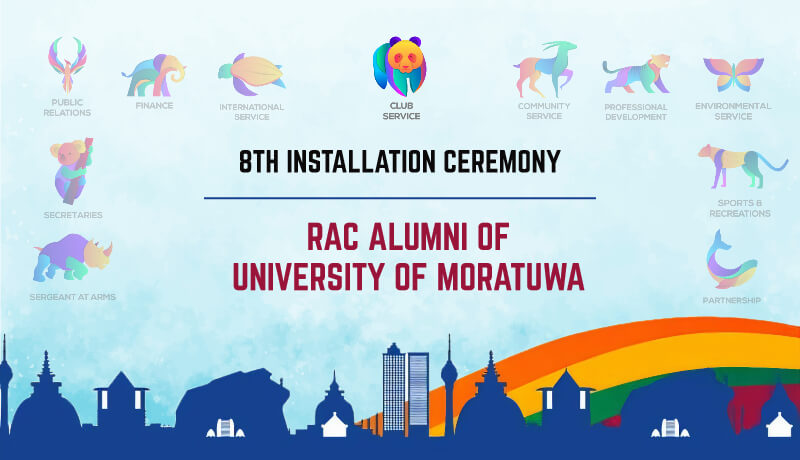 Posted at 20:48h in Installations, Others, Uncategorized by rcuocfmfadmin 0 Comments

The 8th Installation Ceremony of the Rotaract Club of Alumni University of Moratuwa was held on 18th July at the Royal College Union Skills Center Colombo, under the theme of “Embracing Change with Courage”. In light of the unprecedented events faced, the entire event was virtually hosted and Rtr. Nuzhath Rizvi, Rtr. Rashini Himasha, Rtr. Samith Nethumina and Rtr. Yasindu Mendis from the Rotaract Club of University of Colombo, Faculty of Management and Finance witnessed the ceremony through the official Facebook Page of the RAC Alumni, University of Moratuwa. 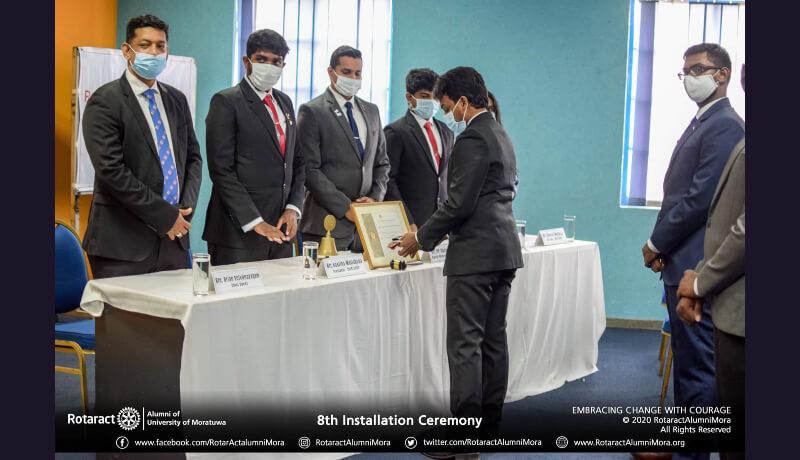 The event was graced by the Chief guest Rtn. PHF Brian Selvanayagam, the Guest of Honor  District Rotaract Chair PDRR Amjath Yoosuf and the District Rotaract Representative Rtn. Rtr. Kasun Sigera.The ceremony commenced with the traditional lighting of the oil lamp and following that, the Sergeant at Arms Rtr. Pamuni Herath called the house to order. Once the formal proceedings; Flag Salutation, Rotaract Invocation, Four-Way Test and the Rotaract Song were concluded, the Outgoing Secretary Rtr. Shenali Welikala addressed the gathering and presented the Secretary’s Report for the Rotaract year 2019/20. The report comprised of the project completions, awards and achievements for the year and her speech ended on a high note as she shared on the screen, a video clip that recapped the wonderful memories of the past year.

The Outgoing President Rtr. Hasitha Prashan then addressed the gathering and shared  his experience throughout the year and further extended his gratitude to all those he supported him. He also expressed his confidence in passing on the baton to an incredible personality, Rtr. Anju Cheran and his exceptional Board. Following that, Certificates of Appreciation were awarded by Rtr. Hasitha Prashan to his board members, who tremendously supported him during the past year.

Next, Rtr. Dulaj Dilshan took over and introduced the Incoming President for the year 2020/21, Rtr. Anju Cheran. He revealed that Rtr. Anju is not only a remarkable and diligent individual but that he also possesses a knack for singing, which has indeed made a significant influence in his Rotaract Journey.

Afterwards, the highlight of the ceremony, the graceful collaring of the President for the year 2020/21 Rtr. Anju Cheran was done by the Immediate Past President Rtr. Hasitha Prashan. 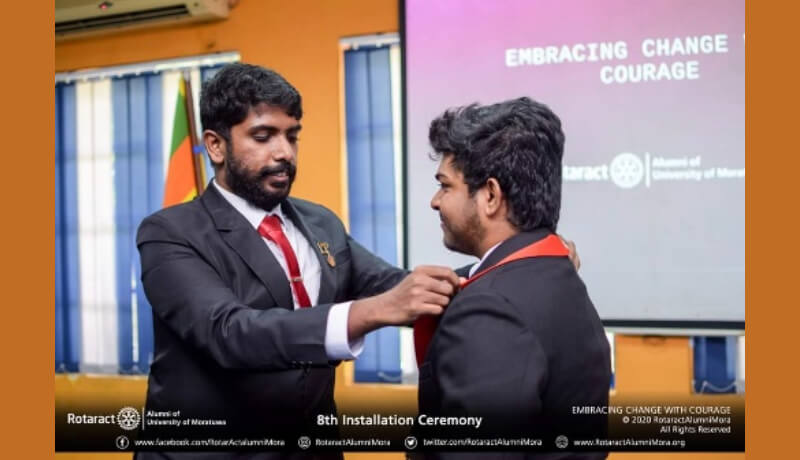 Following that, the newly appointed President Rtr. Anju Cheran addressed the audience and briefed on the year plan and promised that he would work to the best of his abilities, in paving the path for the club to reach greater heights. At the end of his speech, he introduced his Executive Committee and Board for the year 2020/21 by giving enthralling introductions to each and every member. 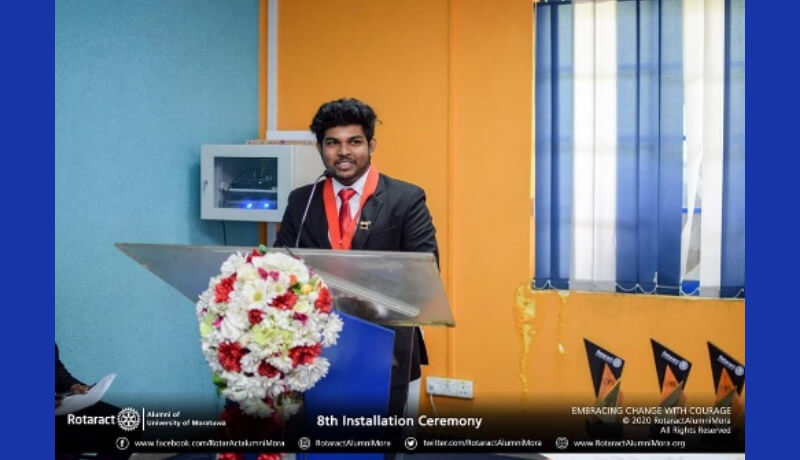 Following the agenda, few dignitaries enlightened those present with insightful speeches and the first to address the gathering was the District Rotaract Representative Rtn. Rtr. Kasun Sigera. He appreciated the strong bond between the members and conveyed his wishes to Rtr. Anju Cheran and his board for a successful year ahead. 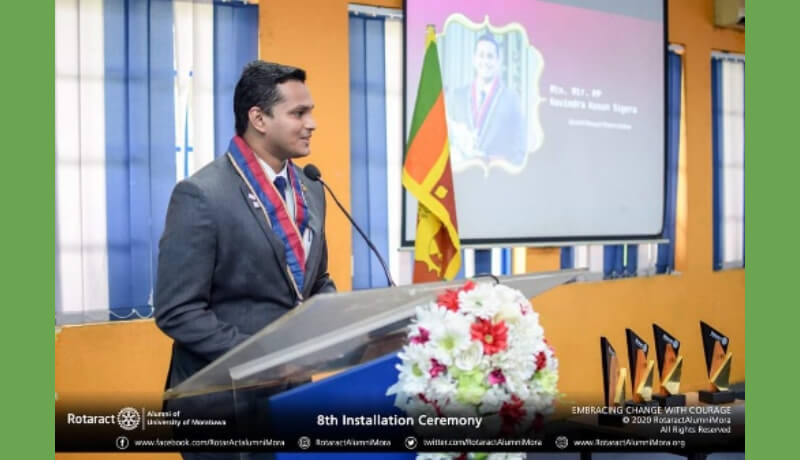 Next, the Guest of Honour, District Rotaract Chair PDRR Amjath Yousuf delivered a speech through which he acknowledged the efforts taken by the club in conducting impactful projects during the COVID-19 pandemic. Following that, the Chief Guest for the day, Rtn. PHF Brian Selvangayam addressed those present and emphasized on the outstanding performance of the club during the past year and especially highlighted the success of Project “West Aid”. Next, Tokens of Appreciation were presented to a few dignitaries who graced the occasion and the felicitations by the fellow clubs took place. The Rotaract Club of IIT and the Rotaract Club of Achievers Lanka Business School were present at the event.

The 8th Installation ceremony of the Rotaract Club of Alumni University of Moratuwa came to a closure with the vote of thanks being delivered by the Secretary for the year 2020/21 Rtr. Chinthani Kumaradasa and afterwards the attendees were treated to refreshments followed by a session of continued fellowship. 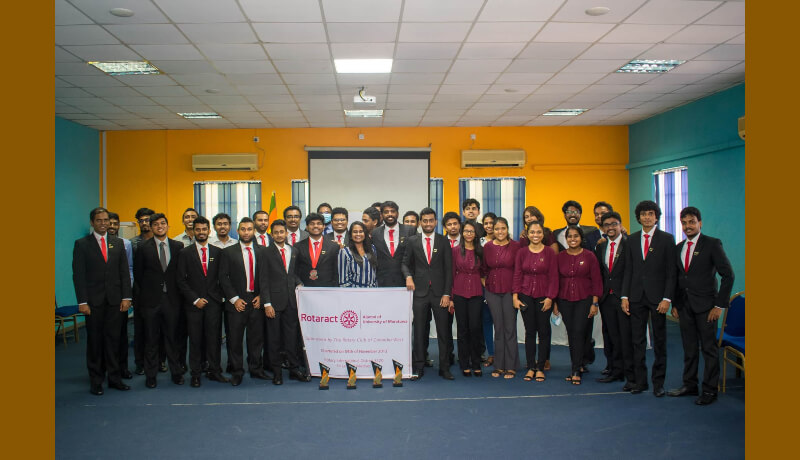 It was indeed a pleasure for the Rotaract Club of University of Colombo, Faculty of Management and Finance to be part of this remarkable occasion and would like to extend its warm wishes to Rtr. Anju Cheran and his Board of Directors for yet another successful year ahead. 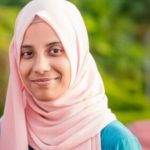 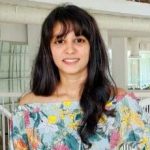