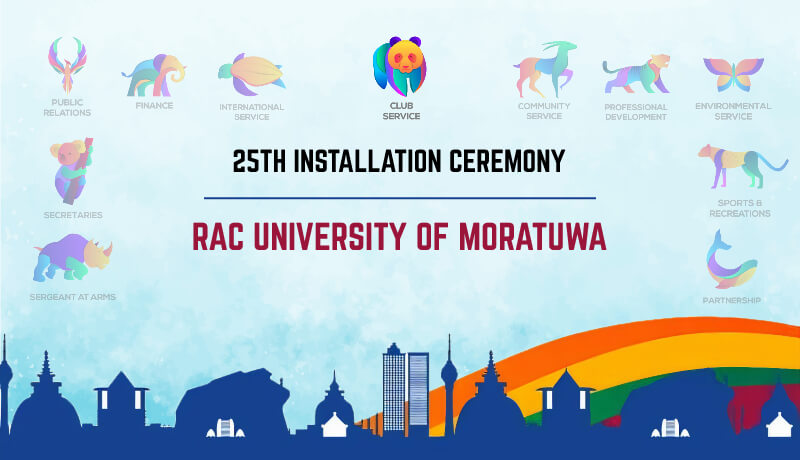 Posted at 02:15h in Installations, Others, Uncategorized by rcuocfmfadmin 0 Comments

Rotaract Mora - A club that has brought glory to not just our country and Rotaract District 3220, but to the Rotaract Movement as a whole, had its 25th Installation Ceremony on the 12th of August at the Summerfields Banquet Hall, Kottawa. However owing to COVID-19 related safety measures, not everyone had the privilege of being physically present. Yet, we were given the opportunity to be virtually present via YouTube and join them as they officially took over the responsibility to turn to a new chapter. 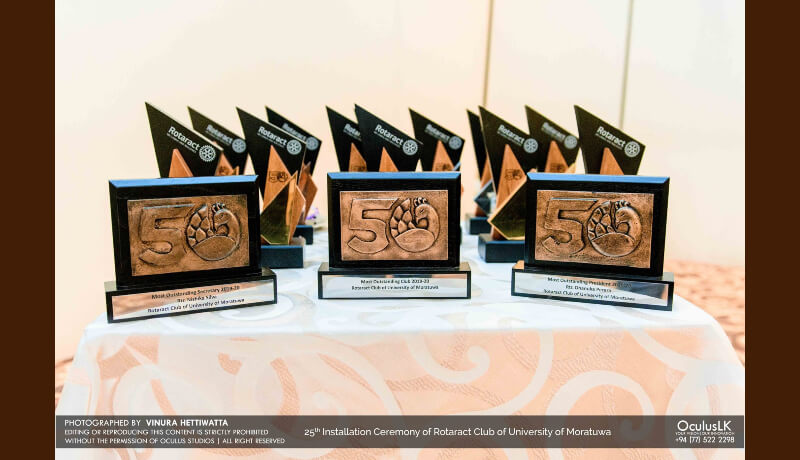 The ceremony officially commenced with the lighting of the oil lamp after which Rtr. Randula Karunarathne called the house to order once the dignitaries took their respective seats at the head table. This was followed by the conventional formalities; The Rotaract Pledge, Invocation, Four-Way Test, Flag Salutation and the Rotaract Song.

Then the gathering was warmly welcomed by the Installation Co-Chairperson, Rtr. Romasha Guruge.

This was followed by the Secretary’s Report for 2019/20 and it was read out by the Outgoing Secretary, Rtr. Nishika Silva who was also recognized as one of the “Most Outstanding Secretaries” at the 30th Rotaract District Assembly Awards. It was revealed that 65 projects had been executed throughout the past year while making sure that the boundaries were re-defined, significant milestones were reached and the legacy was continued in all its glory with a 250+ membership base. To wind it up, a video capturing the essence of their 24th year of service was played. 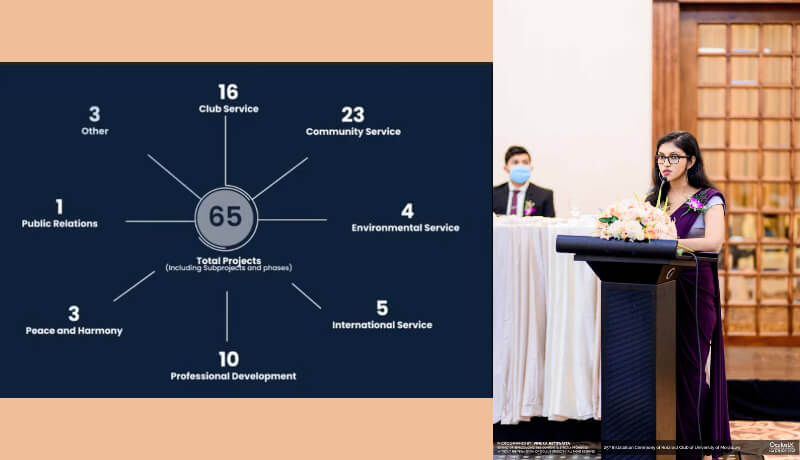 Up next, the Outgoing President, Rtr. Dhanuka Perera, was given an introduction by Rtr. Charith Rajitha from whom we learnt that his impactful journey of Rotaract started off with selling cards for Project Hand in Hand. Before Rtr. Dhanuka Perera took to the podium, a brief video of him in a nutshell was played. And out of the many pictures and descriptions in the video, these two definitely captured our attention! 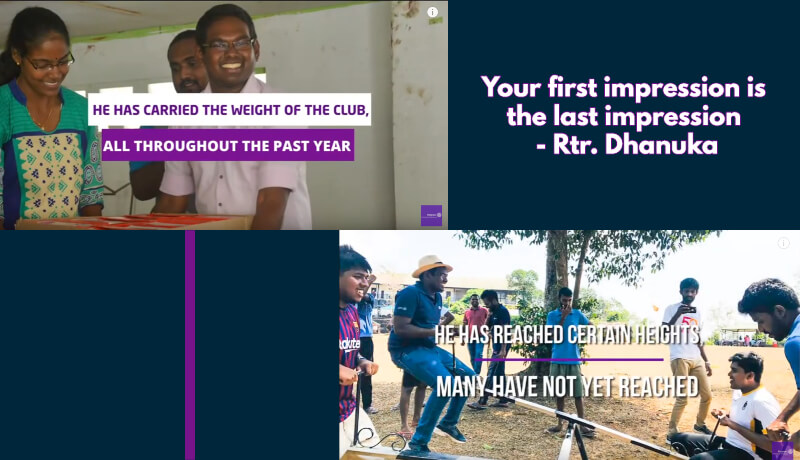 In Rtr. Dhanuka’s address to the gathering as the President of Rotaract Mora for one last time, he mentioned that the club’s journey in the past year was not a roller-coaster ride like how many claim it to be, since his Board of Directors and Executive Committee Members were true leaders who always ensured that everything happened smoothly! But he didn’t fail to state that his emotions may have been a rollercoaster, simply because he was a human and that it was normal to feel so.

After extending his gratitude to everyone who made the club’s journey of excellence a reality, he concluded by quoting Robin Sharma who once stated, “Investing in yourself is the best investment you will ever make. It will not only improve your life, it will improve the lives of all those around you.”

Then tokens of appreciation were given to the Outgoing Board of Directors who later on gifted Rtr. Dhanuka with a special memento.

Before the most special moment of the ceremony, Rtr. Dulinda Perera was invited to introduce the Incoming President – Rtr. Samila Imbulana. Constantly referring to Rtr. Samila as the short fat individual from Ananda College in 2017, Rtr. Dulinda went on to shed light on his qualities and “extraordinary skills” which helped him come a long way since then. “Samila is very innovative in ways unknown to humans” he stated with a subtle sarcastic smile and then continued with some serious appreciation of his creativity.

On a lighter note he also didn’t fail to mention Rtr. Samila’s discovery of his body being a temple! 😀 This interesting introduction concluded with yet another brief video of Rtr. Samila. 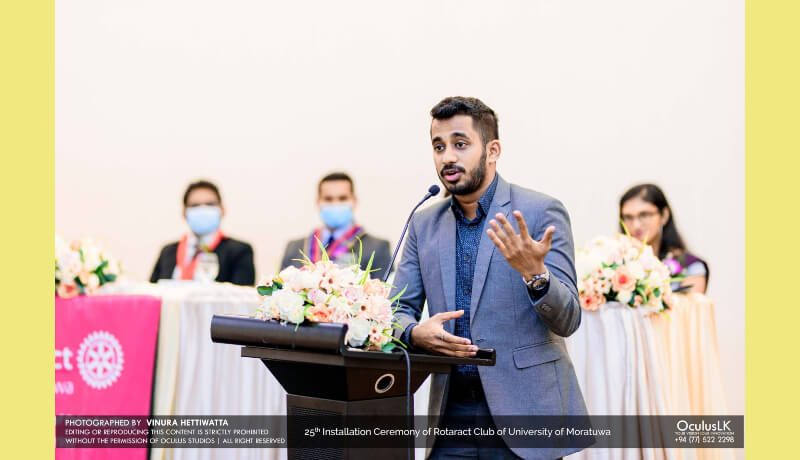 Then arrived the most anticipated moment of the day for Rotaract Mora. Rtr. Samila Imbulana was officially collared as the 25th President of the Rotaract Club of University of Moratuwa by Outgoing President Rtr. Dhanuka Perera!

Officially addressing the gathering as the President for the first time, Rtr. Samila said that it felt surreal to be standing where he was at that point in time as the newly inducted President of Rotaract Mora. In the middle of his speech, he shared a short yet, heart-warming story connected with Project “Are You Ready” which he chaired in 2019/20! (P.S: We at RACUOCFMF will reveal this soon at the right moment. Stay Tuned.)

“Write your own stories to become better human beings” was his final message and he left the audience with the wise words of Brazilian Football player – Neymar Jr; “Where there is 1% chance, there is 99% faith.” 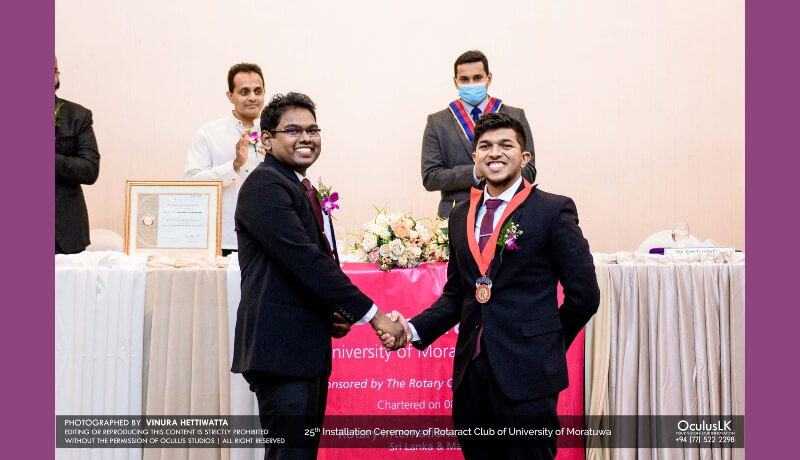 Up next on the agenda was the introduction to the Board of Directors for 2020/21.

The Board of Directors and Executive Commitee for 2020/21 are as follows;

Afterwards, District Rotaract Representative for the year 2020/21, Rtn. Rtr. PP. Kavindra Kasun Sigera addressed the gathering. He started off by briefly describing the Past Club Members who were appointed to the District Steering Committee for 2020/21. Among them were, Rtr. Paveen, Rtr. Himantha, Rtr. Kashuni, Rtr. Dhanuka, Rtr. Charith and Rtr. Hasitha. In conclusion he stated that Rotaract Mora was more than just a club name and more of a brand and thus urged the club to share its beautiful experience with everyone else to learn from it. 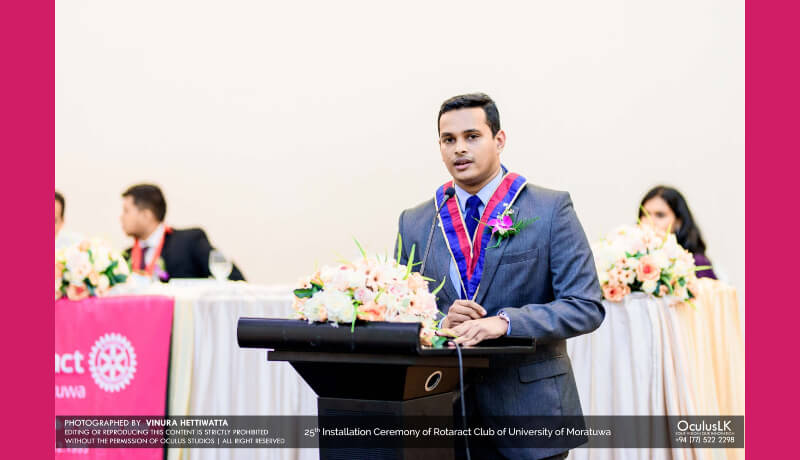 Next, Rtr. Venusara entertained the audience with familiar tunes through his solo performance and this was followed by the District Rotaract Chair – PDRR. Rtn. Rtr. Amjad Yoosuf sharing a few words with the gathering.

A little surprise was given to the audience with the official release of the club’s new website and blogging platform and it truly justified the fact that they are one of the clubs which spearhead innovation and digital revolution within the movement.

Following this, the Guest of Honour – Dr. Rtn. Rohantha Athukorala shared his thoughts with the audience on how we as Rotaractors could come up with more projects that will shake Sri Lanka for a better tomorrow. While appreciating the efforts taken by the Rotaract Club of Kelaniya to “Stop the Spread”, he simultaneously challenged Rotaract Mora to come up with such novel initiatives with the promise of assisting them in terms of commercialisation. 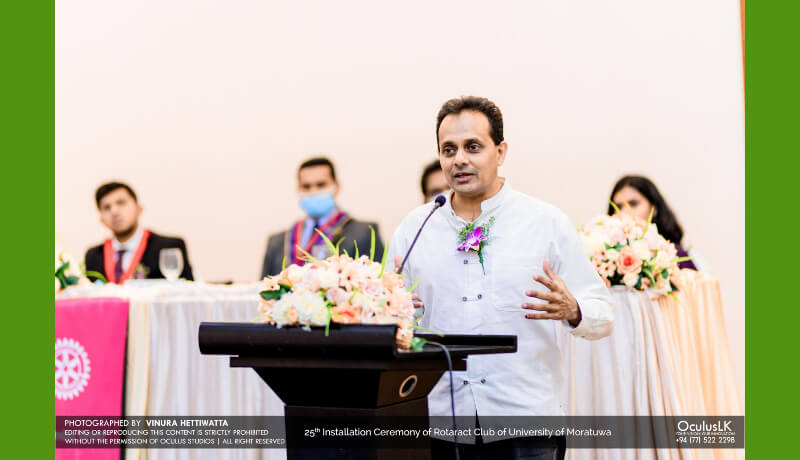 Prior to the distribution of tokens of appreciation to the dignitaries who graced the occasion, Rtr. Thishani Wijayaratne addressed the gathering on behalf of the President of the Rotary Club of Colombo West - Rtn. PHF. Brian Selvanayagam.

The 25th Installation Ceremony of Rotaract Mora was terminated for fellowship and refreshments after the stage was being opened for felicitations, followed by the Vote of Thanks being delivered by the Secretary for 2020/21 – Rtr. Leesha Samadhi 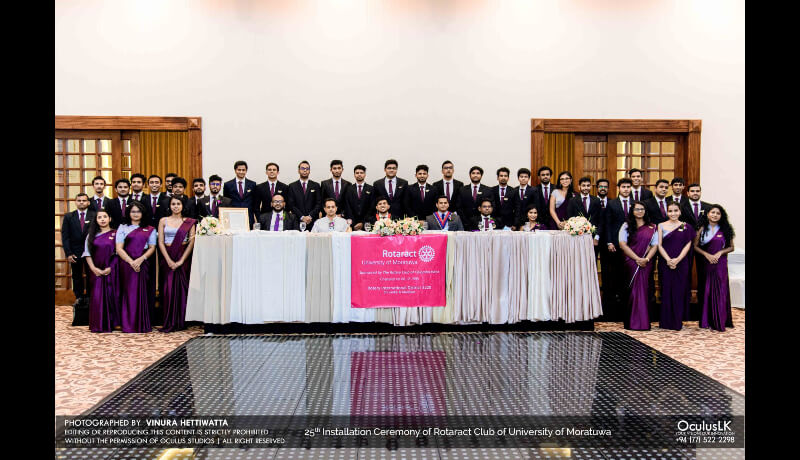 It was indeed a pleasure for the Rotaract Club of University of Colombo, Faculty of Management & Finance (RACUOCFMF) to virtually be part of this occasion and would like to extend its warm wishes to Rtr. Samila Imbulana and his Board of Directors for yet another “Outstanding” year ahead with the club’s cherished fraternity!

Furthermore, we at RACUOCFMF would also like to extend our heartiest Congratulations to our present Guide Club Coordinator, Rtr. Dhanuka Perera on a job well done as the Immediate Past President of Rotaract Mora! Together with your team, you’ve explored, developed and served to the best of your abilities, while showing resilience to all trials and tribulations.