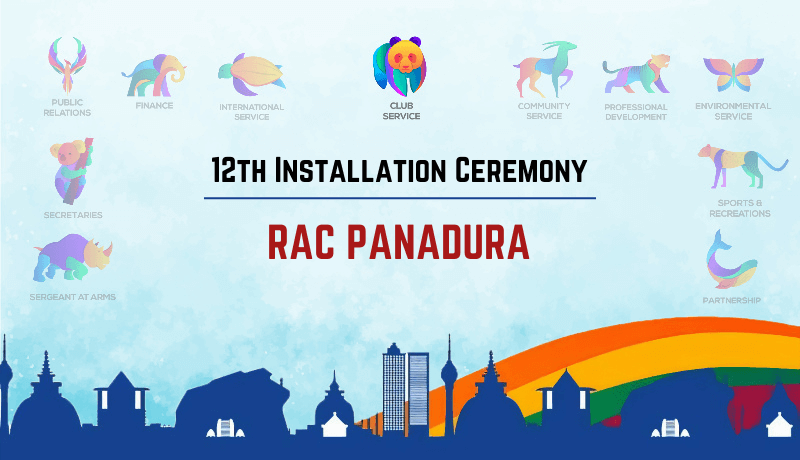 09 Sep 12th Installation Ceremony of the Rotaract Club of Panadura

Posted at 08:09h in Installations, Others, Uncategorized by rcuocfmfadmin 0 Comments

The 12th Installation Ceremony of the Rotaract Club of Panadura was held on the 26th of July via Youtube. President Rtr. Aamina Ismail, Rtr. Dulan Prabashana, Rtr. Shakila Perera and Rtr. Kavisha Dahanayaka from RACUOCFMF were virtually present at the delightful ceremony which marked the beginning of yet another successful year of RAC Panadura.

The ceremony commenced with the lighting of the oil lamp by the dignitaries and following that, the Sergeant-At-Arms called the house to order. After the Formal Rotaract Proceedings; The Flag Salutation, Rotaract Invocation, Four-Way Test, and the Rotaract Song were concluded, a warm welcome was given out to the gathering by the Co- Project Chairperson, Rtr. Yohan Rajapakshe. 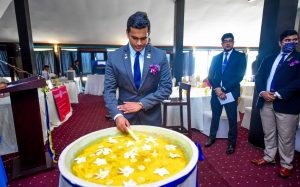 It was followed by the Secretary’s Report for the year 2019/20 presented by Rtr. Sanduni Hettigoda. She recalled the remarkable memories and stated that the year had seen the successful completion of 18 projects. Afterwards, a nostalgic video clip which included cherished moments and memorable photographs was shared on the screen and moments before she signed off she conveyed her heartfelt gratitude to the members for the immense dedication and commitment rendered throughout the year.

Next, the Outgoing President Rtr. Shihan De Silva was invited to share a few words and he proudly spoke of the wonderful experiences and memories made during his presidency. He further extended his gratitude to his exceptional board and club members for their tremendous support.

Next up the Incoming President Rtr. Sanduni Hettigoda was introduced with an excitement filling slideshow which indeed turned out to be a highlight of the special day. The most significant moment arrived next. The outgoing President Rtr. IPP Shihan de Silva officially handed over the duties and responsibilities of the Rotaract Club of Panadura by collaring Rtr. Sanduni Hettigoda as the President for the year 2020/21. 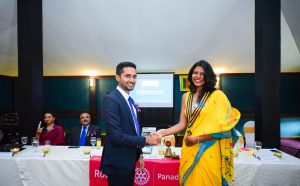 Momentarily, the newly appointed President Rtr. Sanduni Hettigoda addressed the gathering setting the tone from the very beginning stating “I give up on giving up”. She briefed on the year plan and highlighted that they intend on executing impactful projects while adding value to the members. Afterwards she introduced her competent Board of Directors for the year 2020/21. 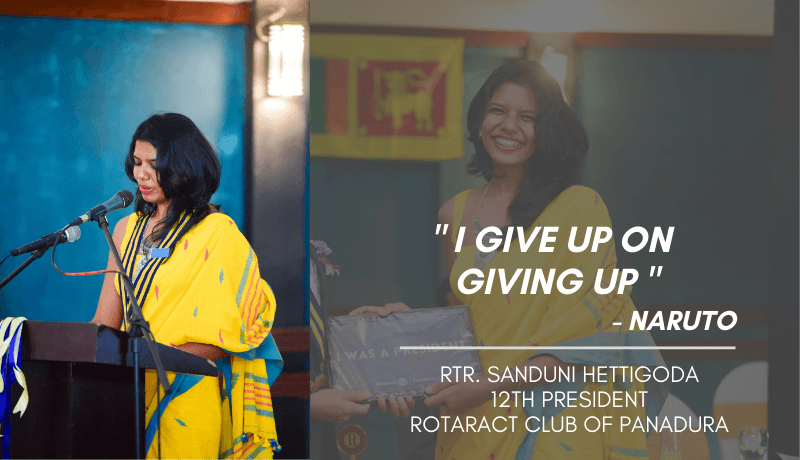 The next event on the agenda was the speech delivered by the District Rotaract Representative Rtn. Rtr PP Kasun Sigera. He appreciated the Projects that were successfully completed during the past year and further explicated the importance of novelty and innovation in a modern dynamic world.

Afterwards, the gathering was addressed by the Co- District Rotaract Chair 2020/21, Rtn. Danya Udukumbura. She spoke about the challenges in the modern era and ways in which we can overcome them. She also made note of the importance of the affiliation of Rotaractors and Rotarians and concluded her speech by sharing her thoughts under the theme, “What you believe, you become.” 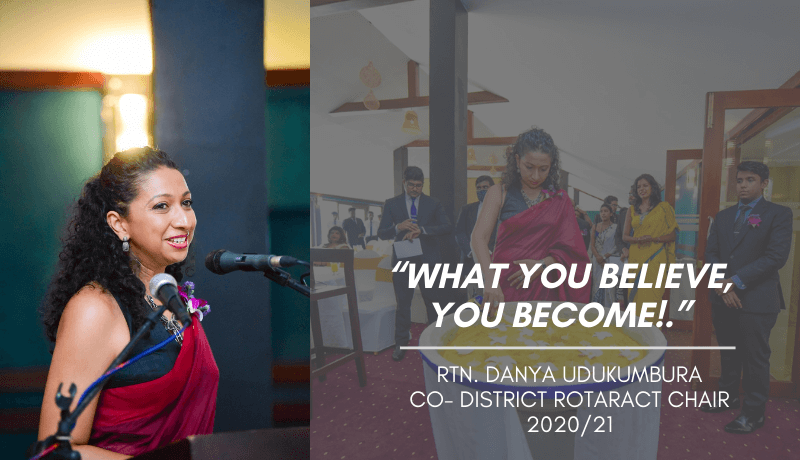 Next, the audience was entertained with a beautiful instrumental performance by a bunch of talented members. Then the Guest of Honour and Keynote Speaker for the day, District Membership Chairman 2020/21, Rtn. PHF PP G.S. Sylvester addressed the gathering. This was followed by the speech by the Chief Guest and the President of the year 2013/14 of Rotaract Club of Panadura, Rtr. PP Asitha De Silva. Finally, the memorable evening came to a closure with the presentation of the tokens of appreciation followed by the felicitations by the fellow clubs. 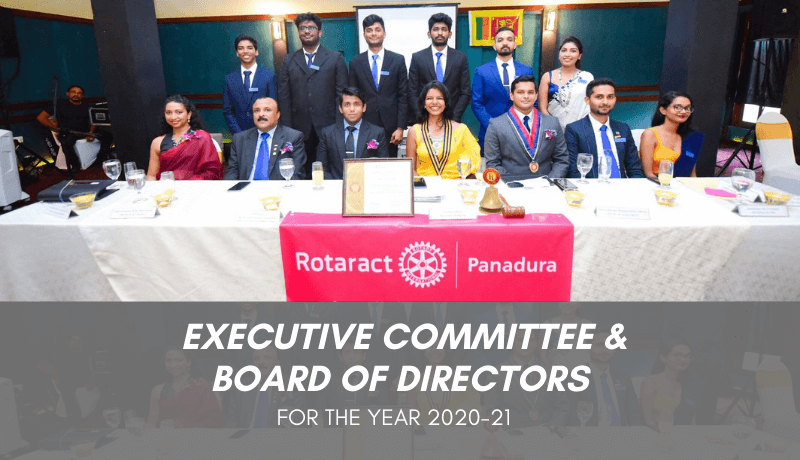 It was indeed a pleasure for The Rotaract Club of University of Colombo, Faculty of Management and Finance to be part of this remarkable ceremony and would like to extend its heartiest wishes to Rtr. Sanduni Hettigoda and her board for yet another successful year ahead! 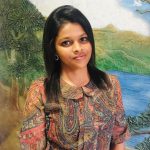 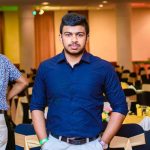