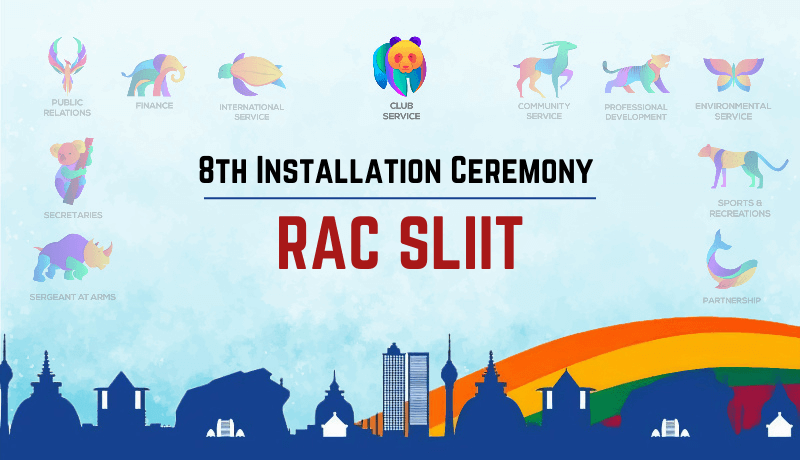 18 Sep 8th Installation Ceremony of the Rotaract Club of SLIIT

Posted at 20:43h in Installations, Others, Uncategorized by rcuocfmfadmin 0 Comments

The Rotaract Club of SLIIT turned over a new leaf this year with the 8th installation ceremony held on the 9th of August 2020 at the New Townhall Auditorium. This was the first physical installation ceremony conducted during these challenging times by taking necessary safety precautions and by strictly adhering to the health guidelines. The phenomenal event began with the arrival of the guests and lighting of the special lamp made by one of the very own members of the Club and was immediately followed by the Conventional Rotaract Formalities. Next, the Project Co-Chairperson Rtr. Ishini Weerasinghe warmly welcomed everyone to the ceremony and following that the Outgoing Secretary Rtr. Thathsarani Wickramarachchi presented the Secretary’s Report for the year 2019/20. 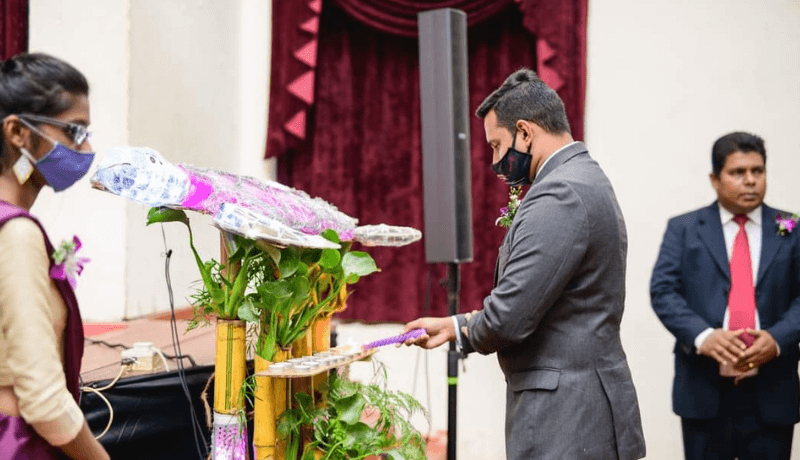 Thereupon, the crowd was addressed by the Outgoing President and in her moving speech, she expressed how grateful she was for the tireless commitment of all the members and for all those lasting memories. After the distribution of the Presidential Appreciation Awards, Mr. Sahan Jayalath who is an ‘Amba Yaluwa’ of the Incoming President Rtr. Keheliya Rajaguru (AKA Kesel), was invited to introduce the Incoming President. He nearly roasted Rtr. Keheliya but in a sweet way though, with a video which was hilarious yet full of memories. Then came the moment everyone’s been holding their breath for, Rtr. Keheliya Rajaguru was collared as the 8th President of Rotaract Club of SLIIT by the Outgoing President Rtr. Duleesha Waidyarathne. 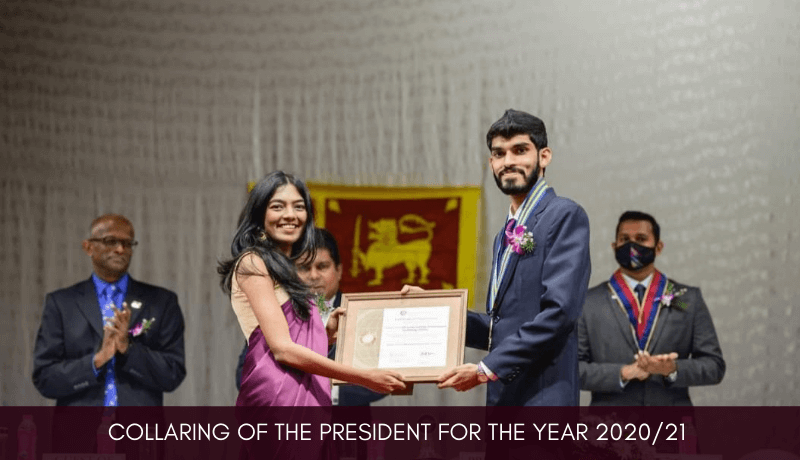 Following the official handover, the newly appointed President addressed the gathering where he thanked the Past Presidents for their guidance and talked about leadership, integrity, gratitude and teamwork. He urged his team to strike forward saying, “You may fear and stumble, but I will always be there for you, to have your back as you have mine”. Right before inducting the board members, the Immediate Past President Rtr. Duleesha Waidyarathne was given a Token of Appreciation for her unwavering commitment towards the Club. Then the Board of Directors for the year 2020/21 were introduced by the President. 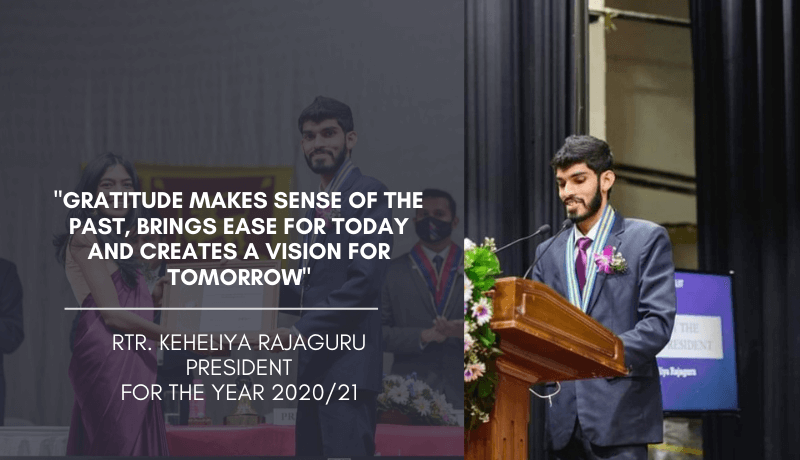 Shortly after the induction of the Board Members, the District Rotaract Representative Rtn. Rtr. PP. Kasun Sigera delivered a speech in which he pointed out how the club has evolved over past years and that the Rotaractors must connect with each other to achieve greater heights in the years to come. Before winding up his speech, he congratulated the newly appointed President and his Board of Directors and wished them success in their future endeavors. 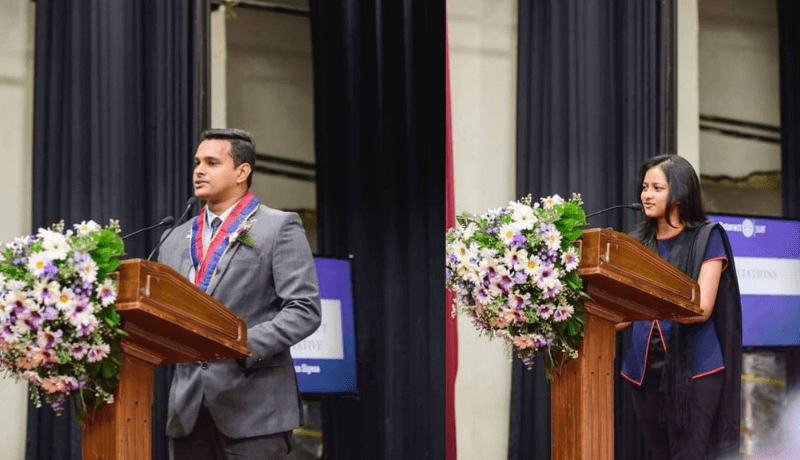 Furthermore, the Guest of Honor, Co-District Committee Chairperson, Rtn. Jude Surenthiran, the President of the Rotary Club of Battaramulla, Rtn. Sri Kandasamy and the Chief Guest of the day, Senior Manager Administration and HR at SLIIT, Mr. Panduka Mallawarachchi addressed the gathering and afterwards the guests and the dignitaries were given Tokens of Appreciation by the President. Finally, the spectacular day filled with bittersweet moments came to an end with the Vote of Thanks delivered by the Secretary, Rtr. Vinuri Galagoda. 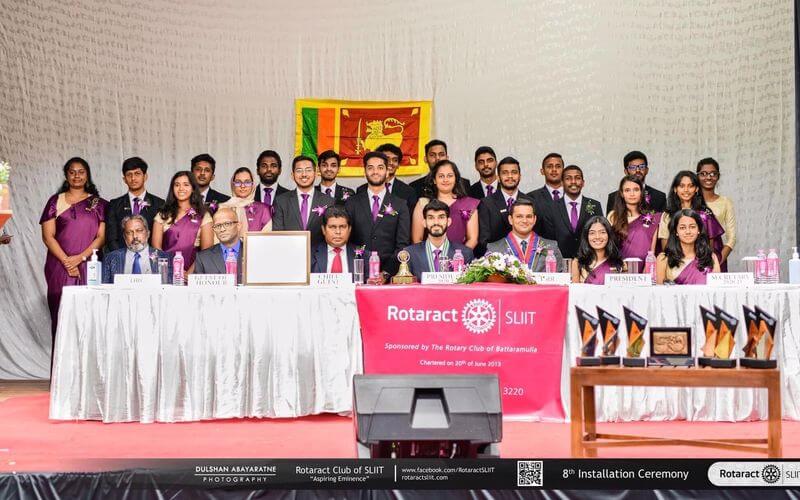 RACUOCFMF takes great pleasure to have been a part of this milestone in the Rotaract journey of Rotaract Club of SLIIT and wishes Rtr. Keheliya Rajaguru and his brilliant team a wonderful year ahead. 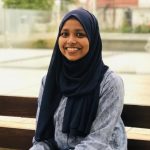