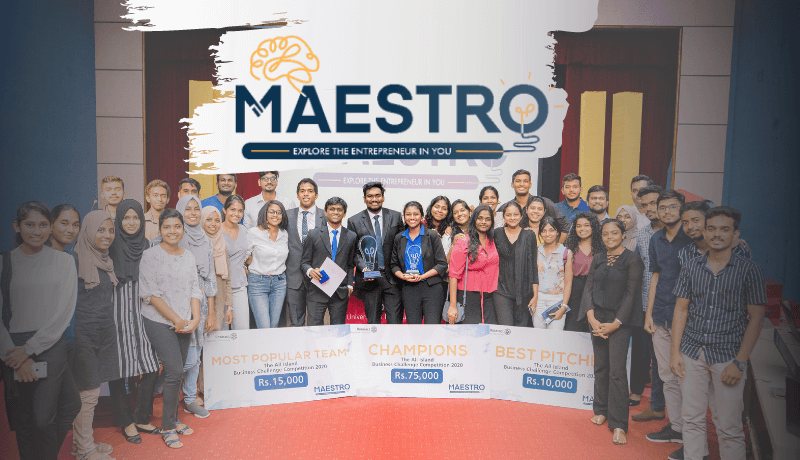 Posted at 21:39h in External Club Events, Others, Uncategorized by rcuocfmfadmin 0 Comments

The bold bearers (BB) were a bunch of active Rotaractors who were living the usual undergraduate life (කනවා, බොනවා, lectures යනවා), then MAESTRO 2020 happened. It was overnight prestige, on the 30th September – the day of the Grand Finale (exactly two weeks ago from this very moment) for these effervescent undergrads who were competing against four challenging teams from the University of Moratuwa.

The team embarked on this journey after listening to the encouraging, rather challenging words of Rtr. Aamina Ismail (President of RACUOCFMF) and the constant nagging of Rtr. Oshadi Dias who kept chanting “අනේ Arshad, team එකක් හදාගෙන යමු ?”, and thus ensured that the club participates in Maestro 2020 to continue the “Tradition” of winning Maestro consecutively for the last 2 years (3 years back-to-back now). The team comprised of Rtr.Arshad (Captain), Rtr.Saseni, Rtr.Lakith, and Rtr.Harith.

There were 2 stages to qualify from, before entering the Grand final and here is how the Bold bearers faced them; the preliminary round was the toughest in terms of cracking the business case and figuring out a way to present it on PowerPoint Slides. With no high expectations but also making sure we give our best shot at it, the BB's managed to get through to the Semifinals (round 2) in which we were to present our hypothesis to a panel of judges via a virtual platform.

Now this is where the drama started! With our scripts well written and practiced the Bold Bearers were fully suited up (Fully කිව්වට, fully ම නෙවේ). Now this is what happened during the dramatic Semi Finals. 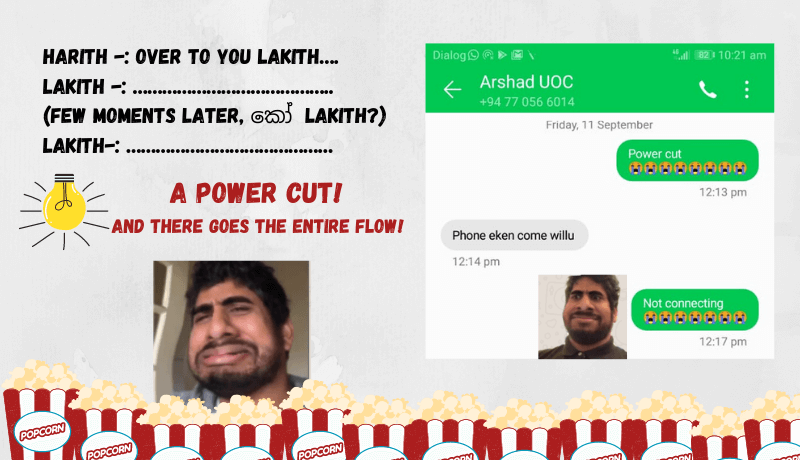 Dreams Shattered! we knew we’ve underperformed, but we were flabbergasted to find out that the panel of judges saw us as one of the contenders for the Grand final.

The grand finals took place in two stages. The first being a 3 hour session on the 26th of September, locked in with no Internet and given an extension to the case which had to be cracked in the given time. Those were the fastest 3 hours we’ve ever come across in our lives, however we managed to submit the solution just-in-time which resulted in a series of panic attacks here and there by Rtr.Saseni. If anyone’s unclear of what exactly we did, we cracked the case and prepared the deck of slides that was on display on the 30th! Yes all that within 3 hours!

Stage two of the finals, figuring out how to present it to the audience! Amidst our busy schedules and other personal commitments, which we believe every other team had too, we rehearsed our presentation a number of times until we were confident that we could wrap up the presentation in approximately 8 minutes – which was the given time limit for a team to pitch in their idea. A couple of sleepless nights (කළින් දවස රෑ විතරය්!) and rigorous rehearsing sessions in the university premises made sure we were fit to compete on the day of the finals. 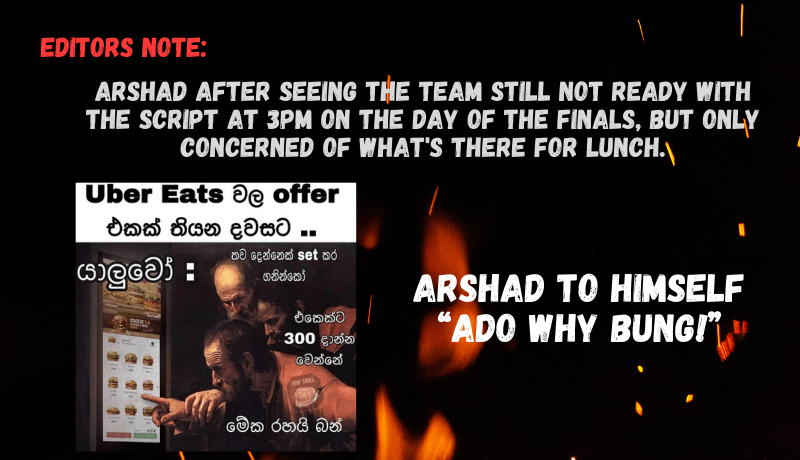 The day had finally arrived! And we were backed by the ever-strong support and wishes from our beloved colleagues in the Faculty of Management and Finance (FMF). The venue was packed with around 120 fans to witness the finalists battling it out to decide which team will emerge victorious. Nervous energy was experienced at a different level by the Bold Bearers just minutes before we were to present on stage. Finally, the time arrived, and the team was called on stage.  Arshad gave a fiery start in presenting the solution, which was taken over by Lakith, Saseni, Harith and back to Arshad who concluded the presentation and were into the Question N’ Answer session, answering questions asked by renowned corporate names, the “Bold Bearers way” (With some next level ගැම්ම!)

Missed it? Rotaract Mora has got you covered. Do watch the first few minutes of the Facebook live below.
https://www.facebook.com/maestro.rotaractmora/videos/675513430011746/

The contestants waited impatiently till the end, to know the results. There were several awards up for grabs, namely: The Champions, The Most Popular Team, The Best Pitcher award. So, the panel had made their decision. Rtr.Saseni Wijegunawardane (SASSY-EENI !!) from Team Bold Bearers, representing RACUOCFMF, won the award for the Best Pitcher! And The Most Popular team was announced as once again the Team Bold Bearers screamed in joy along with their supporters who voted the team to achieve this award. And then came a dream ending which we thought of it only as a mere dream with no real expectations, that was to bag them all, to whitewash the finals claiming all possible award.  Yes! The Bold Bearers claimed the Championship title that is for the 3rd consecutive time from the University of Colombo, Faculty of Management and Finance (FMF). It was days and nights of working hard together towards one objective that brought the Bold Bearers to the spotlight. 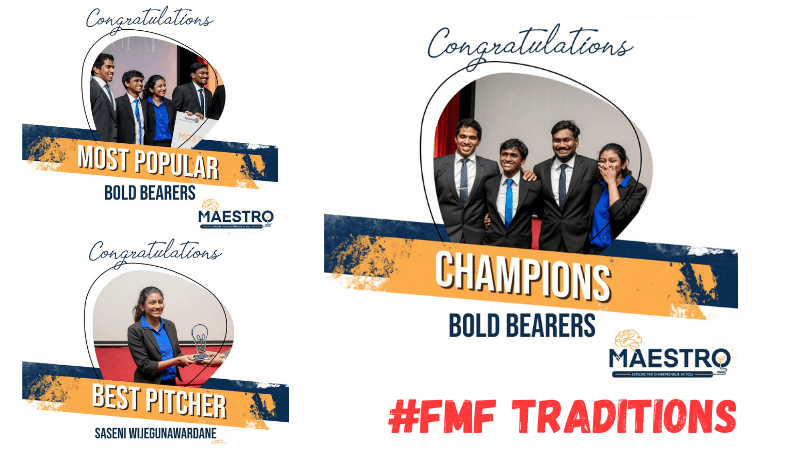 We as a team would like to extend our gratitude to Mr. Ruzni Faik, University of Colombo Alumni, fondly known as “Ruzni Aiyya” for his constant support and knowledge throughout the journey of Bold Bearers, and to the RACUOCFMF family for being the reason for being able to be The Most Popular Team of the day and for being the cheering squad chanting the famous FMF! FMF! FMF! Cheer, we couldn’t have done without. 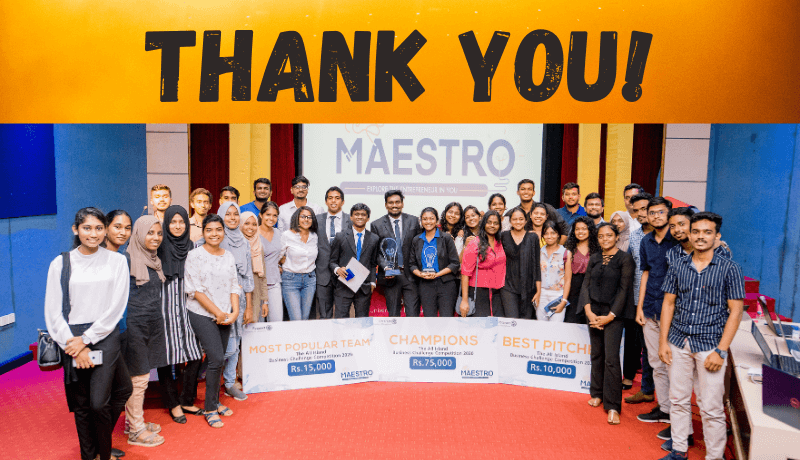 This is team Bold Bearers signing off with a promise to be back with a new bunch to carry on the tradition! 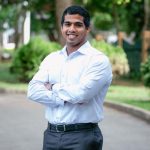 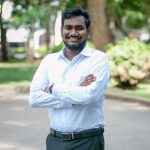