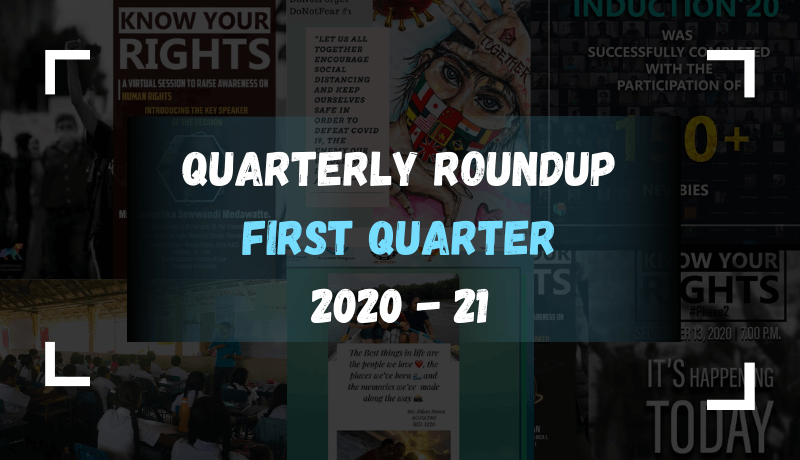 Posted at 18:44h in Round Ups, Uncategorized by rcuocfmfadmin 0 Comments

Here is a recap of how our First Quarter unfolded;

E-RYLA – With the lockdown in operation District 3053 took up the challenge to take RYLA virtual and was immensely successful in doing so which was proven by the avid participation of 100+ participants from various different clubs across borders. Representing the Rotaract Club of University of Colombo Faculty of Management and Finance Rtr.Tharindi Dharamwardhana was placed first in the “Aatmanirbhar” task while Rtr.Visula secured a runners up position in the “Happy Trails” task.

UNPFA Photography Competition – Rtr. Jeniff Jameel was placed 3rd Place for this photographic skills as he was able to catch a glimpse of the beauty of streets in Colombo.

Maestro – The initiative organized by the Rotaract Club of University of Moratuwa saw avid participation of approximately 75 teams across the country. Representing FMF were our very own Rtr.Arshad, Rtr.Saseni, Rtr.Harith and Rtr.Lakith. The tradition continued with yet another team representing RACUOCFMF claiming the championship of Maestro for the 3rd consecutive year since its inception. It was a clean sweep as Rtr.Saseni bagged in the award for the Best Pitcher and team overall was awarded as The Most Popular Team.

Project Arambayak’ 20 marked the end of another momentous year at RACUOCFMF and the beginning of new hopes and commitments through comradeship. While congratulating the newly appointed Club President and Secretary Rtr. Aamina Ismail and Rtr. Kulani Salgado respectively, Project “Aarambayak” was held on 18th July for the 4th consecutive year with the aim of obtaining blessings from the four main religious doctrines for yet another euphoric year for RACUOCFMF.

Amidst all the barriers faced due to the global pandemic, the project saw the participation of few avid members representing the entire club visiting the Vajira Kovil in Bambalapitiya, the “Meththaramaya” Temple Bambalapitiya, St. Mary’s Church Bambalapitiya, and finally the “Dewatagaha Jumma Masjid”.

The members also distributed homemade packets of lunch to the less fortunate with the genuine hope that this little act of kindness would just be the beginning of a journey where we would rise up by lifting others.

Stop the Spread – Beyond COVID-19

The Rotaract Club of University of Colombo, Faculty of Management and Finance took to heart to contribute to COVID-19 – Stop the Spread through a two-phase project, focused on creating public awareness and personal training on methods of preventing, overcoming, and adapting to the pandemic environment.

The first phase was carried out with the objective of creating public awareness via social media on timely topics connected with the pandemic environment in a creative manner. All posts and videos done under the phase were published on the official Facebook, YouTube, and Instagram pages of the club. It was further broken down into two branches out of which the first was a hand-drawn poster competition and the second being a trilingual series of informative videos to help battle the pandemic.

The second phase focused on providing essential training to Dadigamuwa Vidyalaya in Habarakada on important aspects of the COVID-19 Pandemic. The training was provided for the students of the school from grades 9, 10, and 11, during which the club educated the students on highly relevant information, which were obtained from Doctors beforehand. Important topics such as how to stay safe in the current context, changing their lifestyles according to the new normal, tips to remain healthy were covered during the training.

The Annual Induction of the Club was held on Wednesday, the 06th of August 2020, via zoom. The session began at around 10 am with the virtual participation of more than 140 freshers who were extremely enthusiastic and excited to be a part of RACUOCFMF. The program that spanned for 2 hours started off by breaking the ice and the members were given a brief insight into the Rotaract movement and the avenues pertaining to it.

Next in the agenda was the most awaited moment of the induction where all members were split into groups prior to the induction and were given certain tasks of which one was to create a short video clip introducing themselves. The creative videos were then displayed on the screen and then it was time for some exciting online games. The teams yet again battled it out in a fun Pictionary and an ultimate winner was chosen. As the saying goes, ‘Every good thing must come to an end’, the wonderful event and an extremely memorable day which marked the beginning of an incredible journey came to a closure with the feedback delivered by a newly inducted member, Rtr. Gayan Jayasinghe.

MIND THE GAP’ is an initiative by the Rotaract Club of DYP ACS of RID 3131 and many other clubs in the district with the collaboration of Rotaract Club of University of Colombo - Faculty of Management and Finance of RID 3220. The initiative provided a common platform for all Rotaractors worldwide to share their favourite pre-pandemic travel memories or adventures to celebrate World Tourism Day held on the 27th of September 2020. The participants sent in a picture of their favourite memory along with a beautiful description. All the memories were shared through the social media platforms of the joint and participated clubs.

“Know Your Rights” was an educative virtual session on human rights and their practical applications in our lives. The guest speaker for the event, Ms. Danushka Medawatta, a Senior Lecturer at the Faculty of Law of University of Colombo, highlighted several key areas where some very important human rights often get violated. The session was conducted via Zoom and Facebook LIVE on the 08th of August with many avid participants joining in. The speaker elaborated on what human rights are and also touched on the history of such human rights. The participants were hooked till the very end as many historic examples were used during the session, the Black Lives Matter movement in the US is a timely example she used to explicate that not only the developing countries but also how the so-called developed countries face such issues in the modern days.

Know Your Rights Phase 2 was an educational session that was held on the 13th September 2020, via Zoom and Facebook Live with the intention of educating the society on the key roles, importance, and developments of the Labour Law in Sri Lanka. The session was graced by Mr. A Sarveswaran, who is a Senior Lecturer at the University of Colombo, Faculty of Law. Labor Law violations in Sri Lanka are not unheard of. In fact, it can even be interpreted that too many go by unheard. RACUOCFMF recognized this unsettling controversy and came up with Know Your Rights Phase 2 which focuses on Labor Law. The topics of Contract of Employment, Labour disputes, and mechanisms in Sri Lanka to solve it, termination, and its types were touched during the session. The floor was then open for questions from the participants and questions raised were a strong indicator of the success of the session. 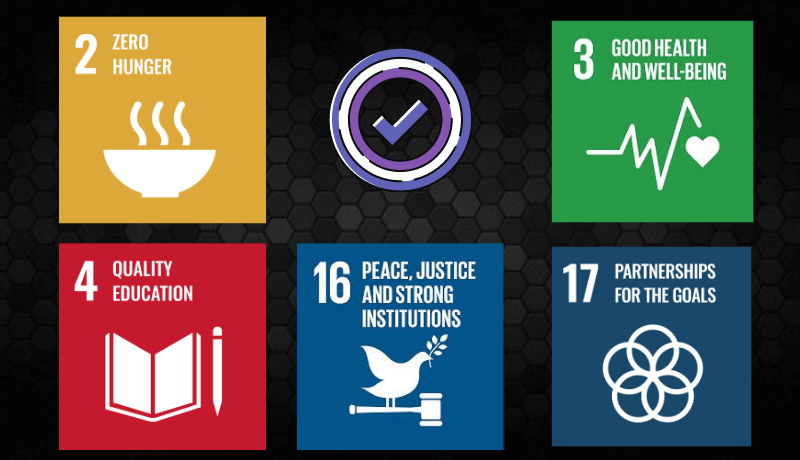 The following Rotary Focus Areas were covered throughout the 3rd Quarter via the projects completed by RACUOCFMF.

The following is a summary of the milestones we achieved as a Club throughout the Quarter.
Number of General Meetings : 04
Number of Board Meetings : 04
Rotaractor of the Months :
Rtr. Abirshanaa Raj - July
Rtr. Chathuni & Thirandi - August
Rtr. Ravisha & Shehani - September

The following are the District Events in which RACUOCFMF took part, during the Quarter.

Next Step - NEXT STEP, a fellowship session for the Presidents and Secretaries of 2020-21, and was held in the month of August. Luckily, COVID-19 had weakened by then and it was time for the most-awaited and the ultimate Leaders’ Getaway! The event was organized by the Rotaract District Steering Committee 2020/21 along with a few other Rotaract clubs including the Rotaract Club of University of Colombo Faculty of Management and Finance. “The NEXT STEP” spanned for two days, the 15th and 16th of August 2020 at the Pegasus Reef Hotel in Wattala.

District Assembly - The 30th Annual Rotaract District Assembly was held on the 4th of July 2020 at Golden Rose. This year’s assembly was rather distinct from the previous ones due to the unprecedented events faced. Nevertheless, the District Steering Committee embraced change and organized this remarkable event in accordance with the health guidelines and it turned out to be quite significant since the majority of the Rotaractors witnessed the event via the virtual platform. The clubs bagged in many awards for the continuous hard work that they’ve put in throughout the year.

District Council Meetings (July | August | September) – Commonly known as the DCM is the monthly official meeting of the District Council and the steering committee for the years 2020/21 of the Rotaract District 3220. The meetings provide great insight into what had taken place throughout the preceding month while both parties, the clubs, and the district update all participants on all important aspects pertaining to the Rotaract movement. The DCM is then followed by fellowship.

Wayamba Fellowship Visit - The 05th of September was indeed memorable to many Rotaractors who made it to the Wayamba Fellowship visit. The crowd flocked to Racecourse early morning and began their journey and had their first stop at the University of Wayamba to partake in their 2nd Installation ceremony of the club. The crowd then took off to visit the Athugalpura Rock and then fled to Hotel Blue Sky to join their fellow Rotaractors from the Rotaract clubs of Athugalpura and Kurunegala to partake in their installation.

Badulla Fellowship Visit - A 3-day fellowship visit with the best of people around is something everyone would love to experience in their lives. Rotaractors from all over were able to make that dream a reality in the Badulla Fellowship visit which started off with a hike in the Namunukula mountain range followed by a night spent with a campfire. Thereafter the Rotaractors were able to partake in the installation ceremonies of the Rotaract Club of Univerisity of Uva-Wellassa Badulla and the Rotaract Club of Ratnapura.

Yaluwa Training Session - Project Yaluwa embarked with the objective of rebranding the World Down Syndrome Day celebrations, which have been carried out by the Rotaract District 3220 for the past 8 years. The training program taught the participants of host clubs how to take care of, behave around, and deal with those with down syndrome, with patience and empathy.

The following are the events RACUOCFMF participated in, which were organized by other clubs during the First Quarter. 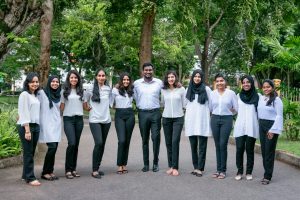