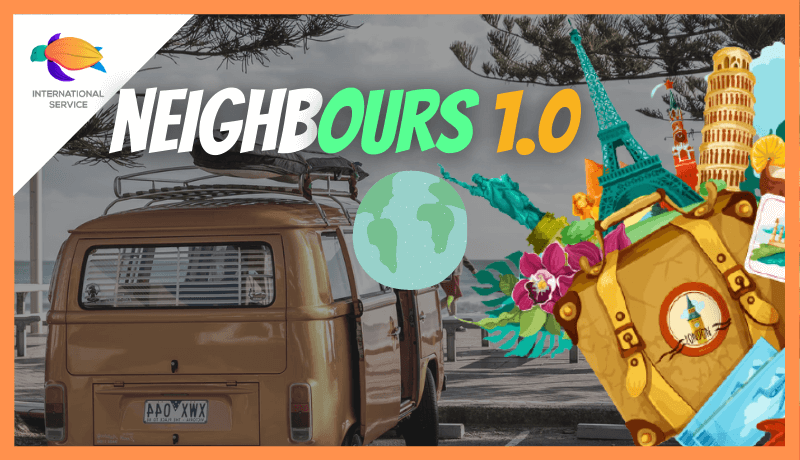 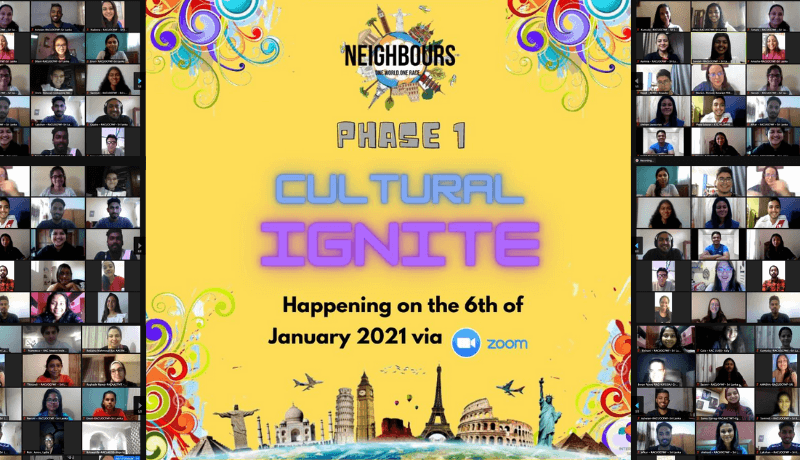 The phase one of Neighbours 1.0 namely, “Cultural Ignite” was held via Zoom on the 6th of January 2021 with three different time slots as of our neighbour participants’ different time zones. It became a virtual gathering where everyone got a chance to get to know each other and their respective diverse cultural backgrounds as fulfilling the project’s core focus. And this get together was carried out in three activity stages.

First stage began with participants introducing themselves and sharing their personal experiences during the pandemic period, after an introductory session given by our club organizing committee. While it was a great opportunity for all our neighbours to learn about their fellow participants, they also got the chance to witness various cultures and diversities of many countries from the amazing short videos created representing their respective country’s culture. It was indeed as if being taken for a free tour around the world, rounded up for a few minutes.

Moving on to the second stage, it was a time to have a little bit of fun among the participants playing “Virtual Bingo”. 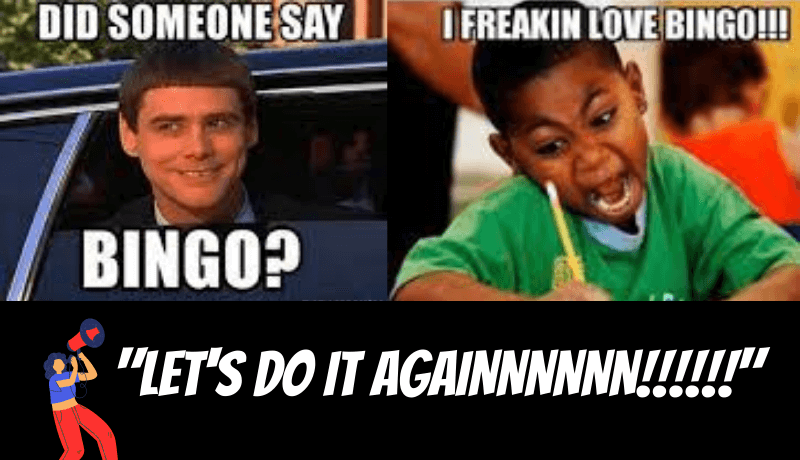 And there were three winners from each time slot. Even though it took a while for the participants to grasp the process of the game, they did not hesitate to shout out saying ‘BINGOOO’ once they did even just finished cutting only one row. And it was evidently a fun experience for all of us.

Then moved onto the final and the most interesting stage of this phase of the project, which was the “Cheers session”. This session included all participants having to look at pictures that were displayed on the screen and guess the correct answer with the help of the hints given provided by everyone else. It consisted of 6 different parts where the guessing had to be done on song titles, movies and TV series, food items, gibberish lines, and riddles. Everyone was deeply invested in the game and their enthusiasm was apparent with all the shouting. It was indeed a successful session where all our neighbours interacted with each other in a very free and friendly manner as if they have known each other for a long time.

With that, we concluded the first phase, “Cultural Ignite” giving a great opening to the project “Neighbours 1.0” while inviting all our participants to join us in phase two. 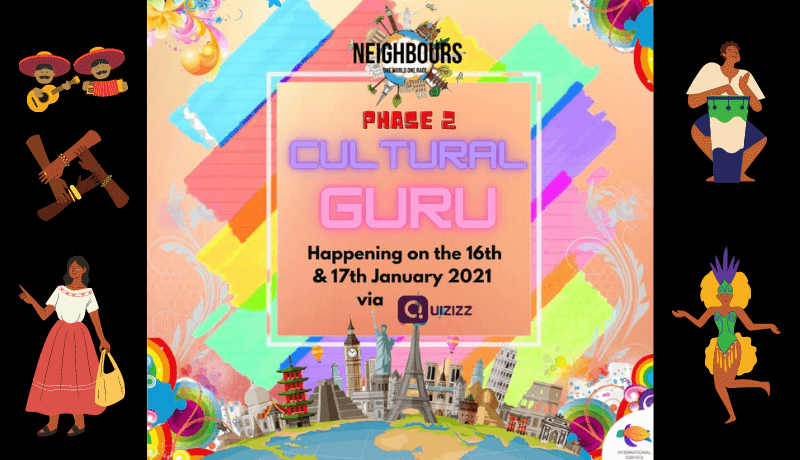 On the 17th of January the second phase of “Neighbours 1.0” namely, "Cultural Guru" the quiz competition took place via Quizizz.com platform. The questions were made to assess the general knowledge of the cultures of the neighbouring countries. The quiz lasted for 15 minutes where each question was to be answered within 20 seconds.

It was not merely a quiz to attempt but also an opportunity to brush up their knowledge as the correct answer appeared before them when they answered it wrong. The score was based on 2 factors, the correct answer and time. So whoever answers faster, gains more points.

It was a challenging session for the contestants as they were unconsciously competing with each other to collect their attractive reward. The conqueror was given the option to choose between the two gift cards Amazon and iTunes.

There was a moment when we questioned ourselves "Was the quiz too easy?" because to our amazement one participant got all the 30 answers correct. Many of our Neighbours claimed that it was an interesting quiz. Here are some marvelous comments we received.

"It was fun! Nice questions! We surely learned something new"

"There were many mango shells (traps to confuse)"

"It was great. There were a few I didn't know about! So it was cool to learn too"

"They were fun. Not exactly hard"

"I wish we can do something like that again. It's actually my first experience and I liked it even if I scored low"

We were thrilled to witness such admirable remarks coming up. In the end, a Malaysian aced the quiz. Rtr.Shakuntala Ram from the Rotaract Club of Segi College Kuala Lumpur bagged the first position by scoring 27570 points. Likewise, we succeeded in the mission of discovering the Cultural Guru among our ‘Neighbours’. 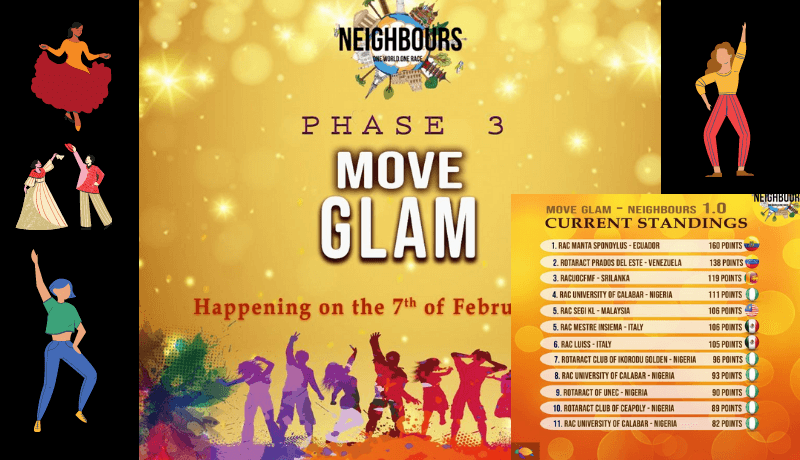 Move Glam is the third phase of Neighbours 1.0, which was a TikTok challenge conducted throughout for three weeks starting from 19th January to 6th of February 2021. Each club was expected to create a TikTok individually or group-wise, showcasing the culture of their respective countries. All these amazing TikTok's sent by participants were posted on our official “Neighbours 1.0” Instagram page as the evaluation was based on the likes and views each video received. And the winner was set to announce at the closing ceremony.

The closing ceremony of Neighbors 1.0 was held on the 7th of February via zoom with the participation of neighbours all around the world. The event began with a moderator, Rtr. Asheian Fernando’s cheerful welcome. Thereupon, our very own co-chairs Rtr. Kumudu and Rtr. Anuji addressed the audience sharing about the journey they’ve come so far and how grateful they are to every single ‘neighbour’ for getting on board with RACUOCFMF to make this event spectacular followed by a video reminiscing the memories from all three phases.

Next on the agenda was the most awaited moment which was to announce the winner of “Move Glam”. Out of many equally amazing TikTok's our organizing committee decided the winner with the highest likes and views. The Move Glam TikTok championship was won by Rtr. Marisela Viteri from the Rotaract club of Manta Spondylus, Ecuador. After which, the winner was announced with a drumroll and the winning TikTok was played.

Then as a way of paying gratitude to all the clubs who joined with us from all around the world to make this event a fun-filled memorable one, moderator Rtr. Asheian announced all the club names consisting of 27 clubs from 18 different countries covering 5 continents.

Subsequently, each club was invited to speak a few words with regards to their experience throughout Neighbours 1.0.

The feedback given by participants were truly amazing and it was so nice to get such wonderful feedbacks where most of them stated that they are looking forward to Neighbours 2.0, which is a good indicator to prove the success of this project.

A little appreciation is a wonderful thing. It makes what is excellent in others, belong to us as well. Next up our very own Neighbours committee, who worked as country representatives in making this project a success gave away a small thanking speech by appreciating each and every participants’ support throughout the project followed by thanking notes of the main pillars of RACUOCFMF, our club president Rtr. Aamina Ismail, Vice president Rtr. Tishani Ranawana and secretary Rtr. Kulani Salgado.

As the saying goes, every good thing must come to an end, an extremely memorable project, Neighbours 1.0 remarked the end of its journey followed up with everyone pausing for a picture to be added to memories of Neighbours 1.0.

It was an amazing opportunity to bond with Rotaractors all around the world. And we, RACUOCFMF would like to express our heartfelt thanks to everyone from the bottom of our hearts for joining with us on Neighbours 1.0 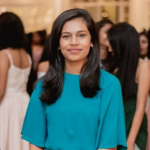 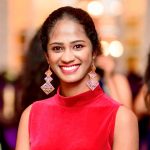 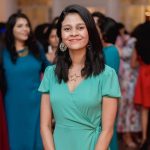 "The strength of the team is each individual membe

The future of RACUOCFMF seems to be in exceptional hands_😎🔥

INCEPTION the annual induction and orientation of RACUOCFMF for 2021 saw the flair of 200+ Creative and Enthusiastic Individuals who are well equipped to carry forward the legacy of RACUOCFMF. ❤🍃
#Rotaract
#Rotaract3220
#RACUOCFMF
#ServeToChangeLives
#inception

Here's wishing Rtr. Malinka Singarachchi wonderful birthday !🥳🎂
May the year ahead be filled with love, laughter and tons of happiness.❤️
Hope your spirit of service adds a sparkle to your life. ✨

It's the day you all have been waiting for🥳🔥

The 3rd and final day of Inception, the annual induction and orientation program of RACUOCFMF will be happening tomorrow 💫😍
#Rotaract
#Rotaract3220
#RACUOCFMF
#StriveAsOne