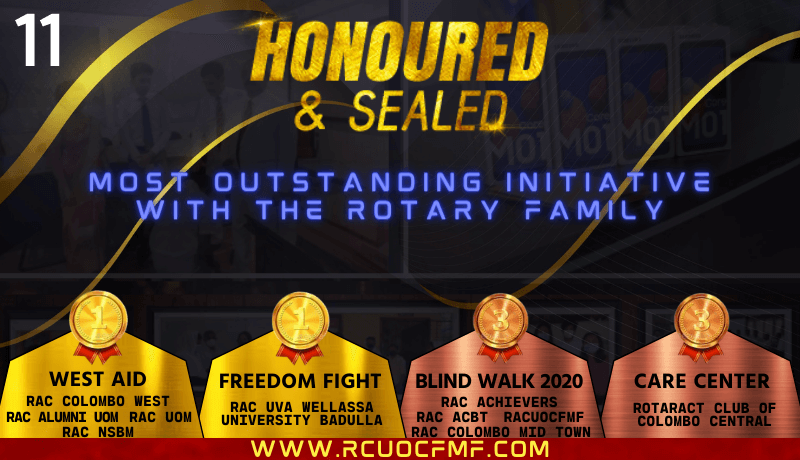 Posted at 19:40h in External Club Events, Others, Uncategorized by rcuocfmfadmin 0 Comments

Promoting fellowship and collaborating with one another to serve the community beyond boundaries is a crucial objective of a Rotary Family. They recognized the value of working in unity, which resulted in creating the most outstanding projects ever undertaken in Rotaract history. Here’s a little hark back of the exclusive projects that were awarded at the 31st Rotaract District Assembly.

Due to the pandemic, the new norm is learning through a virtual platform which has increased the need for digital devices and support services. Sri Lanka being a home for many poor families lots of students were helpless due to this change. That’s why Digital Unite of West Aid 3.0, the joint initiative of 11 Rotaract and Interact Clubs that belongs to the Rotary family of Colombo West, that aimed to provide technological aid for Students Island wide initiated. 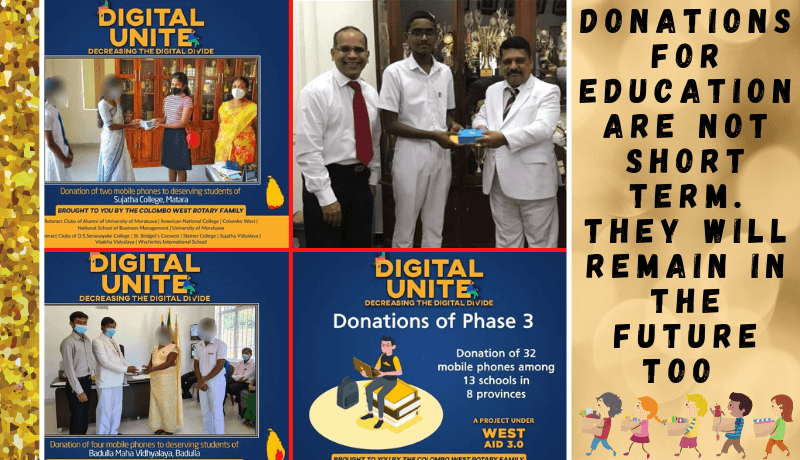 Phase 1 of the project concluded distributing 13 Samsung J2 Core mobile phones and cash to purchase sim cards with zoom packages from Dialog, to Advanced Level students from different schools. 7 mobile units and 5 laptops to selected students from D.S.Senanayake College and Gothami Balika Vidyalaya were donated under phase 2 to improve the quality of education. Under phase 3, 32 mobile phones were given to students all around the country.

Moreover, a webinar ‘Win Your Future’ was conducted for the beneficiaries to motivate them to continue their academic careers. Which eventually will shape their lives for the betterment.

Animals that were raised to be killed and to live with the fear of being killed every single day is torture for them. To rescue them from human activities only another human can help. Hence the project Freedom Fight initiated by Rotaract Club of Uva Wellassa University of Badulla, aimed to say NO to animal cruelty while rescuing, treating, and sheltering injured animals. Initially, they managed to rescue 13 Cattles, 22 Rabbits, 2 Goats, and 16 Birds from cages and ruthless slaughter during the festive season of Christmas. Raising awareness about the welfare needs of farm and pet animals to ensure safety, love, care, and protection was done throughout the project. And also detailed information and knowledge gained from resources like Wikipedia articles, about rehoming, animal rescue history, animal health and welfare activities were translated and shared to provide guidance for better care of animals. 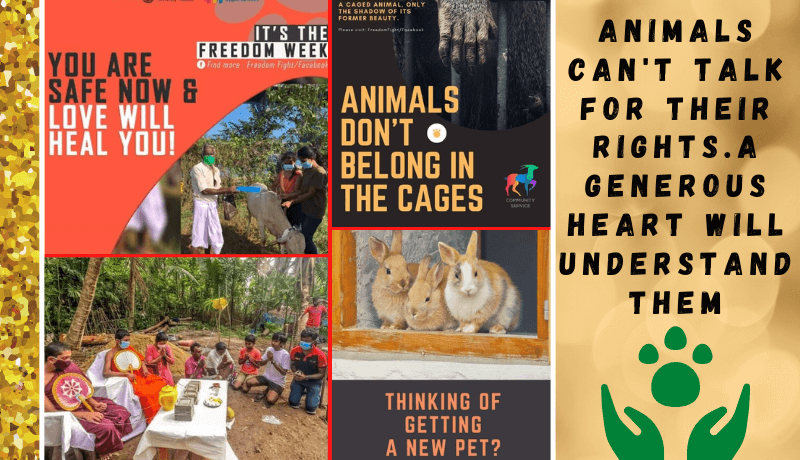 Do animals have doctors? No right? Of course to treat these innocent souls human intervention is much needed. Laying the foundation for ‘’Freedom Shelter’’, the very first local First-Aid center which was build partnering up with the Department of Wildlife Conservation was a worthy cause where they rescued and treated endangered innocent animals like black monkeys.

Despite the challenges of Covid 19 Rotaract club of Colombo Mid Town together with FMF, Achievers, ACBT and Rotary club of Colombo Mid Town, the proud owners of precious award-winning project Blind walk, took relevant steps to hold the event virtually. BLIND WALK LIVE TALK SHOW was a magnificent stage that got blessed with PHF Rtn.PP Hussein Fazleabas, the chairman of the Rotary Foundation, a past president of the Rotary Club of Colombo Mid Town, and PHF Rtn.Mayur Varia, Founder, and Director of Project Vision Fr.Dr.George Kannanthanam and DRR PP Kasun Sigera. With the new theme HOPE IN SIGHT, the interview raised awareness about blindness and preventable blindness and how precautions will prevent curable blindness. 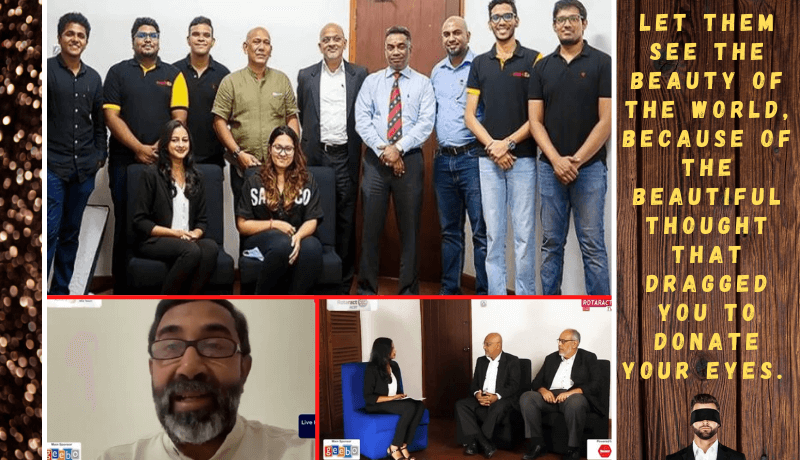 It was highlighted that we, as human beings can make it a point to pledge to donate our eyes when the time is right. Since the eyes that we close will make someone’s life brighter and colourful.

During the talk show over Rs. 200,000 donations were raised to light up people’s lives. Dry rations for 40 deserving families, 50 white canes for the visually impaired and employment incentives for 5 families were distributed through Sri Lanka Welfare Society of Blind Women proving that every penny received, reached a needy hand.

Click here to find out more about this award winning initiative

What if generosity spreads like the plague? That’s what exactly happened in the project Care Center that was collaboratively initiated by the Rotaract Club of Colombo Central, the Rotary Club of Colombo Central, the Interact Clubs of St. Joseph’s College Colombo, and St. Thomas’ Preparatory School which provided essential equipment to hospitals in Sri Lanka that were struggling to overcome the health battle. 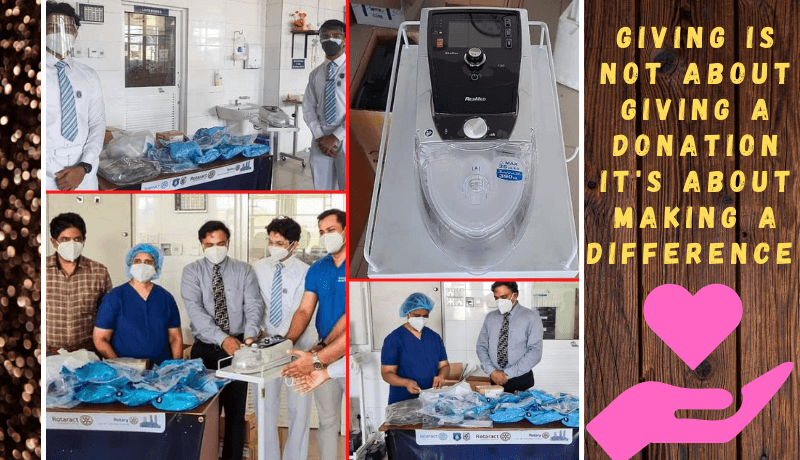 An effective fundraising campaign was conducted to raise finance for which many donors contributed to be a part of this endeavour. All because of the generous donors the project was successfully concluded by donating a high flow nasal oxygen machine worth 1.3 million LKR to the Ragama teaching hospital.

Outro from the above projects it is much evident that 'alone we can do so little, but together we can do so much'. They have gone the extra mile to serve the community when the community is in dire need of a helping hand during this turbulent time. It is true that winning an award is over the top, but indeed the change that they created in society and the lives that they brightened by these worthy causes are incomparable.

Thank you to all fellow clubs and fellow Rotaractors for providing us with the details. Stay tuned for the twelfth article of this novel series.