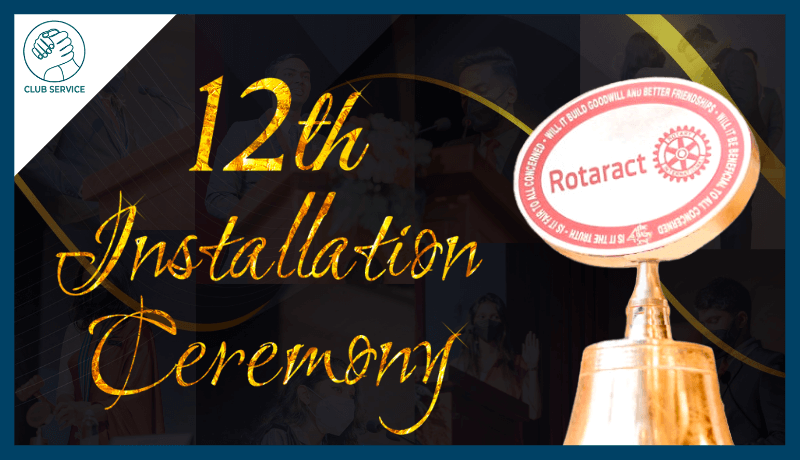 21 Dec 12TH INSTALLATION CEREMONY OF THE ROTARACT CLUB OF UNIVERSITY OF COLOMBO, FACULTY OF MANAGEMENT AND FINANCE (RACUOCFMF)

The celebratory 12th Annual Installation Ceremony of the Rotaract Club of University of Colombo, Faculty of Management and Finance was held on the 24th of November, 2021 at the Disaster Management Auditorium from 6.00 p.m. onwards, stepping into another gleeful year of hoping nothing but the triumphant throughout the journey as a club. The beautiful ladies clothed in elegant sarees brightened up the entire ceremony where the gentlemen were not seconded suited up in style.

The proceedings of the evening officially commenced by the man himself Rtr. Afkar along with his enthusiastic Co-host Rtr. Thinali inviting the dignitaries for the lighting of the oil lamp to keep up with the tradition and bring serenity and significance to the event. After the dignitaries were ushered to the head table, the house was called to order by the Sergeant-at-Arms, Rtr. Sanjana Wanigasekare and was then followed by the national anthem and the Conventional Rotaract formalities; the Flag Salutation, Rotaract Invocation, Four-Way Test, and the Rotaract Song.

Then, following the secretary’s report, the club video was played for the audience. The projects carried out by each avenue of the club during the past year and the achievements of the club were beautifully and concisely highlighted in the video. It was clear that the club had gone the extra mile to complete the projects successfully, even in a virtual context. 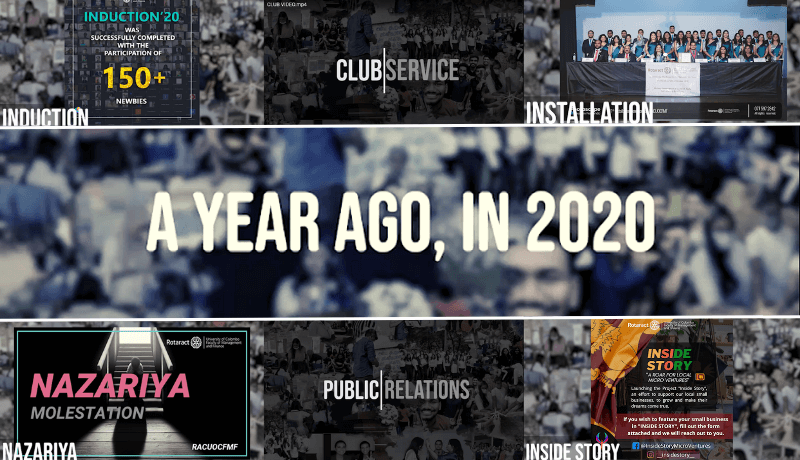 Thereupon, the president for the year 2020-21, Rtn. Rtr. Aamina Ismail (fondly known as' Haamina '), addressed the gathering. The speech which she delivered at the gathering was fun-filled and inspirational. She spoke beautifully about the journey she had traversed in the club. All hearts were filled with a mix of emotions, and she brought the audience to a world filled with sweet and sour moments of smiles and tears. She expressed her heartfelt thanks to each and every individual who worked and supported her with the uttermost dedication and commitment alongside her during her presidency. She thanked the outgoing secretary and said ‘I’ll be there for you, and you’ll be there for me. Always! (Bole chudiyan.. Bole Kangana... was playing in the background). The crowd was so happy and blessed to see the eternal friendship of these two big hearts. The Outgoing President then awarded certificates of appreciation to the Outgoing Board of Directors and the individuals who contributed diligently to ensure the club's success. She was tremendously happy and satisfied that the RACUOCFMF is finally in good hands and congratulated Rtr. Arshad Sufi Ismail and his outstanding Board of Directors. 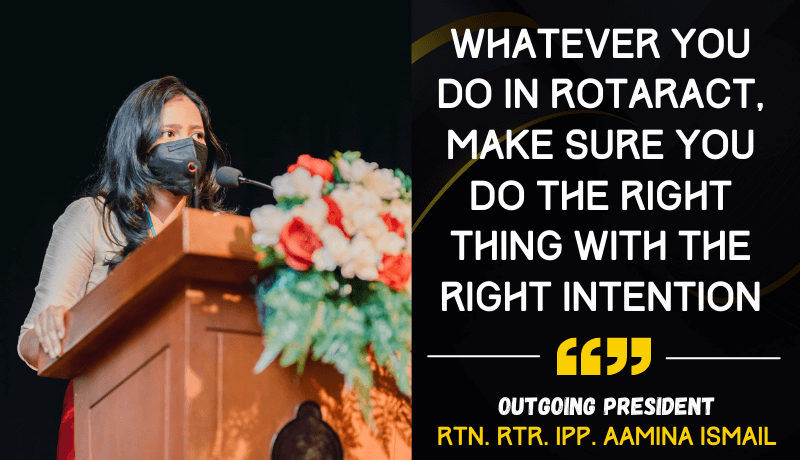 The incoming President, affectionately known as the "ladies’ man," Rtr. Arshad was then introduced by the president of the Rotaract club of the Royal Institute of Colombo, Rtr. Himaza Hilmy. She delivered an amusing speech in which she revealed the mastermind, who is 200% dedicated and passionate towards anything and everything he does. She described this multitalented man as a factory of words and thoughts (you could just run up to him if you ever run out of words, because he will surely have something to say, but remember, once he starts, you can’t stop) and also talked about how friendly and sweet-souled he is. Her speech proved that there was no one better suited to run the club than our new president.

Next, the most anticipated moment of the evening has arrived. To bid farewell to one era and welcome another, outgoing president Aamina and incoming president Arshad were invited to the stage. President for the year 2021-22, Rtr. Arshad Sufi Ismail was collared by the outgoing President, Rtn. Rtr. PP. Aamina Ismail, and responsibilities were also formally handed over (Let’s shout out and give a big round of applause for our 12th president of RACUOCFMF-cheers!). 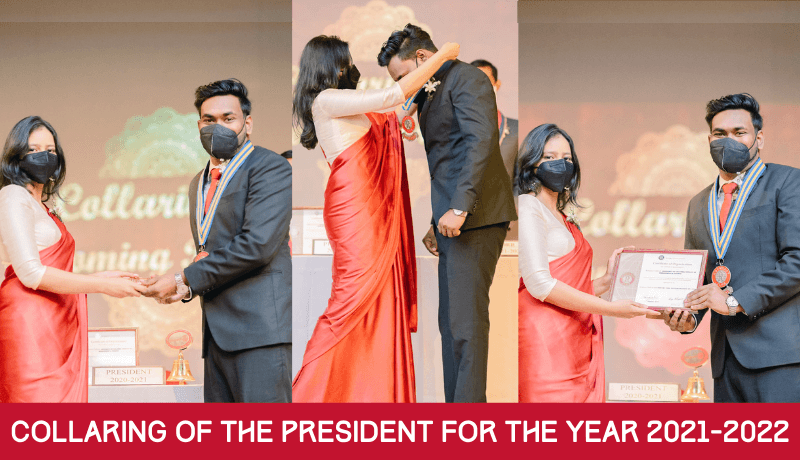 Then, the newly appointed president, Rtr. Arshad addressed the audience for the first time. He described how the journey began and the path he traversed. He said that he was an interactor during his school days and was really interested in joining Rotaract when he entered UOC as an undergraduate. He was happy to look back on the journey that he had travelled across in the last three years, starting as a general member, then editor, and finally, now as captain of the ship. He has shared a lot of experiences that he gathered in Rotaract and how those experiences were impactful in his life.

Could you believe that even the club president wasn’t granted his wish at his very own installation? Indeed, Rtr. Arshad was very unlucky since he was restricted for five minutes by his beloved secretary. That’s because according to her words “මෙයා කියවන්න පටන් ගත්තොත් ඉවර වෙන්නෙ නැහැ මල්ලි, Arshad ඔයාට අපි විනාඩි 5ක් දෙන්නම් ඕක කරන්න.” It’s a known fact among FMFers, that this duo bicker and act childish occasionally.

He emphasized that the reason why he joined Rotaract was fellowship because this movement is all about people within and outside the society at large. He also mentioned, although there’s an astounding number of 392 club members, this year’s primary goal being fellowship, delivering impressive initiatives and creating closer bonds isn't impossible with the right people, Exco and BOD always backing him up. Concluding the speech, he didn’t forget to mention that he eagerly anticipates his remaining five minutes of the speech next year. 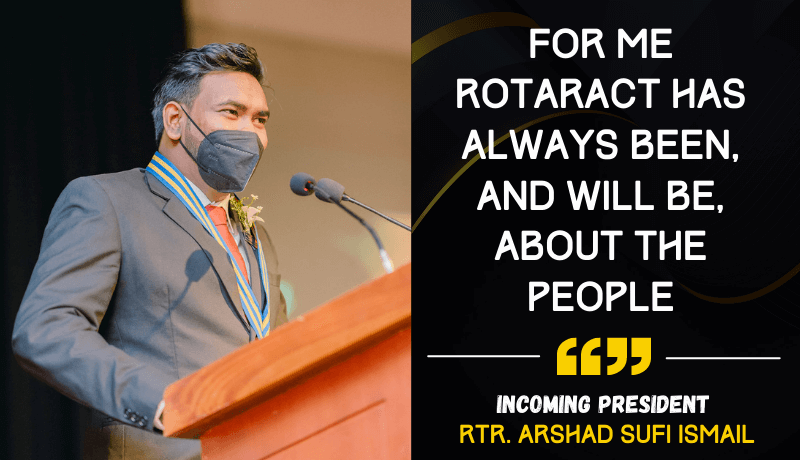 Rtr. Arshad then moved on to introduce his phenomenal Executive Committee and Board of Directors for the year 2021-2022 with the most appropriate catchy descriptions he came up with, which added a relaxed atmosphere to the event aside from formalities. 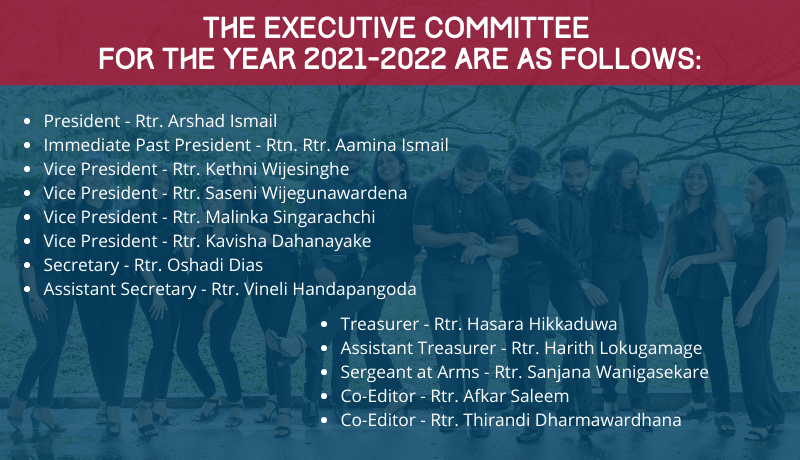 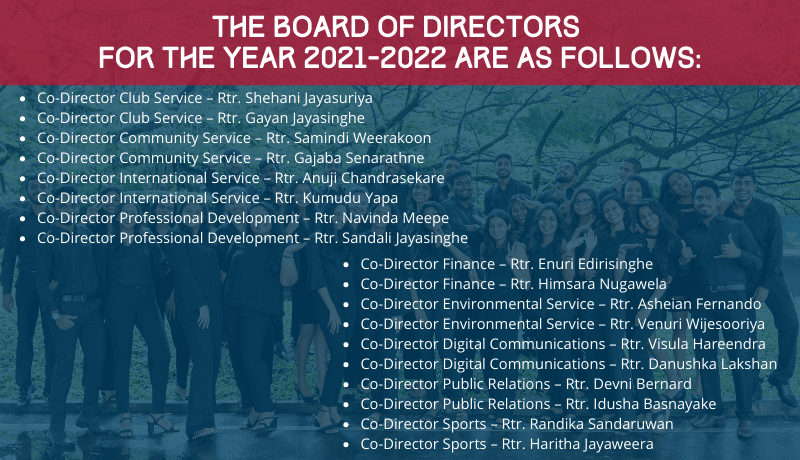 After that the Blog Team and the Digital Communication Team for the year 2021-22 was introduced to the audience.

Next on the agenda was District Rotaract Representative, Rtn. Rtr. PP. Akhila Wijethunga’s address to the gathering where he expressed his joy to speak to a physical audience after many virtual gatherings. His enthusiasm was further confirmed by his action of removing the mask and starting the speech with a smile. He conveyed his heartiest congratulations to the outgoing president Rtn. Rtr. Aamina and her exceptional committee while greeting the upcoming president Rtr. Arshad and his phenomenal committee. We, FMFers were honoured when he brought up the fact that our club holds an immense number of Rotaractors, and jovially stated to round off the count by enrolling eight more members to make it 400.

How do you think Akhila’s first impression of Rotaract being a place to mould up soft skills was altered? Well, it was a car wash project. That initiative was not merely focused on washing cars, but the hidden intention was to raise funds to change the lives of those who suffer from down-syndrome. Winding up his speech, he expressed his best wishes for the seven months ahead, since almost half of the Rotaract year has been successfully completed. 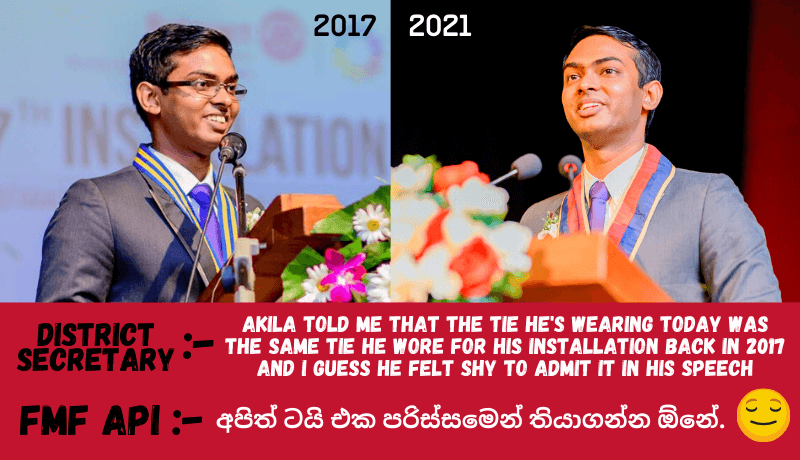 Long formalities came to a halt, and the stage was opened for an exhilarating performance by our very own bunch of young vocalists, Rtr. Shaheni, alongside Rtr. Saseni, Rtr. Gayan, Rtr. Asheian, Rtr. Visula, and Rtr. Vageesha joined hands, singing a mashup which was indeed an extravaganza entertainment to be noted and also, they got all the audience murmuring along with their consonant tune. 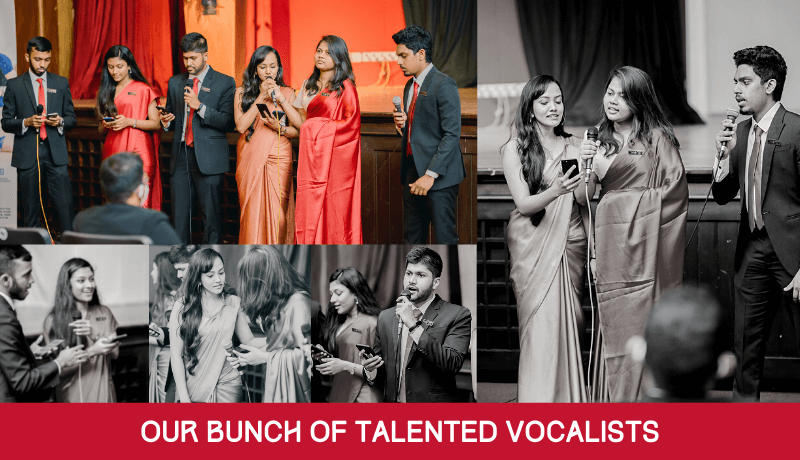 Hold on! All lights were switched off. Was it a power cut?

Nope. It was also a part of the plan of our boss lady Rtr. Oshadi. A secret birthday surprise to the Club's rising Tik Tok star, our very own President Rtr. Arshad and he was clueless about what was going on. A surprise birthday cake was brought to Mr. President, and the audience wished him a happy birthday. 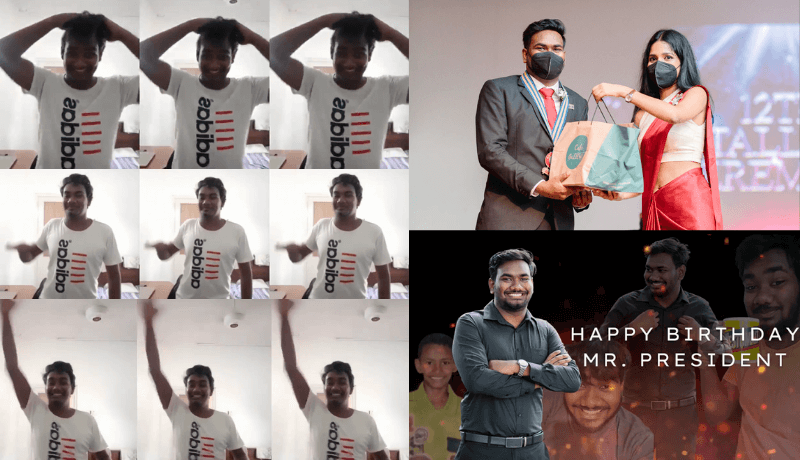 End of the epic musical performance and the birthday surprise, the ceremony was back to the agenda where District Rotaract Chair Rtn. PP. Paul Harris Fellow Marshad Bary was invited to address the gathering. Starting off, he congratulated the outgoing board for the service they commended and stated a few words about the newly appointed President Rtr. Arshad Ismail, the extraordinary journey he came through all the way from being a Non-Rotaractor to the President. Concluding his speech, he wished the talented personality, Rtr. Arshad Ismail and his Board of Directors a year filled with success.

After that, tokens of appreciation were presented by Rtn. Rtr. IPP. Aamina Ismail and President Rtr. Arshad and appreciated the dignitaries who were presented for the evening. Following that, tokens of appreciation were presented by Rtr. Arshad and Rtr. Oshadi to the bole chudiya couple; outstanding role models for bringing a character to the Club and guiding and leading for the entire year. Afterwards, the podium was undertaken by fellow Rotaractors of other clubs to felicitate. After all the cordial wishes, the newly appointed Secretary Rtr. Oshadi Dias voiced the gathering in delivering the Vote of Thanks on a final note. Then, the President adjourned the event, and the ceremonial proceedings came to a closure with the 'Dawn of a New Era' while opening doors for fellowship and refreshments.

In order to support the Going Green Concept, souvenirs were not printed, and e-souvenirs were sent to all attendees through emails during the event. Sink in here to have a glimpse of this masterpiece.

A biiiig shout out to the talented gentleman behind the camera. Thank you for the beautiful captures;') 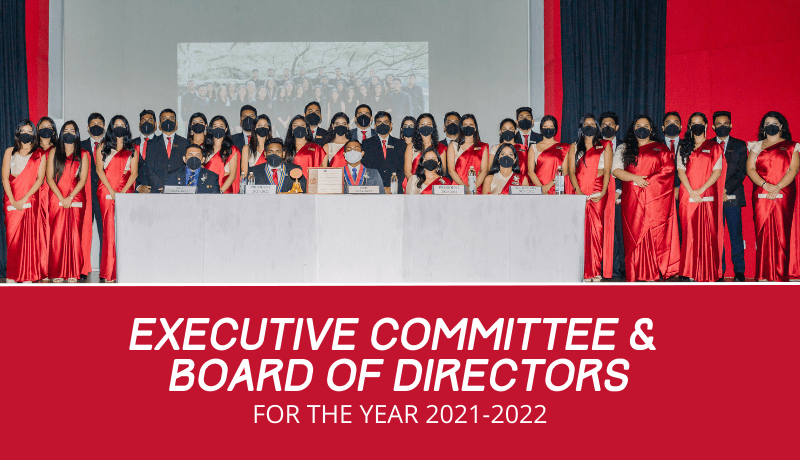 As members of RACUOCFMF, we would like to wish our vivacious President Rtr. Arshad Ismail and his Board of Directors, for a fantastic year, and we pledge to keep the Club's name soaring high at all times.