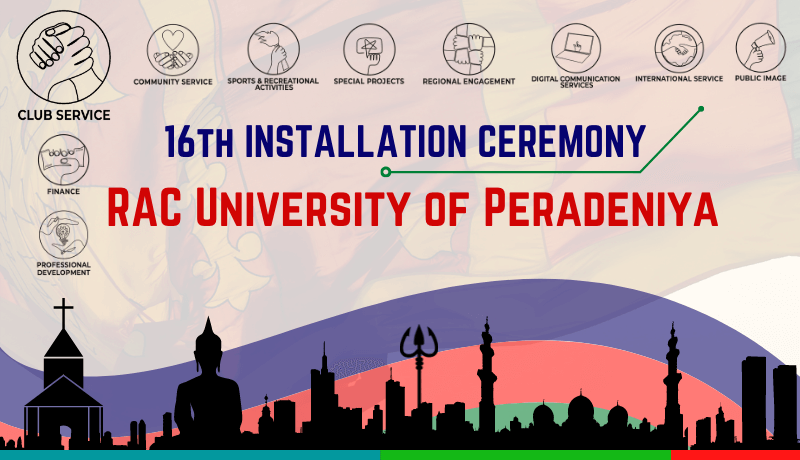 Posted at 14:21h in Installations, Others, Uncategorized by rcuocfmfadmin 0 Comments

The Rotaract Club of University of Peradeniya began a new chapter for an amazing year on the 12th of November 2021 with their 16th Installation Ceremony, which was held through Facebook live.

The ceremony proceedings were officially commenced after the house was called for order by President Rtr. Ravindu Seneviratne, all rose for the national anthem, following the Rotaract formalities of Rotaract invocation, four-way test and Rotaract song.

Subsequently, the gathering was cordially welcomed by Rtr. Methmi Kulatunge, the Project co-chairperson. She extended her pleasure to cheerfully welcome the gathering to witness the 16th installation ceremony of University of Peradeniya.

Proceeding that, the outgoing secretary Rtr. Tharana Wasalaarachchi presented the secretary's report for the year 2020-21. It depicted the primary objective for 2020-21, which was to broaden the outlook of the Club, improve the capabilities of the club members, increasing their abilities for them to fulfil the responsibilities to the society as the youth of Sri Lanka. With this in their mind, they have launched a large number of projects encompassing numerous avenue club services. Even though the year 2020-21 was a challenging year, RACUOP is proud to announce that they have successfully completed 41 projects covering all the major avenues of the services.

Afterwards, the Outgoing President Rtr. Ravindu Seneviratne addressed the gathering for one last time. He explained how they have got through the obstacles with his best team of people who can make everything possible. The 15th president of the Rotaract Club of University of Peradeniya concluded his speech with the message, "Rotaract is a place where you can really be yourself. So have no regrets and be the exception." 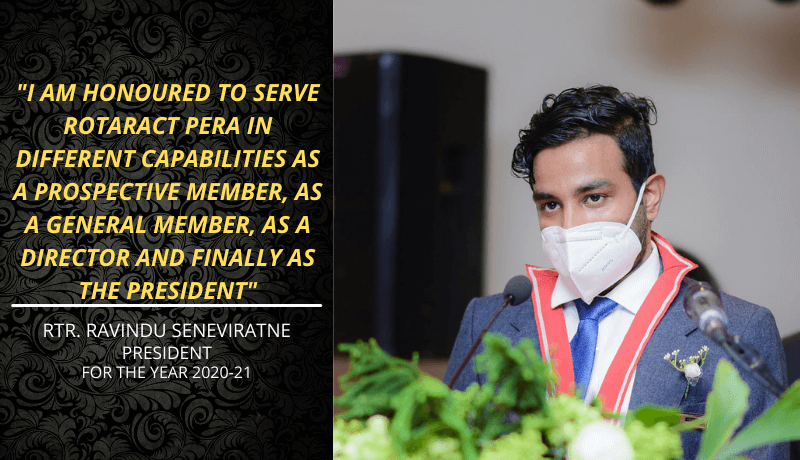 Up next was the most expected and the highlighted moment of the event, which was the introduction of the President for the year 2021-22, Rtr. Deelaka Pathiranage.

According to the introduction, Rtr. Deelaka is very straightforward when making important decisions and working with other people. However, he also ensures that he does not hurt anyone's feelings. He was appreciated for his ability to balance academics and extracurricular activities, taking him as solid proof that Rotaract will not affect students' academics. Introducer made the following announcement to all the single ladies over there "Girls, if you are looking for someone who is funny, smart, handsome and caring." 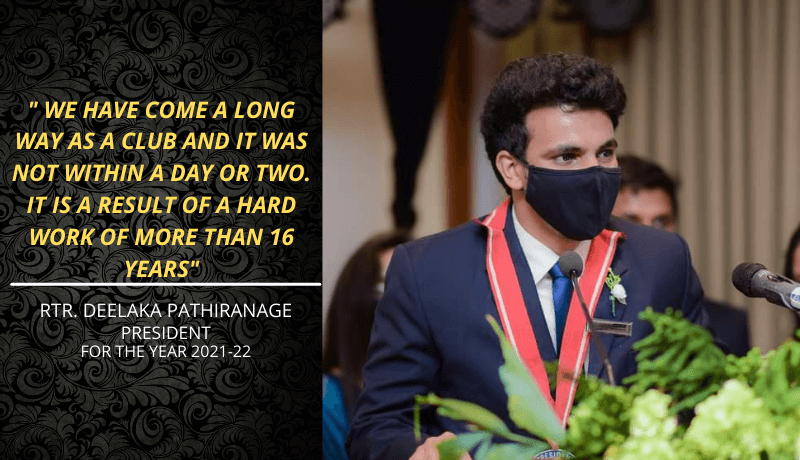 With that introduction, Rtr. Deelaka Pathiranage was gracefully collared as the President for the year 2021-22 by the outgoing President Rtr. Ravindu Seneviratne.

Thereupon the Incoming President Rtr. Deelaka Pathiranage delivered his speech stating his requirement of guiding the Club to be an exception among all others, as their previous officials did.

The 16th president of the Rotaract Club of University of Peradeniya gladly introduced his strength of the Club, the Board members for the year of 2021-22.

The Executive committee and Board of Directors are as follows: 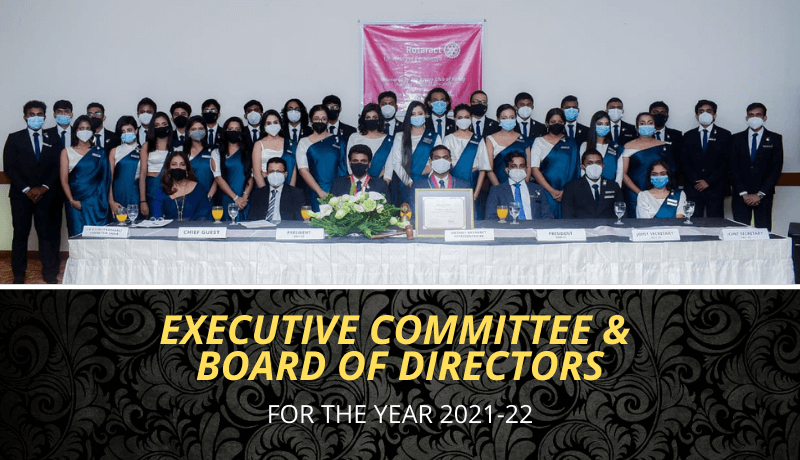 As per the next event on the agenda, the District Rotaract Representative Rtr. Akila Wijetunge addressed the gathering. He explained the importance of planning, goals and objectives with the right purpose and right idea in mind. Rtr. Akila Wijetunge motivated the members with the following message. "Despite the challenges we have, the ongoing pandemic, we are a group of individuals who adapt, change ourselves and change the rest of the world around us, especially for good." 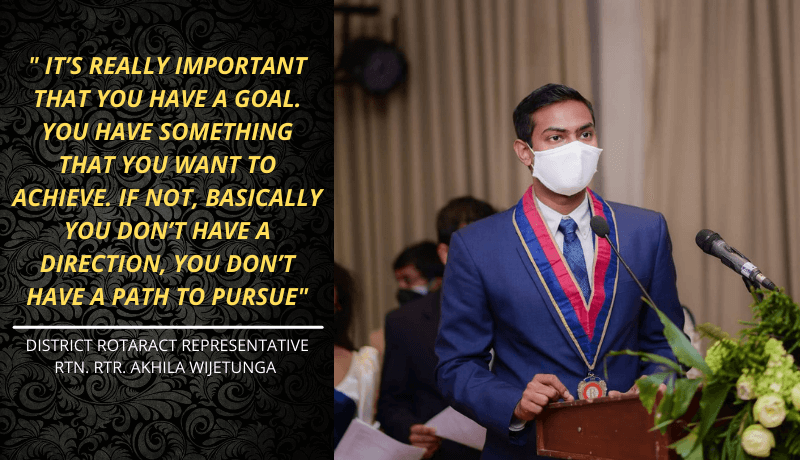 Then the Chief Guest for the day Prof. Terrence Madhujith, Deputy Vice-Chancellor of the University of Peradeniya, addressed the gathering.

Finally, the ceremonial proceedings came to a closure with the vote of thanks being delivered by the Incoming Secretary Rtr. Ayesha Udawaththa. 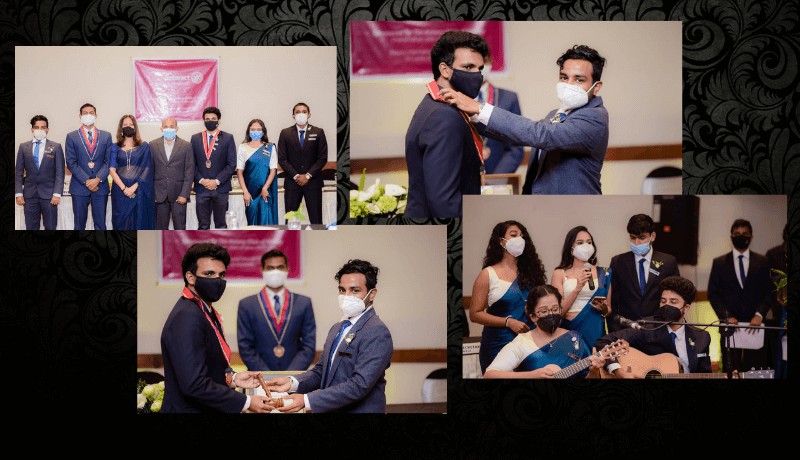 The Rotaract Club of University of Colombo, Faculty of Management and Finance (RACUOCFMF) would like to extend its warm wishes to Rtr. Deelaka Pathiranage and his Board for their upcoming journey they just embarked upon! 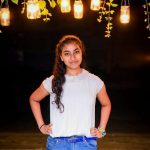