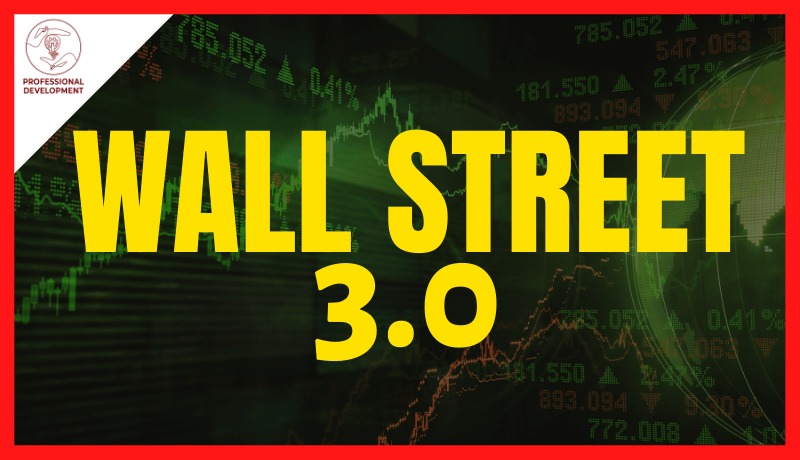 Wallstreet 3.0 was an initiative of RACUOCFMF under the professional Development Avenue that was organised to unveil the perceived mysteries surrounding cryptocurrency and to clarify the basics of the stock market and its operation. It was streamed via zoom on the 19th of Nov from 6 pm. The main speakers of the session were Mr. Dunith De Silva, founder, and CEO of Eden solutions, who elucidated on cryptocurrency and its background, and Mr. Vinod Payagala, Managing director of PNJ consultants Pvt Ltd, who elaborated on the stock market and its functions.

The moderator for the day, Rtr. Chovini began the session with her brief introduction to the topic at hand. She welcomed the speakers and handed over the virtual stage to Mr. Dunith. 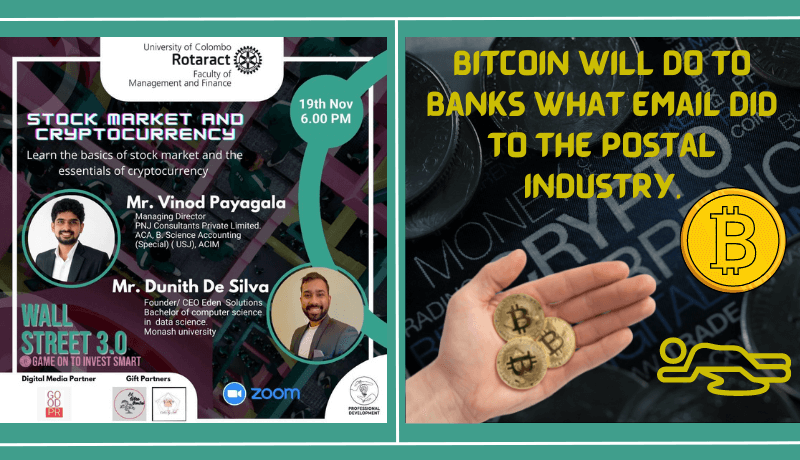 Mr. Dunith started off by drawing out the basic idea of cryptocurrency and blockchain in layman terms. He introduced cryptocurrency as a digital form of payment that is exchanged online for goods and services and briefed us on the digital ledger system, blockchain. He further drew attention to the impressive security of blockchain technology and how it's virtually impossible to be tampered with. Next, some commonly used and well-known cryptocurrencies such as bitcoin, ethereum, and USDT were introduced to the audience. He stated how Bitcoin, being the very first digital currency to be used, is expanded by a process called bitcoin mining which is a process of solving mathematical puzzles to create bitcoins. Moving on he presented a brief explanation of his personal favourite, Ethereum. It's the second-largest cryptocurrency by market capitalisation which was primarily created, like all other cryptocurrencies in the space, to address issues that bitcoin couldn't solve. He also mentioned how it functions as a base blockchain for numerous tokens traded in the market. Talking about Tether (USDT) Mr. Dunith pointed out how it's sought out by investors who wish to avoid the extreme volatility of the crypto market. And we were informed of how USDT can be used to purchase other cryptocurrencies in situations where bank transfers and other forms of payment cannot be used to the cause. 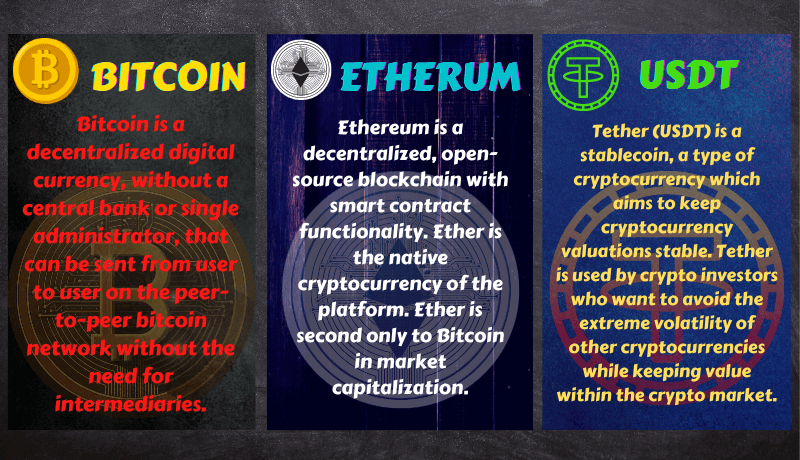 Moving on with the session Mr. Dunith instructed on the steps to get started on cryptocurrency. First, it is necessary to create an account on an exchange. He recommended Binance owing to its P2P feature. The second step is to complete the KYC identification. Next up the potential investors were advised to head to the P2P section and get USDT in exchange for rupees. The fourth step is to head to the market section in the exchange and use the USDT to buy cryptocurrency. Mr. Dunith expressed that proper technical analysis will enable one to automate the orders, buy and sell without having to keep track of the graphs continuously. His next instruction was to convert the profits in cryptocurrency form to rupees through the P2P page. He also advised us to not be led into believing that we won't be able to liquidate our USDTs at any time since buyers of crypto are quite common.

Afterwards, Mr.Dunith suggested the "Crypto Master Class" conducted by his company for anyone wanting to know more about cryptocurrency and how to invest in them. He then described the bear market as a declining one and the bull market as a rising market. The apt timing to begin investing was pointed out to be during a bull market period which usually begins with a bitcoin halving event. Towards the end of the first session, he summed up how cryptocurrency will fit into the future. As Mr.Dunith expressed, Many major institutions are already incorporating cryptocurrencies into their balance sheets and even the El Salvador government has recognised bitcoin as a tradable currency. Based on the current situation it will only be a matter of time until cryptocurrency is accommodated into all types of transactions and activities. Accordingly, the job opportunities in this particular field are only expected to grow and expand. All in all a prosperous future for cryptocurrency and blockchain technology is apparent. By clarifying numerous doubts of the viewers during the Q&A session, Mr. Dunith concluded the first part of wall street 3.0. 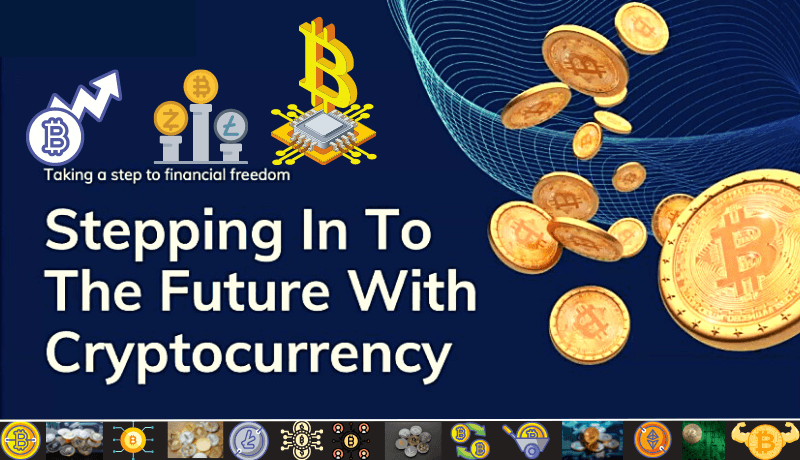 Next, Mr. Vinod took over the virtual stage to discuss the topic of the stock market and its operations. He began by outlining the basic concept of financial markets and it's two categories, capital market, and money market. While long-term securities were said to be exchanged through the capital market, short-term securities were depicted to be accommodated by the money market. Following that he gave an introduction to the Colombo Stock Exchange and its basic features. We got to know that the CSE which was established in 1896 is a limited by guarantee company that is regulated by SEC. Next, he listed the main securities traded in CSE and shortlisted ordinary shares, preference shares, and share warrants to be the most popular among them all.

Moving on, Mr. Vinod described the three ways of buying shares which were IPO, SPO, and buying at the counter via CDS. Accordingly, Initial Public Offering (IPO) is the issue of stocks of a company to the general public for the first time and a Seasoned Public Offering (SPO) is an issue of additional securities of an already listed company. Then Mr. Vinod emphasized the necessity to have a CDS account to access all the above-said ways of investment in the stock market and duly directed us on the ways to open a CDS account. According to Mr.Vinod, the manual way of opening a CDS account is concerned with submitting an application via the 15 member firms or the 11 trading firms of the CSE. This approach was said to give results in 2-3 working days. Following that, he guided us through the process of registering for a CDS account via the CSE app which proved to be relatively easy and convenient.

Next up we were briefed on the Price indexes in CSE which constituted ASPI, S & P SL 20, and 20 price indexes attributable to the 20 sectors within the CSE. ASPI presents the weighted average price movement of all companies concerned while S & P SL 20 depicts the price movement of the largest and most liquid companies. He then went on to list the main factors to consider before making the investment decision after clarifying that these are not the only deciding elements. Thus, the quantitative factors included Net asset value - book value of shares- and P/E ratio. And the qualitative factors consisted of company decisions and plans. Mr.Vinod expressed how analyzing the above-said factors would give the investors a basic idea to extrapolate the share prices for the foreseeable future and consequently assist in deciding which shares to buy and when to buy or sell them. 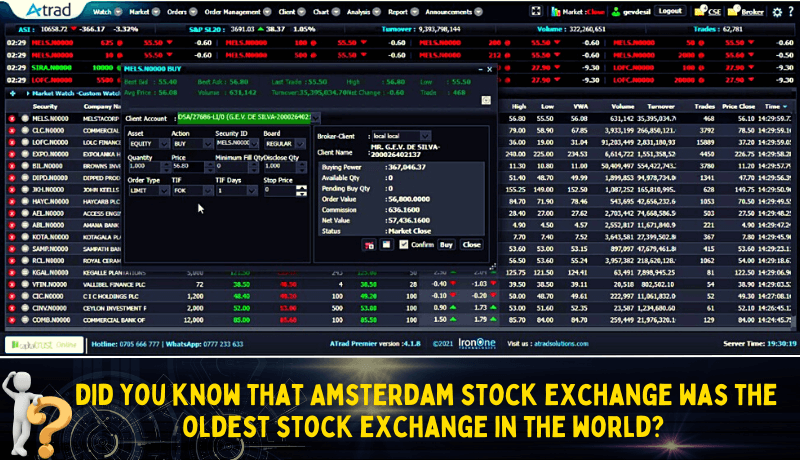 The viewers were also advised to look up the transaction cost prior to any investment decisions. Mr.Vinod mentioned the present transaction cost rates to be 1.12% for transactions up to 100mn and 0.6125% for transactions above 100mn and took us through a simple example to stress the critical nature of this particular element. He then comprehensively demonstrated how to use the stock exchange and trading platforms for investment activities. We were initially shown how to navigate through the CSE website and informed about the essential components to be aware of. Next, Mr. Vinod directed the audience on how to use a trading platform by guiding us through the site of Atrad which is one of the trading platforms of CSE. As a final remark, Mr. Vinod requested the potential investors to start small, keep on learning and keep at it with perseverance and not be discouraged because of underwhelming returns. Following that many enthusiastic viewers got detailed answers to their queries. Eventually, Rtr. Chovini's vote of thanks marked the end of the session.

The project and its theme inspired us to do a social media challenge. What was the challenge? To come up with innovative answers to the question "What would you do if you won the Squid Games prize money? Many individuals took part in this challenge, and we witnessed some innovative and funny ideas from the participants. After reviewing many ideas, we narrowed it down to just three innovative responses and announced them as the winners of this exciting competition. One of our sponsors, "Cakes by Ishi," provided three gift packs to the winners of the challenge. 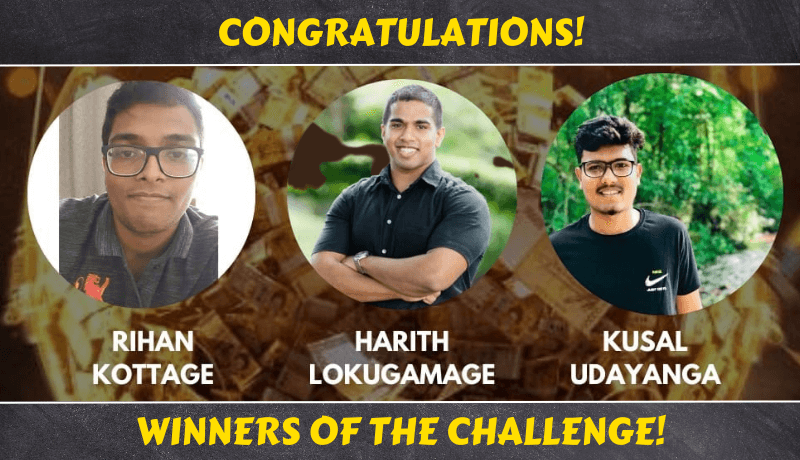 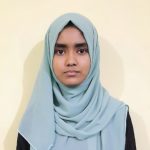 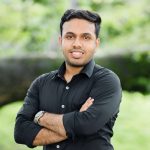