Posted at 00:17h in Featured, Uncategorized by rcuocfmfadmin 0 Comments

It was a fine day for most of the villagers. The sun was shining ever brightly, the smell of freshly cut grass of the fields drifted along with the slight breeze, and birds tweeted in random symphony. The only disruption to that calm afternoon was the girl’s scream. It was ear-shattering and heart-wrenching.

“Isn’t this Kaamini's girl?” , “who has let her out?”, “It’s embarrassing to watch, someone inform her house”, “Take the kids inside, she’ll give them a scare."

“As some of the villagers chattered on, and some flinched on the scene and hurried along, and some went for help, in the middle of the road an autistic girl of 20 kept on screaming, tears and snot running down her face, while she agitatedly tore her skirt.

The onlooker’s look grew more sympathetic when Kaamini, Sindhu’s mother arrived at the scene. The mother hurried to the child with unspilled tears on her eyes, her chest heaving. Being alone, she did not have the luxury to cry out her heart and let someone else deal with the happenings. Kaamini bit down her lips to keep them from trembling and crying out aloud. She felt her throat closing in as she took in her only child sitting in the middle of a dirty road in a puddle of urine, wailing and her skirt hanging in pieces. The pain Kaamini felt was overwhelming, it was almost as if she could physically feel it. She clamped down her trembling hands and shook Sindhu by her shoulder and stopped her incessant wailing. Attempting to cover her daughter with the end of her saree pallu, she hobbled along to her brother’s house hugging Sindhu by her side.

Ever since her husband left her after knowing that she couldn’t bear children anymore, she has been under the care of her younger brother at her maternal house. Grateful as she was for her brother and sister-in-law, she very well knew the situation would have been different, given her father not being alive.

“Kadavule!! What misfortune has she brought on us now!” cried sister-in-law Bagavathi as the mother-daughter duo appeared in the household. She went on exclaiming and cursing their fate while Kaamini took Sindhu to her room to clean her up. The poor girl sat there with a vacant look in her eyes without even having realised that she soiled her clothes in her fit. The look in her eyes turned into fear when she heard the booming voice of sithappa.

“ Is everyone in our house blind? What were you all doing when that freak went out?” 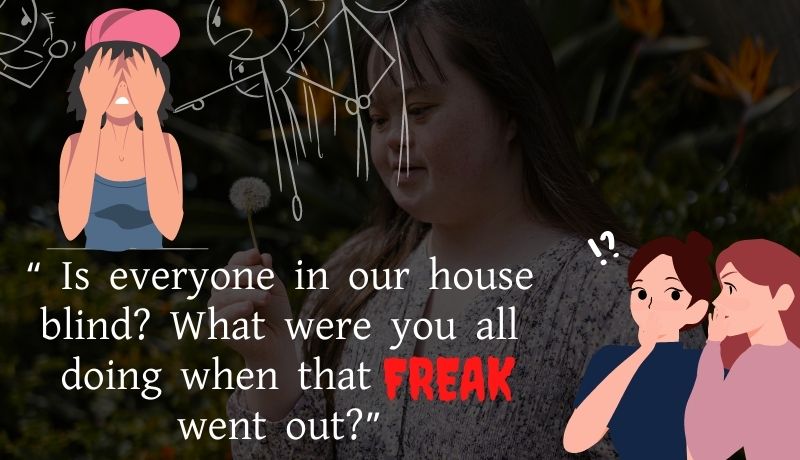 Sindhu never liked Hari, Kaamini's brother. He always said that he would break her bones if she went outside or ‘troubled’ the kids going to school. She was too afraid to say that she didn’t trouble the kids. Sindhu liked to see the kids go to school every morning through the window in her room. She thought they looked very nice in white dresses and colourful bags on their back. She only smiled and waved at them and tried to be friends with them. She didn’t trouble them, she didn’t trouble anyone. Sindhu wasn’t like those people who hurt limping dogs and abandoned kittens for fun.

“Brother, this won’t happen again. She hardly behaves like this, someone should have done something. There are bruises in her arms and forehead.” Said Kaamini in a pleading voice, twisting her saree between her hands.

Hari shot back,“No akka. This is not done. Don’t try to blame someone else. Putting up an act in the middle of the road and ruining our reputation is not the only thing she has done. Did you know she had hurt Vasu’s kid too?” 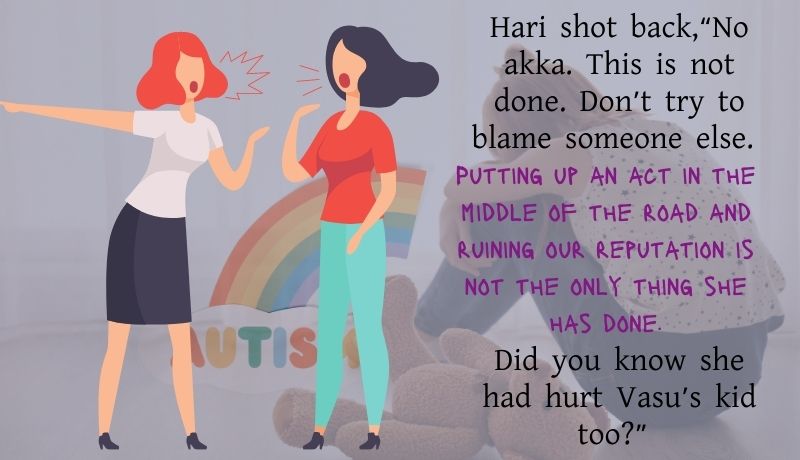 “Yes! He had a cut on his forehead. He was saying to the other boys that Sindhu Akka threw a big rock at him when he was passing by.” Piped in Muthu, Hari’s 10- year-old son.

Sindhu liked Muthu. He used to play with her in her room and brought candies for her when he went to the corner shop. Sindhu did not understand some things that happened lately though. Muthu stopped playing with her. When she called him again and again he told that it’s because “Sindhu Akka, you’re a girl and you’re sick”. Sindhu burst out laughing at that. She said “ I’m not sick Muthu. See, I don’t have a cough and I don’t always sleep like the neighbour aunty, I’m not sick.” This did not convince Muthu unfortunately.

Hearing Muthu’s accusations now neither Kaamini nor Sindhu could provide anything for defense. The mother was ignorant to the happenings of that afternoon and the poor daughter simply did not have the ability.

“What are you chuckling and muttering about retard? Did I not tell you to be inside and never go outside. You know what I said, I’ll do if you ever go, don’t you?”

Sindhu crawled towards the wall whimpering. Kaamini stood before Sindhu and pleaded “she is like a child, brother. You know she is not like us. Please, this won’t happen again.” Kaamini’s tears came undone while her trembling hands held cupped in front of her.

“Well exactly! She is not like us, she is a lunatic! She is crazy and that’s why she should stay in her bloody room and stop being a bigger burden” Hari went on and Bagavathi followed on with her remarks. Such were the happenings in the Hari Villa during the late hours of the evening. And unknown to them all the actual series of events that resulted in the present atmosphere were disappointing indeed.

Like all other days, Sindhu got dressed, asked her mother to tie her hair with the pink ribbon, patted a handful of talcum powder on her face, and went to sit by her window. She eagerly peered through the curtain as waves of kids passed by her house. Looking at them made Sindhu so happy. When she waved her arms in excitement the glass bangles in her hands chimed a tune of innocence and glee. In a few minutes, the crowd of students with salted mango, seeni bola, and bulto in their hands ebbed away. Sindhu was looking at an army of ants in her windowsill when a group of taller boys ambled down from the school. Vasu, one of the boys, saw Sindhu and called out to her.

Sindhu was overjoyed. No one talked with her like that, especially not school kids. Her smile stretched from ear to ear and she hurried outside with unsteady steps. It felt weird walking outside since she hardly left home. White patches of talcum powder still clung to her face when she stood before the boys.

“What a clown” muttered a boy. Vasu looked at them with a glint in his eyes and slant in his lips and then turned his attention to the smiling Sindhu.

“Now, you want to have some lovi, right?....ok then. Catch it” said Vasu and hurled a lovi towards her.

“oww...why don’t you catch it! That’s ok, we’ll practice with stones first. No need to waste all these lovi fruits.”

And then came the pelting of stones. Each boy, with no worries whatsoever, eagerly collected one stone after the other and hurled them towards the helpless girl, laughing all the way. 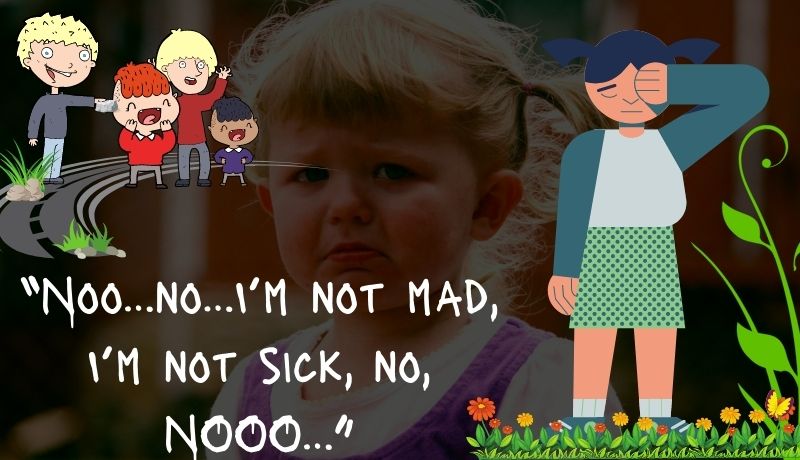 Vasu and his friends continued calling Sindhu all kinds of names and ran with her on their tails.

A shrieking Sindhu grabbed a stone with both her hands and hurled it in her frenzy towards the nearest boy. The stone struck Vasu’s forehead and took him by surprise.

“She is crazy Vasu. We should go, if not she’ll kill us. Come on” said one of the boys there. “You crazy bitch” muttered Vasu as he shoved Sindhu into the ground and ran away. And Sindhu, in her anger, frustration, and helplessness, clawed her skirt and kept on shouting.............

On the morning following the fateful day, the “freak” sat in a locked room, by the closed window, and the “innocent” and “pure” trudged outside on the streets, having “fun”. 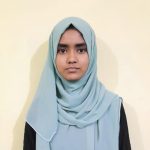