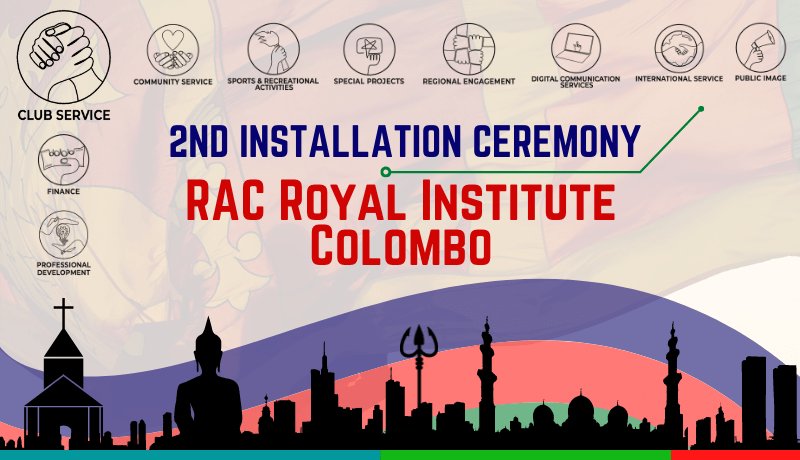 Posted at 00:54h in Installations, Others, Uncategorized by rcuocfmfadmin 0 Comments

The Rotaract Club of Royal Institute of Colombo (a club quite special to all of us at FMF) stepped into yet another phenomenal year with its 2nd Installation Ceremony which was held on the 07th of February 2022 at the DHPL Building from 6.30 p.m. onwards. Representing RACUOCFMF, Rtr. Arshad Ismail (ahmm ahmm!!), Rtr. Oshadi Dias, Rtr. Kethni Wijesinghe, Rtr. Saseni Wijegunawardane, Rtr. Afkar Saleem and Rtr. Eranga Dias attended the glorious ceremony to witness and relish the novel era of RACRIC.

The proceedings of the evening were officially commenced by Rtr. Shevaan Dayarathna and Co-host Rtr. Kavithi Dinethma inviting the dignitaries for the brightening of the traditional oil lamp including the Chief Guest, Past President of the Rotary Club of Colombo South Rtn. T S Arulanandan, District Rotaract Representative Rtn. Rtr. Akhila Wijethunga and District Rotaract Chair Rtn. PHF Marshad Barry. After the house was called to order by the acting Sergeant-at-Arms Rtr. Khazaan Nazeem, all rose for the national anthem which was followed by the Conventional Rotaract formalities: The Flag Salutation, Rotaract Invocation, Four-way test, and the Rotaract song which was conducted by Rtr. Nabeelah Marjan. 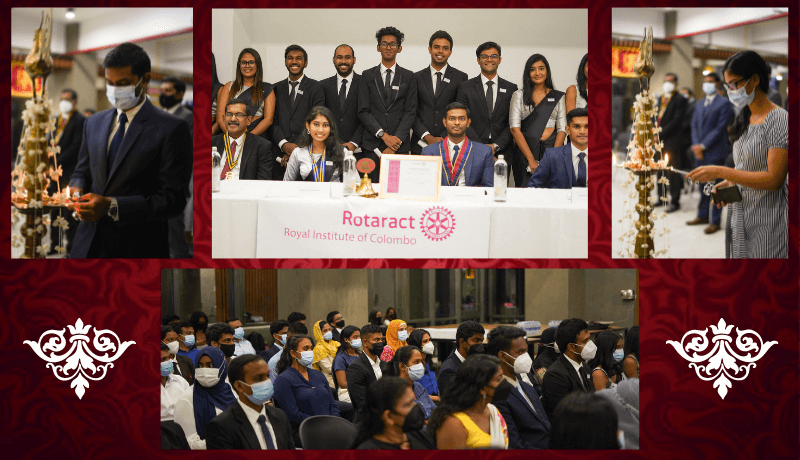 Next, The Co-Project Chairperson Rtr. Abdullah Shahnawaz welcomed the gathering. Thereupon, the Secretary’s Report highlighting the remarkable moments of the preceding year was presented by the Assistant Secretary for the year 2020-21 Rtr. Sachini Fernando. She did not forget to mention the awards that the club secured last year of which the Best Charter Club of the year 2020-21 caught attention among the viewers.

Then, the Outgoing President, Rtr. Akeel Sufi Ismail was invited to share a few words about his year of Presidency. He highlighted that amidst the challenges faced, the Club had successfully managed to carry out 16 eminent projects and also proudly revealed the Club’s magnificent achievement of receiving several awards at the 31st District assembly, in the year of its inception. 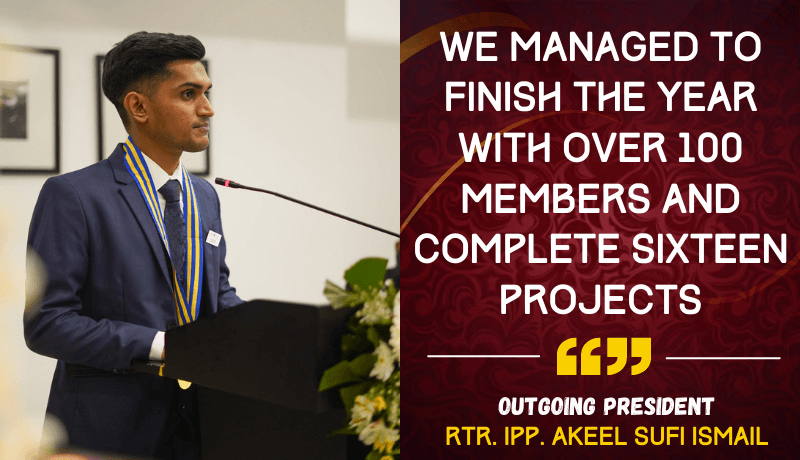 Moments before he signed off, he extended his gratitude to all those who contributed to the mission which turned out to be an exceptionally successful one.

Thereafter, President of the Rotaract Club of University of Colombo, Faculty of Management and Finance, Rtr. Arshad Sufi Ismail was invited to introduce the Incoming President. 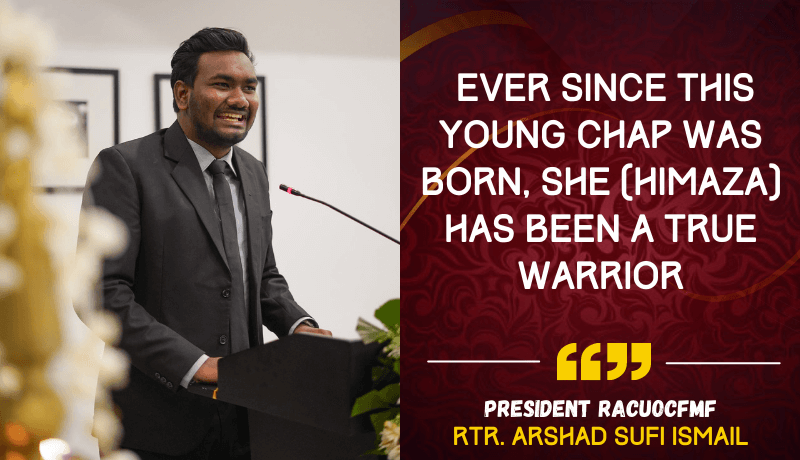 The introduction began with the line "Ever since this young chap was born, she has been a true warrior, don’t be amazed Himaza, you are a true warrior. In fact, she is worried about every single thing every single day" and ended with the note how proud Rtr. Arshad was of Rtr. Himaza, looking at how far she had come.

Afterwards, the most anticipated moment of the ceremony arrived as the Outgoing President Rtr. Akeel Sufi Ismail gracefully collared Rtr. Himaza Hilmy as the President for the Year 2021-22. 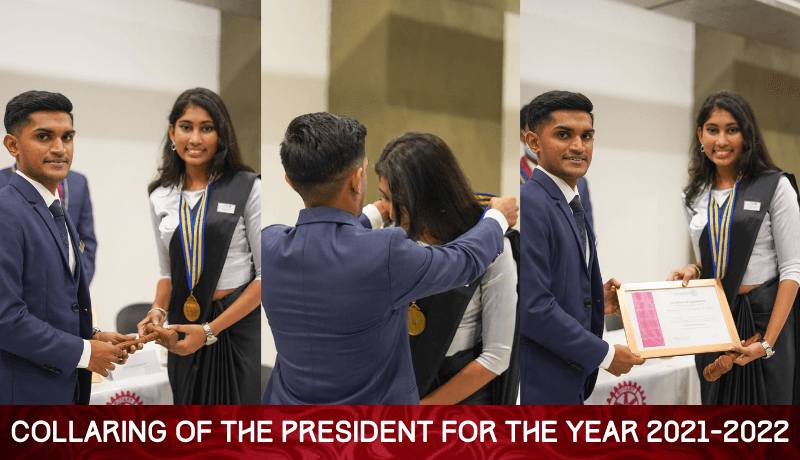 This was followed by the newly appointed President’s speech where she began saying “It still feels surreal to be standing here today. Because I thought this day would never come. If you know you know”. 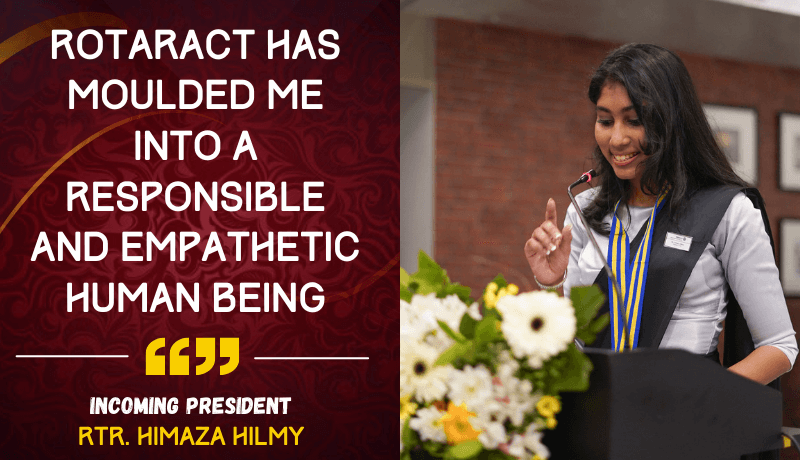 She further briefed her vision for the year and concluded her address by introducing her phenomenal Executive Committee and Board of Directors for the year 2021-2022 with the most appropriate catchy descriptions she came up with, which added a relaxed atmosphere to the event aside from formalities. 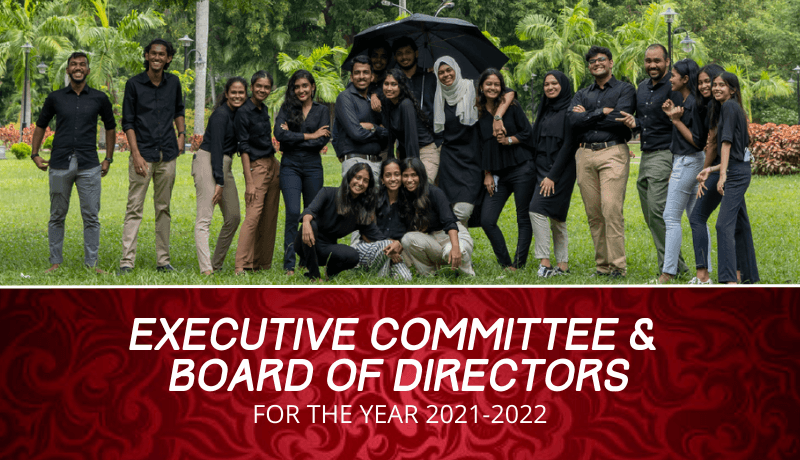 Next on the agenda was District Rotaract Representative, Rtn. Rtr. PP. Akhila Wijethunga’s address to the gathering. He started off with a sarcastic note on the Jaffna Fellowship Visit consequence by stating “After two to three weeks of break we are back in action”. 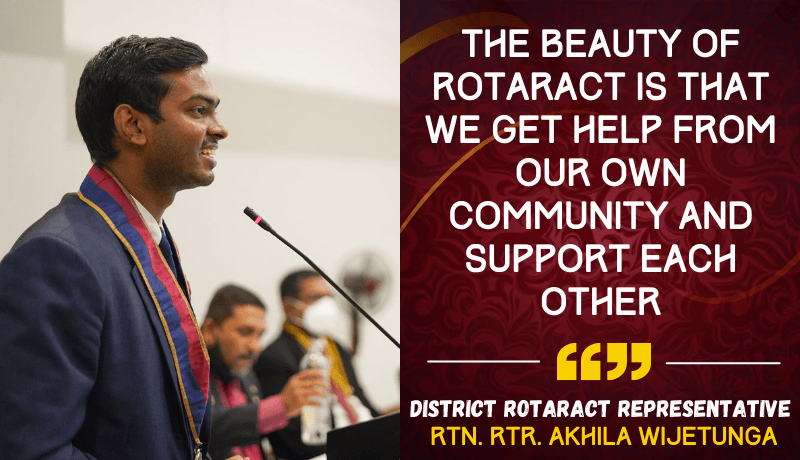 Winding up his speech, he expressed his best wishes for the remaining months ahead, since almost more than half of the Rotaract year has been successfully completed. Long formalities came to a halt, and the stage was opened for an exhilarating performance by Rtr. Shevaan Dayarathna was indeed a unique and extravaganza entertainment to be noted.

Then, the Chief Guest of the evening, Past President of the Rotary Club of Colombo South, Rtn. T S Arulanandan addressed the gathering and congratulated the Rotaract Club of RIC for their achievements and the great endeavors of an impressive charter year. ‘Be happy that you are a part of a great movement’, he added as the final line of his speech. Subsequently, the District Rotaract Chair, Rtn. PHF Marshad Barry shared several valuable thoughts with those present. He highlighted the vital role played by Rotary in establishing platforms that enable its members to successfully step into the corporate world.

Afterwards, a short video titled “A Trip Down the Memory Lane” was played which brought joy in the face of every Rotaractor in the hall. And then tokens of appreciation were given to all the dignitaries and following that, the stage was open for felicitations. With the Vote of Thanks delivered by the Secretary for the year 2021-22, Rtr. Imaad Ishar, the remarkable and delightful occasion was concluded for refreshments and continued fellowship. 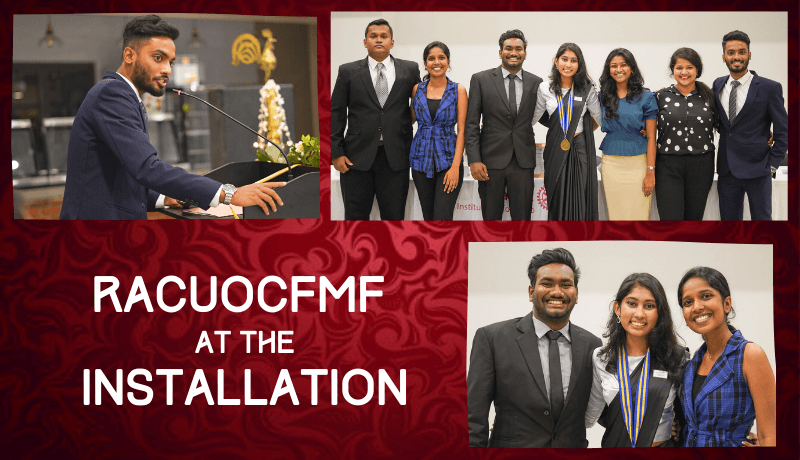 It was indeed a great delight for the Rotaract Club of University of Colombo, Faculty of Management and Finance to be part of this glorious ceremony, and would like to extend its heartiest wishes to Rtr. Himaza Hilmy and her Board of Directors for yet another terrific year ahead! 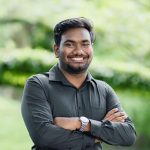