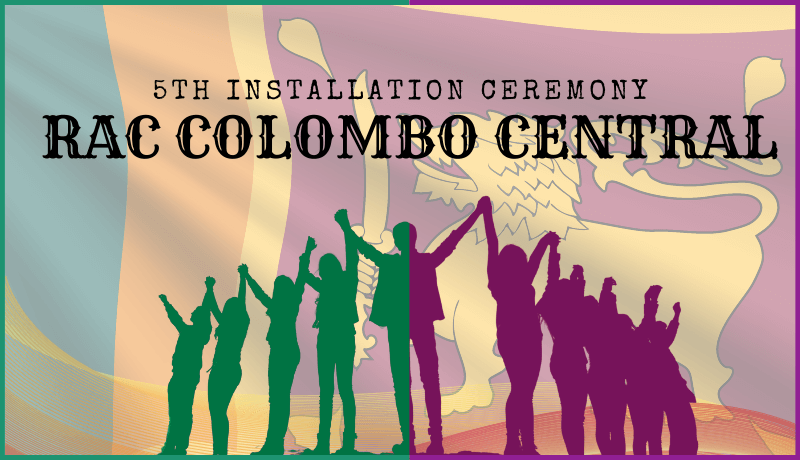 Posted at 18:45h in Installations, Others, Uncategorized by rcuocfmfadmin 0 Comments

Celebrating the 5th successive year, Rotaract Club of Colombo Central were honored to hold the 5h Installation Ceremony on 7th of August 2022 at Royal Union Skills Center, Colombo 07 from 10.00 am onwards.

After the arrival of chief guest, official proceedings of the ceremony commenced with the lighting of the traditional oil lamp. The dignitaries took their places at the head table and the house was called to order by the Sergeant at-arms Rtr. Chan Surendra. All rose for the national anthem and was taken up by the Routine Rotaract Formalities; The flag salutation, Rotaract invocation, four-way test and the Rotaract song. 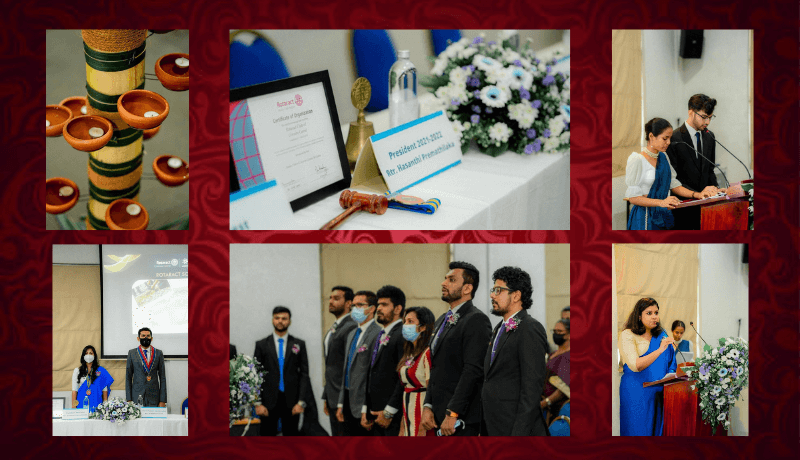 The Outgoing Secretary Rtr. Savindrie Jayawardana welcomed the gathering. She also delivered the Secretary’s Report for the Year 2021-22 highlighting the astounding moments and achievements regardless of the difficult going with the Covid 19 and economic crisis. The next was a recap video of the club to walk down the memory lane throughout the victorious year.

Then the Outgoing President, Rtr. Hasanthi Premathilaka who is known to be the first female President of Rotaract Club of Colombo Central was invited to share her experience about her year of Presidency. She highlighted the fact that the club could reach greater heights and was able to finish many projects across the avenues during the year as a club of excellence with the untiring effort and commitment of all the Rotaractors in the club. She extended her heartfelt gratitude to everyone who supported throughout the year to take the club into greater heights. She also did not forget to thank the Past Presidents for the confidence they showed in her and entrusting club responsibilities. 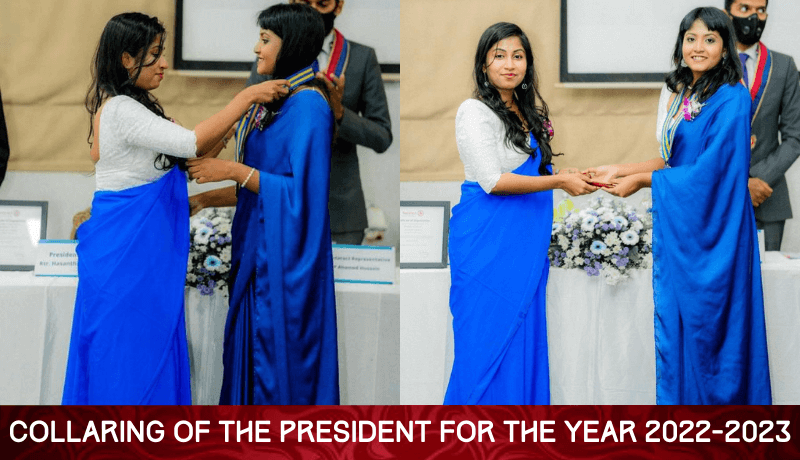 The Outgoing Secretary Rtr. Savindrie Jayawardana introduced the Incoming President Rtr. Prasadie Karunarathne who started her Rotaract journey back when she was at the Institute of Chemistry Ceylon and congratulated the Incoming President and her Board of Directors. She also mentioned how strong leadership skills she possesses while emphasizing her hard work and competency in managing skills. She was collared by the Outgoing President and was officially handed over club duties and responsibilities for the year 2022-23. After that the President, Rtr. Prasadie Karunarathne addressed the gathering while mentioning how privileged she feels for becoming the President for the year. She promised the members that she will give the club her best shot to take the club for greater heights and thanked the immediate Past President, Rtr. Hasanthi Premathilaka for all the time and effort she spent on improving the club.  She also conveyed her sincere gratitude to the Rotaract club of Institute of Chemistry Ceylon to where she started her Rotaract life. She concluded her speech by emphasizing the importance of team spirit and hard work that has to be within the club.

Afterwards the letter of appointment was given to the newly appointed board of directors year 2022-23 who are as follows; 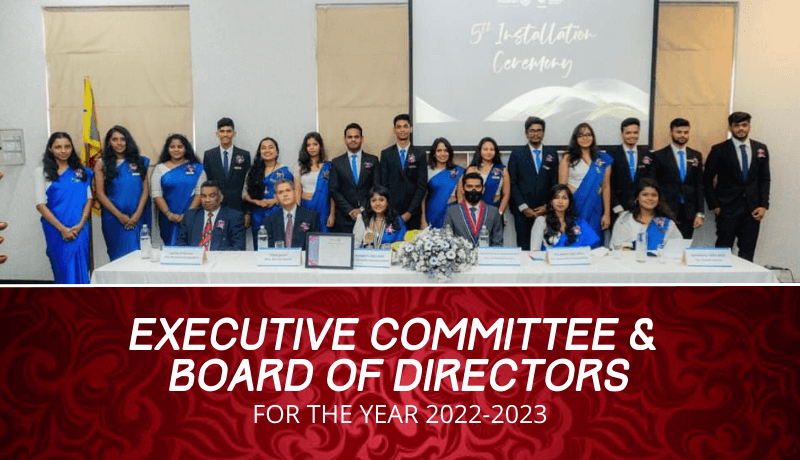 On the lineup, District Rotaract Representative Rtn. Rtr. PP Ahamed Hussain, Assistant District Rotaract Chair Rtn. PP PHF A. Numan Zarajudeen and other Chief Guests were invited to address the gathering. They admired the club for the work done throughout the year and wished a successful year ahead. Also they congratulated for all the outstanding achievements that the club could achieve so far. Following this, the Past President presented token of appreciation to the dignitaries. 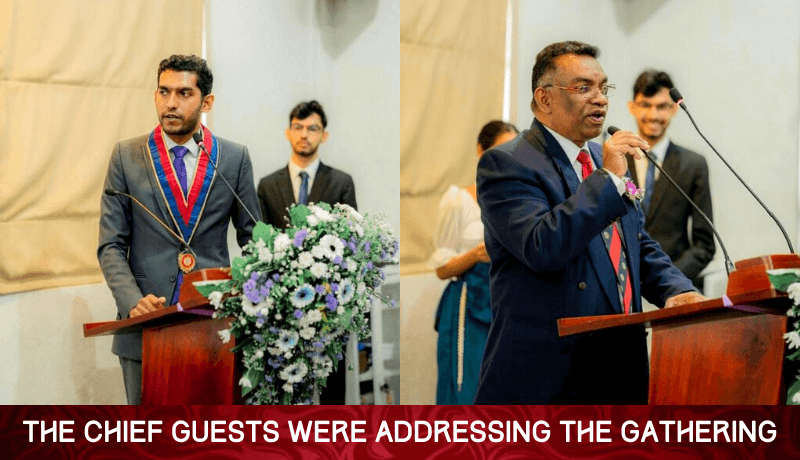 Making a new milestone, the 5th Installation Ceremony of Rotaract Club of Central Colombo was concluded with the felicitations done by the Rotaractors who represented their clubs. Marking the end of the proceedings, the Vote of Thanks was given which was followed by fellowship and refreshments. 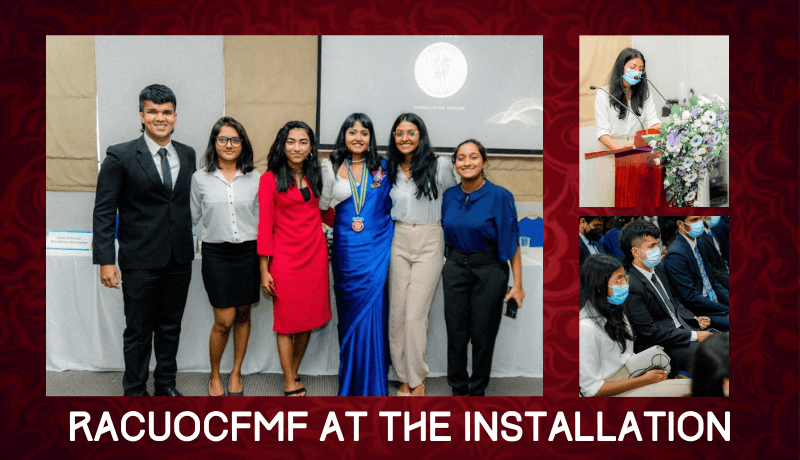 The Rotaract Club of University of Colombo, Faculty of Management and Finance would like to extend its warm wishes to, Rtr. Prasadie Karunarathne and her board for a Successful Year ahead! 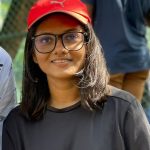