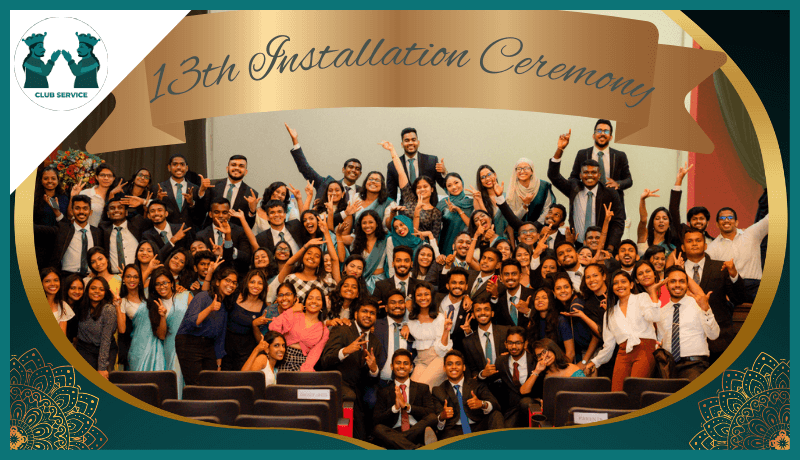 23 Sep 13th Installation Ceremony of Rotaract Club of University of Colombo, Faculty of Management and Finance

The world promises to raise you up and present you with chances when you fight for the betterment of all humanity. We at RACUOCFMF celebrated our opportunity, our legacy and our brave new story invited to emerge in stepping into the RI year 2022-23 with our 13th Installation Ceremony. The event happened on the 2nd of September 2022, at the Disaster Management Centre Auditorium from 6pm onwards.

The celebration commenced with the traditions of lighting up the oil lamp giving the feeling of the ever more wakefulness and awareness of the moment we have arrived at. Next, the house was called to order by The Sergeant at Arms Rtr. Visula Hareendra which was then taken up by the Co-Chair of the Installation Rtr. Thinali Rathnayake for the Routine Rotaract Formalities; The Flag Salutation, Rotaract Invocation, Four-way Test and Rotaract Song. 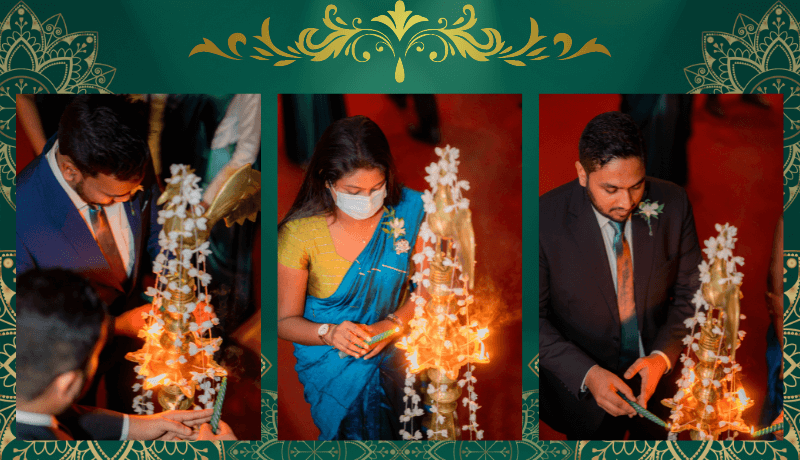 The distinguished gathering was then welcomed by Rtr. Chanuka Semith, Co-Chair of the Installation which was then followed by the Secretary’s report for the RI year 2021-22, presented by the Outgoing Secretary Rtr. Oshadi Dias. Through all her words that described every mission completion during the year under each avenue, we heard the calling of our era, the voice of well-reasoned sanity we shared, cared for, and showed our vulnerable hearts, to become the rays that brought soul-healing truths throughout a year. We served a society which was a puzzle in where we could only be the tiny pieces, but that we either fit or don’t, we responded thoughtfully and created the most colorful and memorable picture together. That inner feeling of pride within all FMFers during the Outgoing Secretary’s speech, grew the confidence on the new path we paved together for yet another celebration we’ll be making in a year. The video that continued her concluded report was overwhelmed with memories and moments that none of them in that screen thought they would be what they are! Not only for them, the vibe of satisfaction, cheerfulness, and giggles was spread out throughout the auditorium. 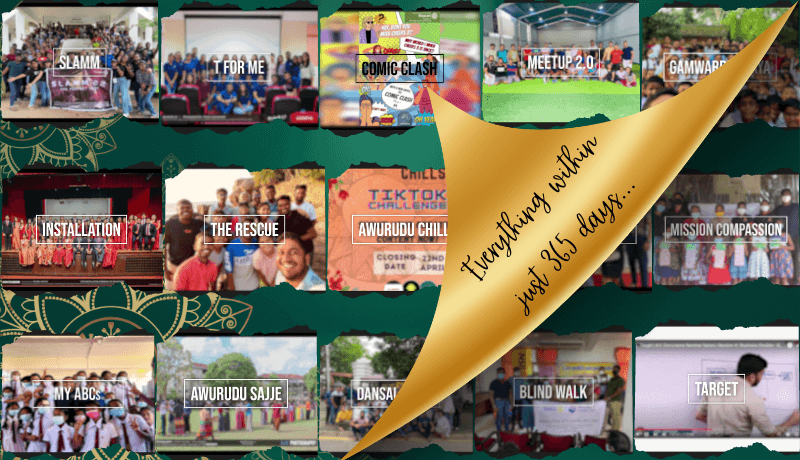 Through this epic journey of RACUOCFMF, it wasn’t about I helped you and you helped me, rather it was I helped him, you helped her, and because we all did that, there was help for all of us. We all have skills and areas of need, and when our skills matched the needs of another, we had the most wonderful feeling of joy in finding opportunity to help. The dream team of RACUOCFMF undoubtedly deserve that honor of being an amazing team which was led by a soul who walked that extra mile from mentoring his team members to being that one friend who holds you in every problem. The Outgoing President Rtr. Arshad Ismail was on stage to address his team and all Rotaractors for one last time as the President of RACUOCFMF.

He started his speech by proudly highlighting his biggest accomplishment for the past year in buying more time for his speech this time, which was cut short to five minutes in his speech as the Incoming President last year. However, he didn’t forget to thank each and every member of his Executive Committee and his Board of Directors for taking the club to where it stands today. The loving challenge he made to name a better bunch than his team beautifully depicted the place they had in his heart. He also shared how the club, previously known for the posh kids of Colombo broke its norm to open up for every individual at FMF from North to South despite their ability to express themselves in English. The word FMF, which he said is now an emotion that is greatly embedded in his heart, has come to its ending though he said he never wants to say goodbye. Rtr. Arshad Ismail then signed off officially through the loud applauds that raised to broad shared smiles of the audience and heavy hearts of FMF that would be missing him a whole lot. 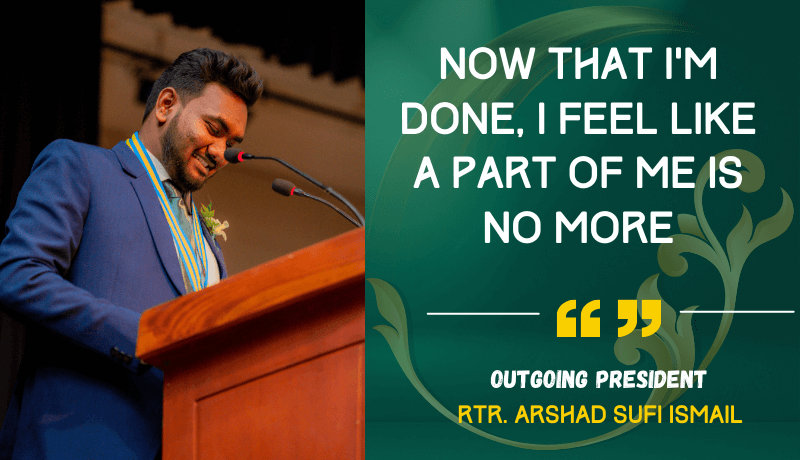 Next up were the most awaited moments of the day. More than anyone in the crowd, our Incoming President, Rtr. Gajaba Senarathne was more excited to know who had taken up to do the his introductory speech, and SURPRISE!, it was none other than Rtr. Gihini and Rtr. Sanjana. Rtr. Gajaba was introduced as “King of Galle” which is how he introduces himself along with that fondly called short form of his name ‘Gaji’. With that opening, this duo came out with so many facts about our Incoming President which included that he is a dying heart Galle person which was not much of a secret and surprising. But it was surprising to know even the green ties the boys were wearing at the Installation were from Galle! He also owns a unique set of vocabulary like ‘Theruna Mahaththaya’ which is kind of his thing. The laughter of everyone was like ripples in a pond that radiated outwards through the hall of the crowd which soon became great waves of hilarity. All in all, Rtr. Gajaba was also known for his unique way of thinking, a beautiful mindset, and as a good listener. 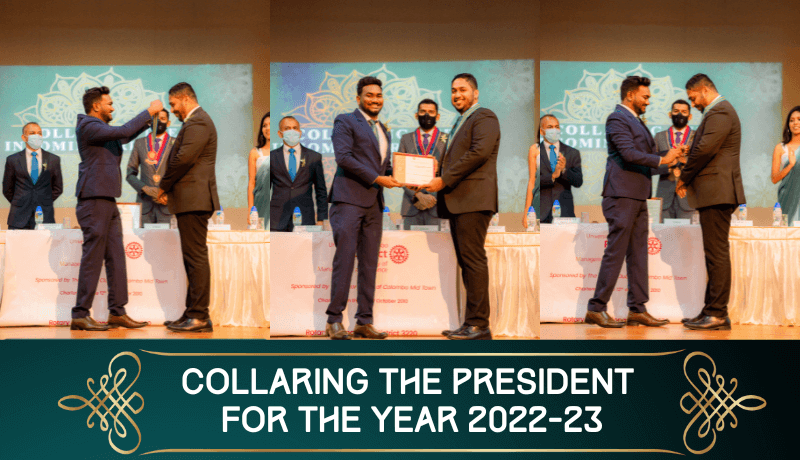 Upon the loud laughter, the more important and the most awaited moment of the day arrived, as Rtr. Gajaba Senarathne was gracefully collared as the President of RACUOCFMF for the RI year 2022-23. The new journey that we just embarked upon would not begin as a gift with gorgeous ribbons and the promise of security; rather, it begins as an adventure with a little fog and cold. And thus, it takes the daring eyes to remain open to its curves and undulations, the brave feet to travel it, and the adventurous heart to grab it, that we believe Rtr. Gajaba Senarathne, is well capable of. So, we wish our dearest President, Rtr. Gajaba Senarathne all the very best for the journey we just embarked upon! 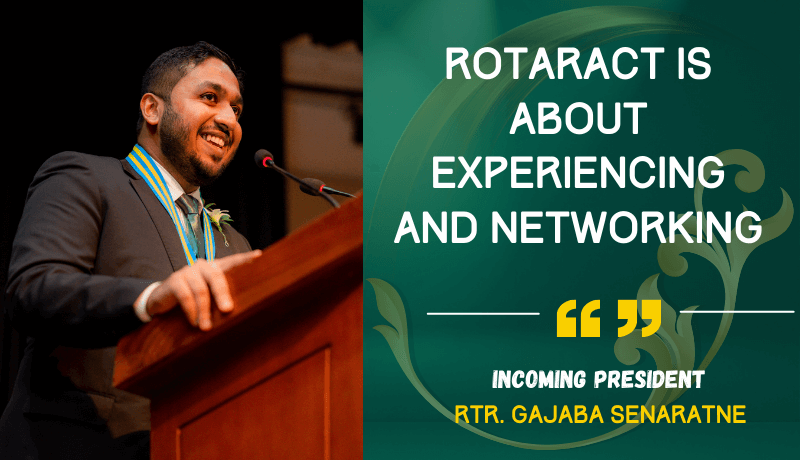 Next up, the Incoming President, Rtr. Gajaba Senarathne was on stage to address the gathering. He shared how he didn’t know what Rotaract was in the first place, and now he realizes how it helps in experiencing and networking. And he was proud of the vibrant and diverse membership of the club that expanded from Galle to Jaffna within the club. Concluding his speech, he introduced the Executive Committee and the Board of Directors for the RI year 2022-23, which was as follows.

The Executive Committee and the Board of Directors were proudly standing on the stage, with the rocket fuel of passion combined with determination of raising the club to greater heights. That is when you volunteer for something bigger than yourself, to bring goodness to others. 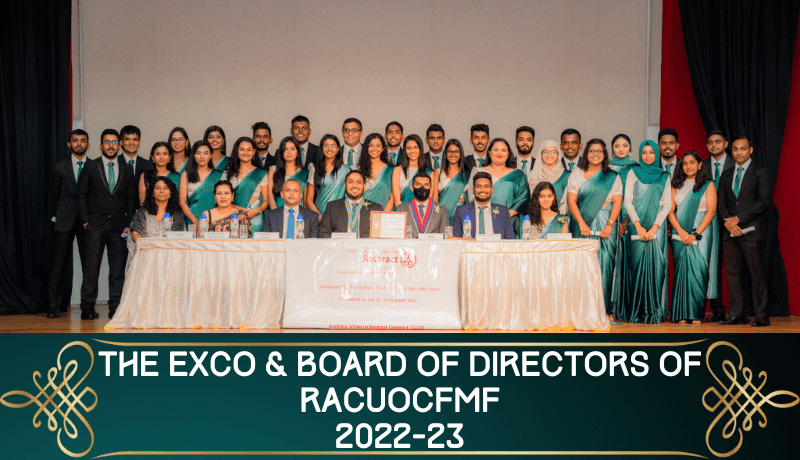 Next the teams behind the content for the year, The Blog Team and the Editorial Team were also introduced on stage. 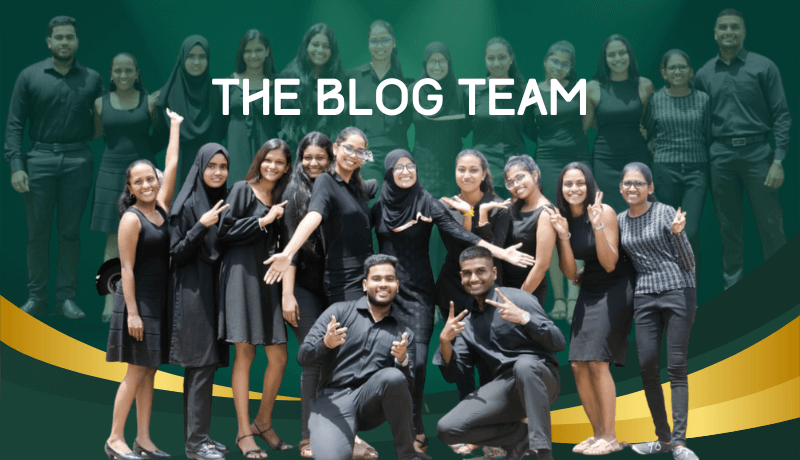 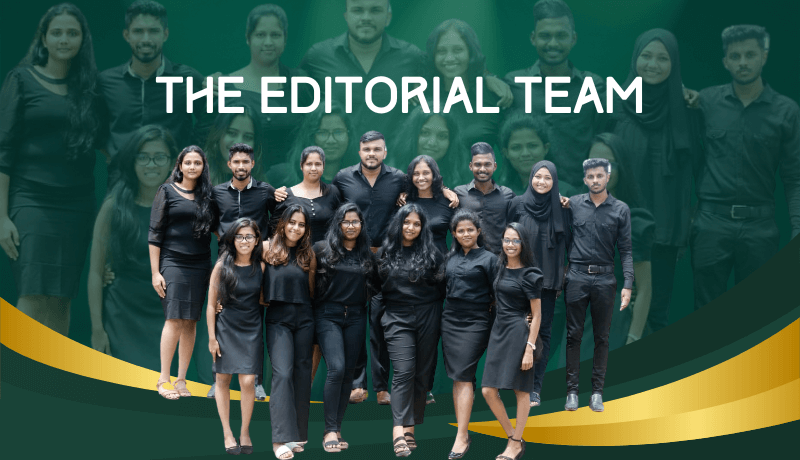 Moving on, the District Rotaract Representative Rtn. Rtr. PP Ahamed Hussain addressed the gathering. He congratulated Rtr. Arshad Ismail for a job well done last year while wishing the best of luck to the Incoming President and his Board of directors. 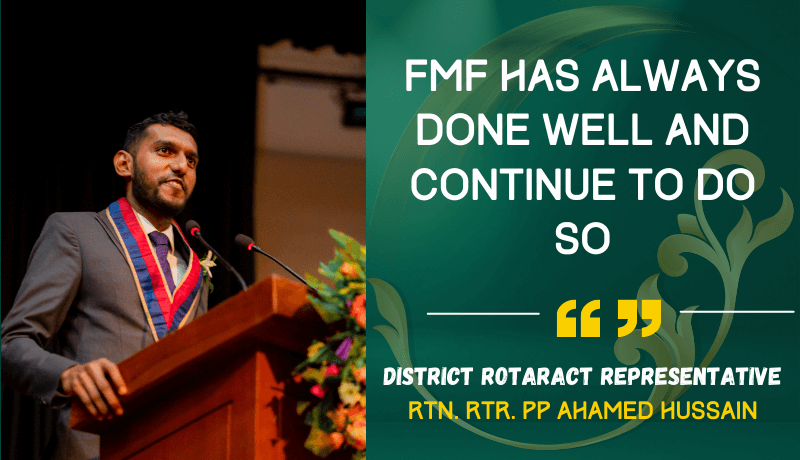 Amidst some formal stuff FMFers being a Jolly bunch, needless to say does not have a day that goes by without some rhythm in the schedules. Our very own club’s musical experts were invited on stage to captivate the audience with their talent and without doubt they tempted all the energetic souls sitting out there to step up for a dance which was controlled hard by themselves to not stand up for it, but just go with the rhythmic claps. 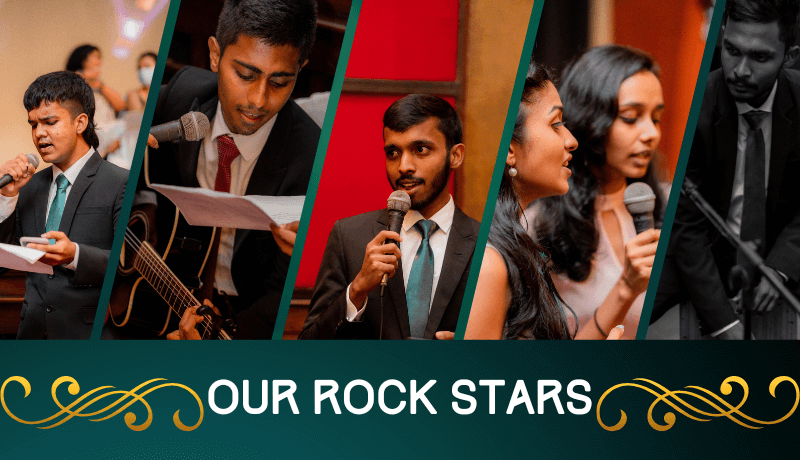 Following a well enjoyed moment with the flow of music, the Chief Guest for the evening, President of Rotary Club of Colombo Midtown, Rtn. Dhamitha Pathirana and The District Rotaract Chair, Rtn. PP Farzana Khan was on stage to address the gathering where they appreciated all the wonderful initiations and attempts taken towards the betterment of the needy.

How to not appreciate the support and guidance given to be what we are! The token of appreciation was a little thing that told all those amazing people a huge thank you for being there for us which was followed by the felicitation that was made on behalf of the entire crowd of well wishers. Not forgetting to thank everyone who was presented at the evening, Incoming Secretary Rtr. Samindi Weerakoon delivered the vote of thanks. With that the proceedings of the day were done and the Annual Installation Ceremony of RACUOCFMF was adjourned by the Incoming President Rtr. Gajaba Senaratne.

But that ending was just for the day, and a beginning of an era! Congratulations to those Dream Teams of RACUOCFMF who accomplished their mission in the best way beyond expectations and who are going to do the same in the year ahead continuing that legacy. Cheers!