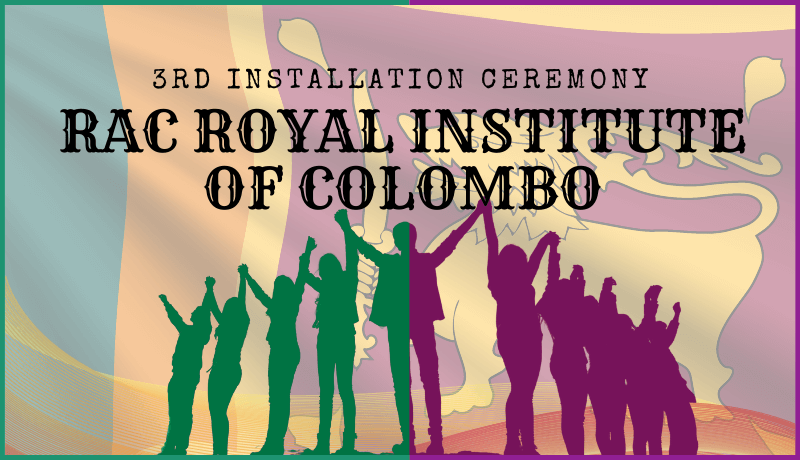 Posted at 21:20h in Installations, Others, Uncategorized by rcuocfmfadmin 0 Comments

In celebration of another glorious journey walked and the commencement of another, The Rotaract Club of Royal Institute of Colombo was back with its 3rd Installation Ceremony that was commenced by tradition of lighting the oil lamp on the 20th of August of 2022 from 1.00 p.m. onwards that lasted for 2 hours and a little bit more as all the way they came and the journey was a bit too big to fit into that time frame. Rtr. Afkar Saleem, Rtr. Ali Hussain, Rtr. Zahra Zuhri, Rtr. Alysha Sabana, Rtr. Piravena Paheerthan, Rtr. Hasna Imthikab, and Rtr. Althaf Zulfan joined in this celebration representing the FMFers at this memorable event. After the house was called to order by the Sergeant-at-Arms Rtr. Abhishek Dharmawardena, all rose for the national anthem which was followed by the Conventional Rotaract formalities: The Flag Salutation, Rotaract Invocation, Four-way test and the Rotaract song lead by the Co-Director of Club Service Rtr. Daniel Canisious as a Co-Chair. 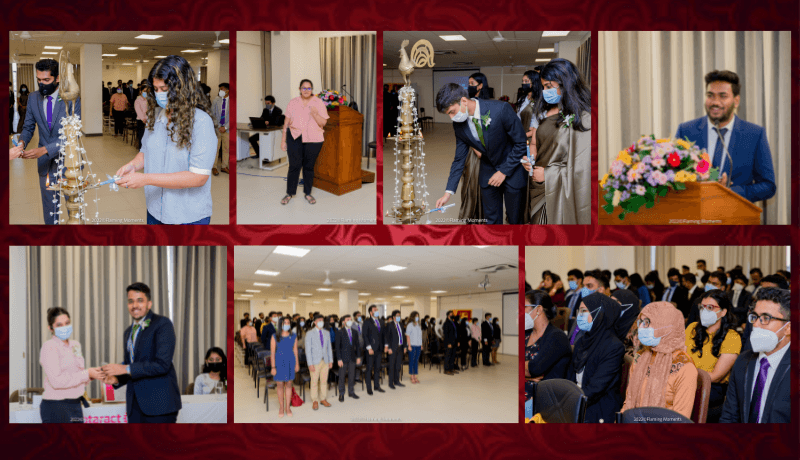 How to begin the evening without welcoming that gathering of dignitaries and overwhelming fellowship. Rtr. Yadusha Ravindran – Co-Director of Club Service accomplished this as a Co-Chair of the Installation Ceremony that was followed by one of the most spotlight moment of the evening, presenting of the Secretary’s Report for the year 2021-22 by the outgoing Secretary Rtr. Imaad Ishar. He covered all the significant milestones they passed as a team which included that they successfully pulled off 30+ projects both physical and online.  He did not miss to address each avenue and some wonderful initiatives such as Perils of the pearl, 12 days of Christmas, Vanajeeviyo, Escape Room, Project 360, Book for Thought and many more that impacted lives in becoming better. Somehow managing to compile memories of a year into one video that followed the report, Rtr. Imaad Ishak signed off as the Secretary for the RI year 2021-22 mentioning that, ‘All these projects not only served the society but also created bonds and memories to cherish forever’.

Next stop was for the captain of the ship – Rtr. Himaza Hilmy, the President of RACRIC for the year 2021-22 to spill out her heart of the roller-coaster year as she said. After hearing how much she had to tell, it was understandable why she was not in need of prepared words. She indeed had loads of thank you stacked, and started off trying hard not to miss simply anyone who supported her in being what she is. After conveying her heartfelt gratitude to a number of people of that list, saving the best for the last and again but not the least, she had no words enough to thank Rtr. Arshad Sufi Ismail for being her Rotaract 119 and pulling her through all the thick and thin. Eventually she winded up her speech as the Outgoing President congratulating Rtr. Imaad Ishar and his team to take the club to greater heights. 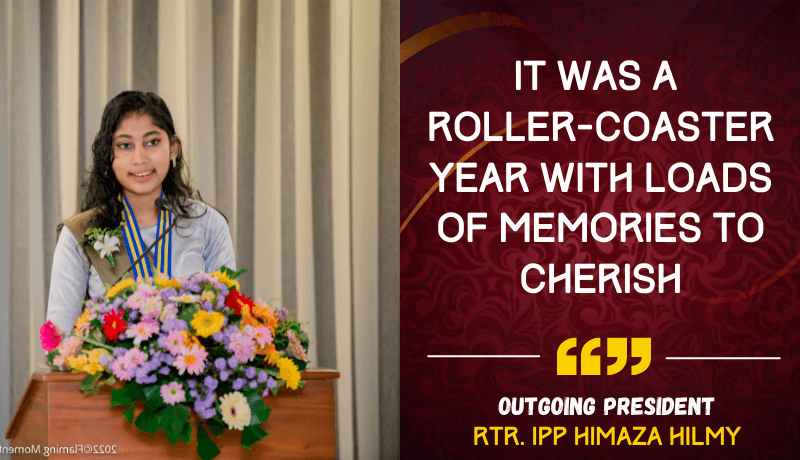 Then walked the Secretary for the RI Year 2022-23 Rtr. Vaishnavie Logeswaran who was the generous one to do the intro of the incoming President, as he does not have much friends (And also as he is single). She started off with the fun fact that her google form of the Secretary Application was filled by himself, and was not able to share half the memories they cherish in a public forum she continued. She also mentioned that Imaad would say secrets that everyone would be aware of the very next day. Coming to the end of her fun filled intro, his beloved Secretary expressed that they were fortunate enough that he commenced the installation on time which gave the crowd a hint of another side of her President. Overall, she conveyed her heartfelt wishes on his appointment and concluded her intro of the Incoming President Rtr. Imaad Ishar. 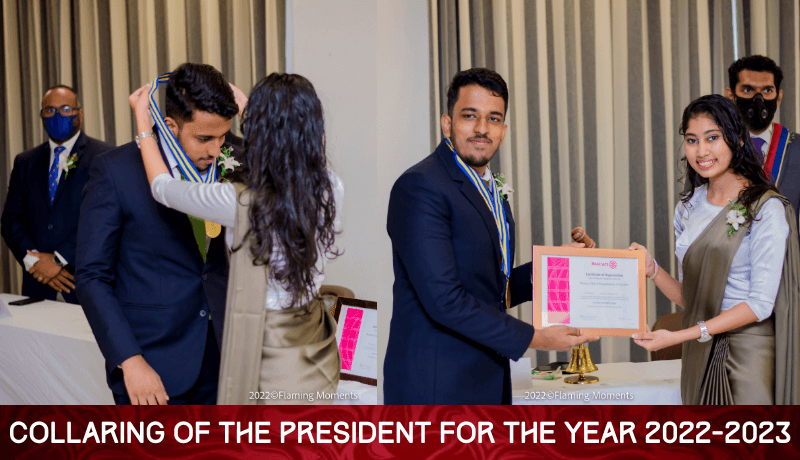 Rtr. Himaza Hilmy gracefully collared the Incoming President and handed over the responsibilities of the club whereas there onwards, Rtr. Imaad Ishar was officially the President of RACRIC for the Rotaract Year 2022-23. Then it was his turn to address the gathering where he shared three lessons taught by Rotaract which found him when he needed help the most namely, A single act of kindness could change a life, Not all days are bright, but it is the way you look at it, and If we work together we can conquer any mountain. He also introduced the theme of the year and thanked a bunch of individuals in Rotaract for making a whole lot of things possible. 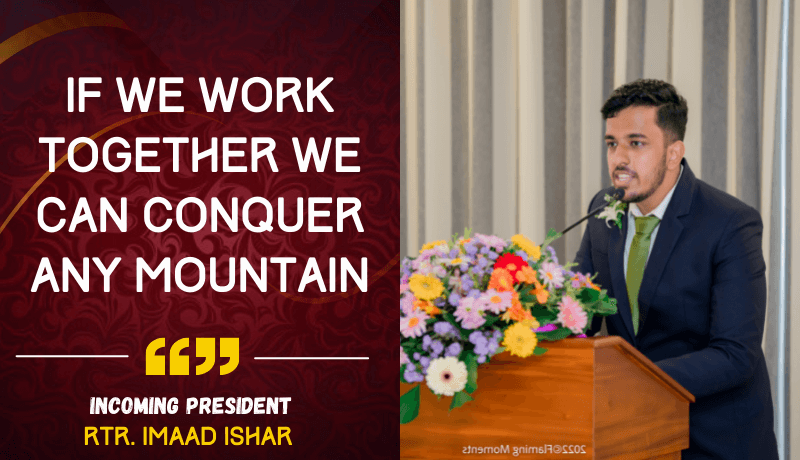 Finally it was time! Time to introduce the leading crew of the ship for the upcoming year.

The Executive Committee and Board of Directors for the year 2022-23  are as follows; 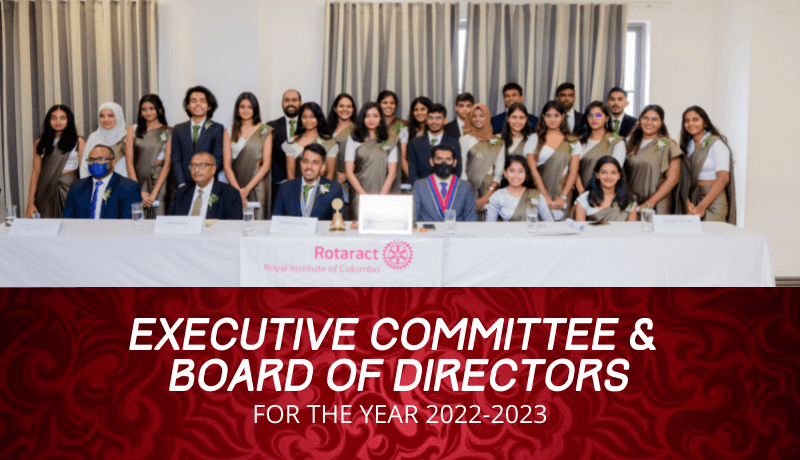 Next up, the stage was for the District Rotaract Representative, Rtn. Rtr. PP Ahamed Hussain who was at his 2nd Installation Ceremony out of three for the day. 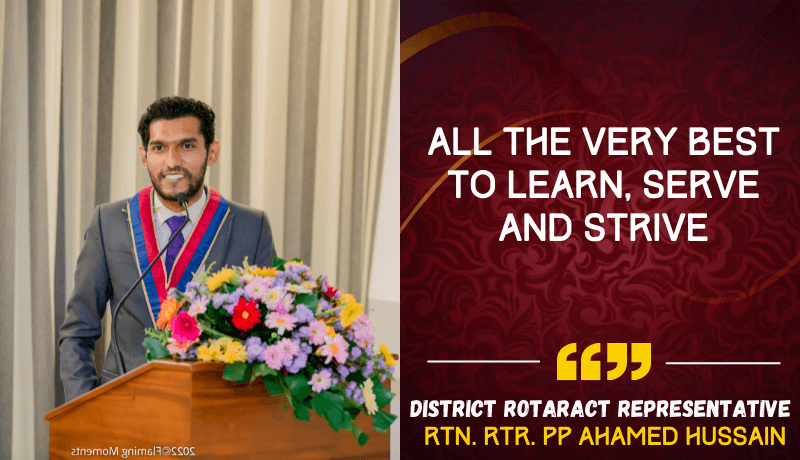 He congratulated them for the job well done last year and wished them all the very best for year ahead to ‘Learn, Serve, and Strive’. He also added, that they are always ready to help them out at moment of need. 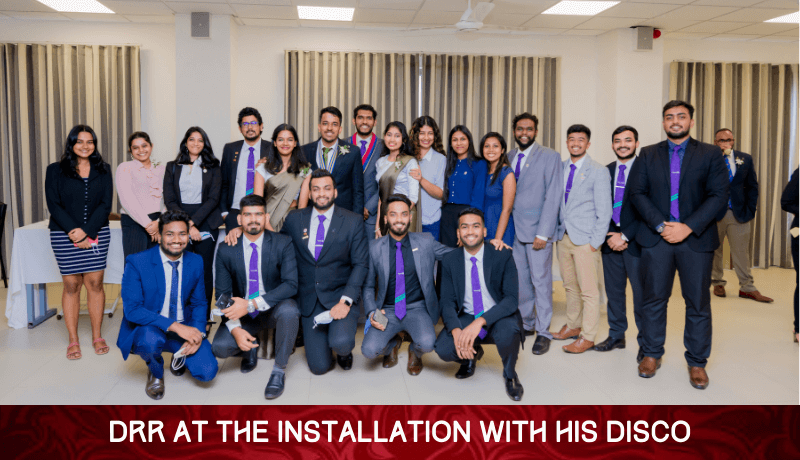 Amidst all the formal proceedings, moments were spared for some melody as well which enlivened the evening. The melody of the song, ‘I walked across an empty land’ mesmerized the auditorium which was continued with another wonderful song ‘Someone you loved’ that were sung live.

Back to the proceedings, Assistant Rotaract Chair Rtn. PP Danushka Fernando addressed the gathering and mentioned that it was an eye opener to listen to all of them where he identified so much potential and capabilities within. He also gave some insights of Elevate Rotaract and the doors that would open through it. Finally, he concluded by congratulating the outgoing board and wishing best of luck to Rtr. Imaad and his Board of Directors.

Following up was the address by the Chief Guest Rtn.  Ganeshwaran Pillai. He started by saying that he was jealous of them as sky was their limit. He continued with a Zen saying that said, ‘Every long journey starts with a small step; and eventually concluded with a quote from the Bible that said 'If you can't love someone you see,  how are you going to love God who you haven't seen' after mentioning the five important things for the club to go higher.

Appreciating the presence of all the Guests of Honor, a little greenery was presented as a memento to them by Rtr. Imaad Ishak that  was followed up by felicitations from fellow clubs where Rtr. Piravena Paheerthan conveyed the wishes of RACUOCFMF on behalf. It cannot be denied that the lovely felicitation of Rtr. Arshad Sufi Ismail stole the show.

Eventually, coming to the end of another memorable day, the Secretary Vaishnavie Logeswaran delivered the Vote of Thanks followed by the adjournment of the meeting for refreshments and fellowship by the President Rtr. Imaad Ishar. 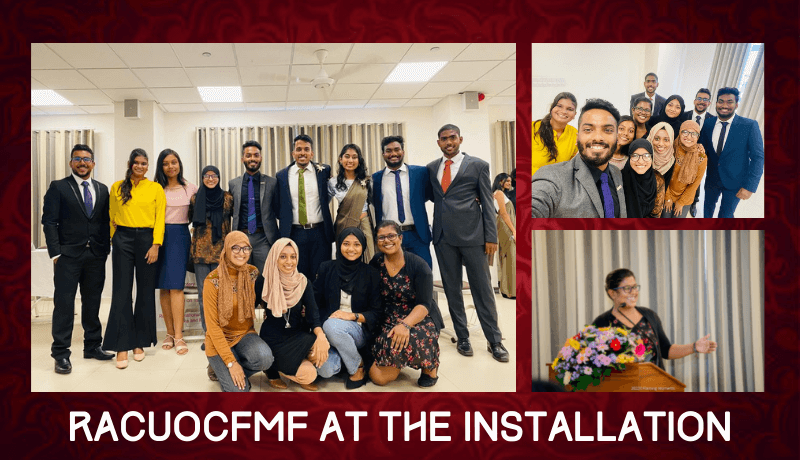 The Rotaract Club of University of Colombo Faculty of Management and Finance would love to convey their heartfelt wishes to the Incoming President Rtr. Imaad Ishar and his Board of Directors to continue their marvelous job of making lives better and days brighter again for another year and more! 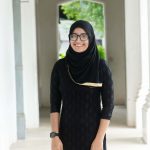