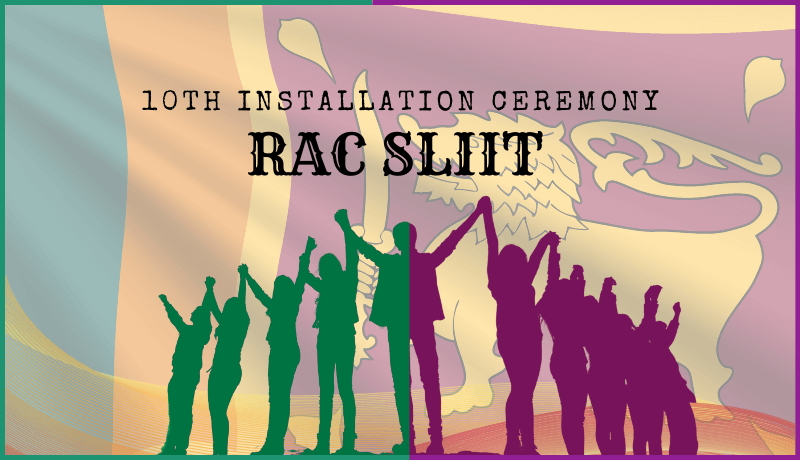 Posted at 14:46h in Installations, Uncategorized by rcuocfmfadmin 0 Comments

The 10th Installation Ceremony of the Rotaract Club of SLIIT was held on 21st of August 2022, from 3.00 pm onwards at their main auditorium. Representing RACUOCFMF Rtr. Hasara, Rtr. Isha and Rtr. Jalani attended the ceremony to congratulate the upcoming board.

The ceremony was formally commenced after the traditional oil lamp was brightened by the dignitaries. Then Rtr. Rishini Bandaranayake started off the event with the Routine Rotaract Formalities; Flag Salutation, Rotaract Invocation, Four-way test and the Rotaract song. Then all the guests, Rotarians and fellow Rotaractors, were warmly welcomed by the project co-chairperson, Rtr. Dewmi Siriwardhane and Rtr. Kavindu Edirisinghe. The host then turned the audience’s attention to an interesting video of the Incoming President. 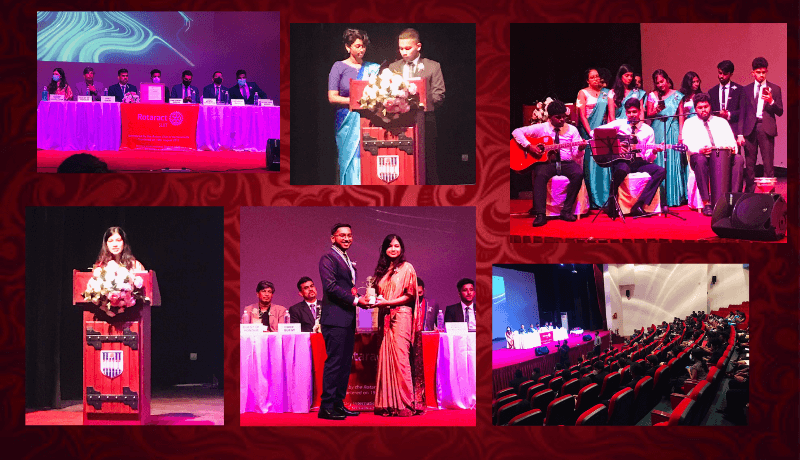 Next, the Outgoing Secretary, Rtr. Randima Fernando, presented the secretary’s report for the RI year 2021-22. He elaborated that during the past year, the Rotaract Club of SLIIT was able to successfully complete 53 projects across all the major avenues. He highlighted some major projects that were undertaken by the club such as RotaVerse, MELOMANIAC, Socius 21, Let them bloom, Christmas for everyone, Arogya, and Raktha during the challenging RI year 2021-22. He emphasized how their club’s commitment and perseverance inspired them to actively participate even throughout the pandemic period. The secretary then expressed their sincere gratitude to everyone who helped them over the RI year of 2021-22.

Afterwards, the Outgoing President Rtr. Nimsara Fernando, was invited to share a few words about his year of presidency. He seized this opportunity to thank his board of directors, friends, and family for all the support that they have given him throughout his journey. Specially, he gave his heartfelt gratitude to each general member of the club, and mentioned how important the general members are for the club, even more than the president. Then he concluded his speech wishing to the incoming president and his board a successful year. 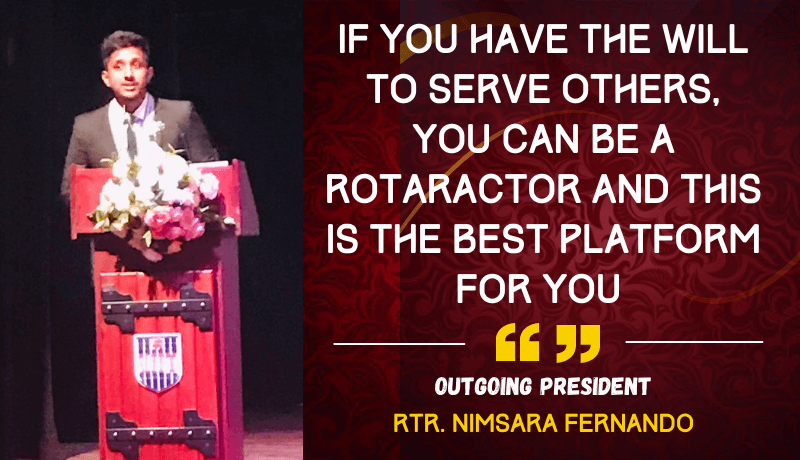 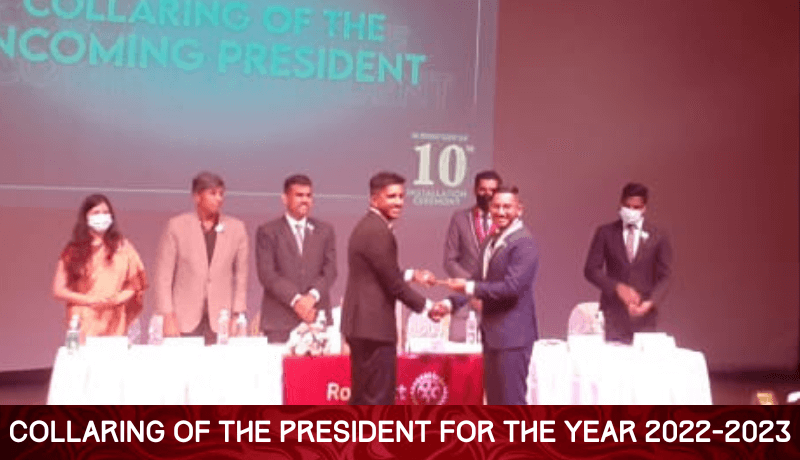 Afterwards, the newly appointed President Rtr. Lathushanan Koneswara, addressed the gathering. He reminded a saying by Martin Luther King which was, “There is nothing greater than doing something for others” and briefed his vision and the theme for the RI year ‘To strive to empower life’ and concluded his address by introducing his phenomenal executive committee and board of directors for the RI year 2022-23. 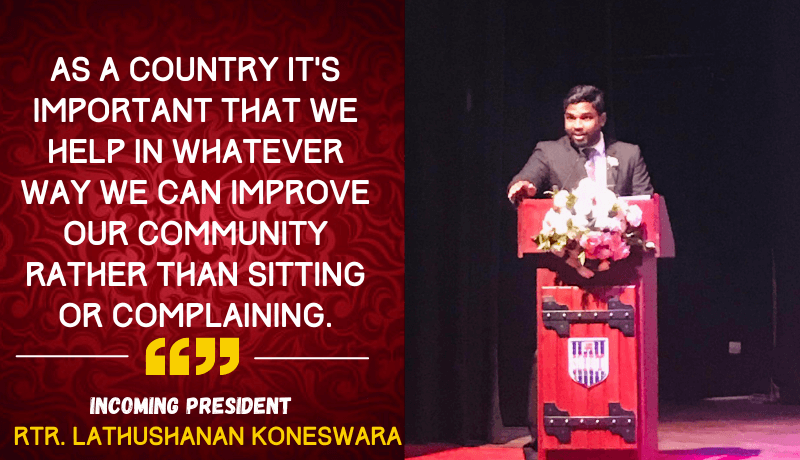 Executive Board and Board of Directors for the RI year 2022-23, is as follows. 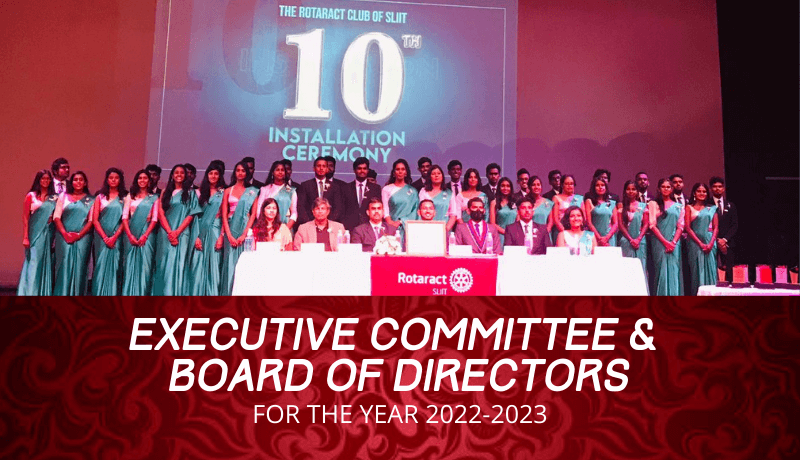 After that, the District Rotaract Representative Rtn. Rtr. PP Ahamed Hussain addressed the gathering, and he appreciated the tremendous work of the club throughout the pandemic. Then he ended his speech by wishing Rtr. Lathushanan and his board a successful year. Afterwards, the gathering was addressed by the Guest of Honor of the evening, Rtn. PP Rohan Amrithiah and the Chief Guest, Mr. Uditha Gamage. 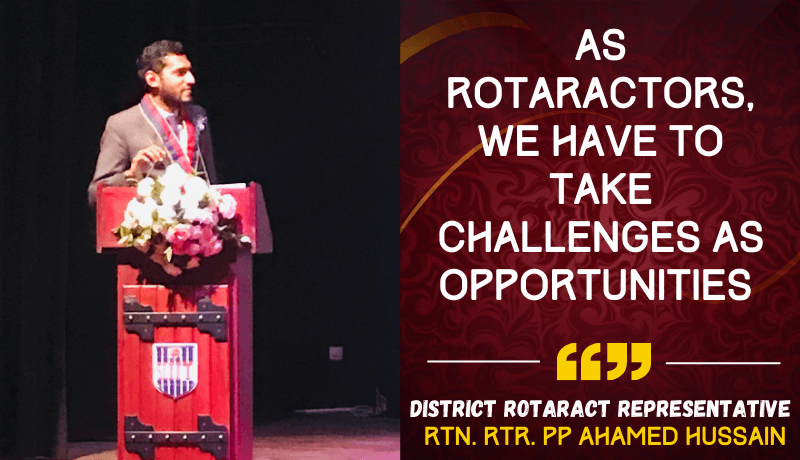 At the end of the ceremony, the floor was opened for felicitations, and there were many more greetings from fellow Rotaractors, Rotarians, and other Rotaract Clubs. Finally, to conclude the ceremonial proceedings, the vote of thanks was given by Rtr. Manisha Alwis, the Secretary for the RI year 2022-23.

The Rotaract Club of the University of Colombo, Faculty of Management and Finance (RACUOCFMF), would like to extend its warm wishes to Rtr. Lathushanan Koneswara and his Board for an amazing and fruitful year ahead! 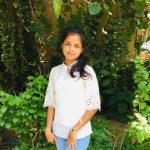 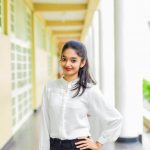 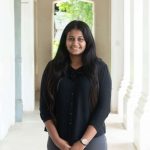